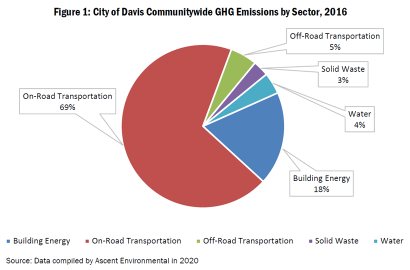 The City of Davis is continuing our work and outreach efforts for the 2020-2040 Climate Action and Adaptation Plan (CAAP). This plan will identify a roadmap to measurable, enforceable, equitable and implementable community actions to reduce carbon emissions and increase community resilience.

Community values and components that make Davis unique are being integrated into the CAAP planning. The CAAP will pursue creative and innovative solutions that improve community quality of life and economic opportunity, while meeting obligations for climate action, adaptation and realistic fiscal and resource assessment.

The CAAP will bring Davis into compliance with state legislation related to climate action and General Plan requirements. Additionally, in the short term, the CAAP will identify efforts to implement these actions by 2030, in alignment with state goals. CAAP technical assistance is being provided to the project management team by Sacramento-based consultant AECOM.

The 2020-2040 CAAP is an update to the 2010 CAAP. It is also a response to the March 2019 Resolution Declaring a Climate Emergency and Proposing Mobilization Efforts to Restore a Safe Climate’ adopted by City Council. This resolution committed to an aggressive goal of attaining community carbon neutrality by 2040, five years ahead of California’s 2045 target, and ten years ahead of Davis’ previously adopted 2050 target

Currently, the project management team is evaluating and selecting the highest priority actions to include in the CAAP. The draft list of potential actions was identified through input during community outreach and will be brought to the community for review prior to finalizing the CAAP.

The City project team has now completed six community workshops to gain input and identify community values related to the CAAP. An introductory workshop on Earth Day April 2021 had over 100 participants to discuss responses to climate risk and desired CAAP co-benefits. This was followed by a Community Resilience and Equity workshop in May, which included two panels of local community members speaking about their lived experiences and providing recommendations for addressing inclusion and diversity in the Davis context.

The workshops used an interactive ‘whiteboard’ program called Mural that allowed community members to either make comments directly into the boards online or to discuss them in the workshop and have staff assist with entering their comments. In addition to the virtual workshop times, the Mural boards were open for additional comments for up to a month until August 20. While the boards are now closed for comments, they are still available for viewing on the website.

The project management team has met with a number of key individuals and groups related to developing a CAAP that is responsive to equity and inclusion issues in the Davis context. These other forms of community input have included discussions with vulnerable community members and historically underrepresented groups, tabling at the Farmers Market, completion of two online surveys, staff presentations at community partner meetings, and communications via email to the project management team.

The two online surveys provided information from over 400 community members. Additionally, CAAP updates are provided at public meetings, including regular presentations at the Natural Resources Commission (NRC). Monthly CAAP staff reports are provided to all other City commissions, and each commission is invited to appoint a liaison to attend the NRC meetings and participate in CAAP discussions.

All of the potential CAAP actions identified throughout this engagement process were collected into a long list of close to 1,000 actions for consideration. The next section describes the process to winnow those actions into a list of prioritized actions for the 2020-2040 CAAP.

The process to select specific actions to include in the 2020-2040 CAAP is based on the knowledge that a focused group of actions is more likely to result in successful implementation than a long list of 50, 100 or more actions. Because there is not an unlimited budget or staff capacity, the intent is to select the optimal list of prioritized actions to identify Davis’ path to carbon neutrality.

Although not all cities go through a prioritization process, the most successful, implementable climate action plans are based on determining which actions are supported by the community and are in alignment with the City’s overall implementation policies. Therefore, the City is using an action evaluation process that is methodological and transparent.

The process being used is the ‘Action Selection and Prioritization’ tool (ASAP) that was developed by AECOM for C40 Cities, which is a network of global cities committed to addressing climate change, collaborating effectively, sharing knowledge and driving meaningful, measurable and sustainable action on climate change. The ASAP tool was developed to implement a systematic evaluation approach with the objective of prioritizing actions most applicable to a specific community.

There are many aspects to consider when comparing climate actions. First is to consider Davis’ primary CAAP goals, which are greenhouse gas (GHG) emissions reduction and response to climate risk. To attain these goals, both ‘adaptation’ and ‘mitigation’ actions must be addressed. Adaptation means adjusting to the current and future effects of climate change (dealing with effects), and mitigation means making the impacts of climate change less severe by preventing or reducing the GHG emissions (dealing with root causes). In a leaking boat example from the Climate Reality Project website  (https://www.climaterealityproject.org/), adaptation is pouring water out to stay afloat in the moment, and mitigation is sealing the leak to halt more water coming in.

Back to the unfiltered 1,000 recommendations from community input mentioned above, the team first analyzed these items to create a draft list of approximately 100 discrete actions to be evaluated further in the ASAP tool. The team reviewed all comments received and organized them topically to find areas of overlap where multiple commenters shared similar ideas. Groups of similar comments were then summarized into one to two discrete actions. Next, the team reviewed for comments that were provided at a level of detail greater than what is typically thought of as an action. In these instances, a new proposed action was written that could encompass those more detailed ideas, and the original comments were then marked as potential implementation steps and can serve as a reference library for the implementation roadmap development phase of the project. The team flagged a small number of comments to be set aside, which either did not state or imply an action idea or were off topic for the scope of the CAAP. Finally, the team reviewed the draft list of actions to identify gaps related to the GHG inventory sources and climate hazards and drafted new potential actions in response as needed.

The ASAP tool helps incorporate other community values into the evaluation, in addition to the primary goals of GHG reduction and addressing climate risk. These additional values are often called ‘co-benefits,’ such as job creation and economic development, water conservation or more parks, open space and trees.

The top three co-benefits for Davis were identified through community input as:

In the ASAP tool, these co-benefits were rated for all actions on a five-point scale— very positive, somewhat positive, neutral, somewhat negative or very negative. Also, different criteria can be weighted as more significant, if desired. For Davis’ evaluation, the ‘equity and inclusion’ co-benefit was ranked higher than other co-benefits because of the importance to the community.

The ASAP tool also allows user to consider action implementation feasibility to understand relatively how easy or hard an action will be to implement. The City chose the following feasibility criteria to evaluate each draft action:

After rating all draft actions for each evaluation category —GHG reduction, climate risk assessment, co-benefits and feasibility rankings—the ASAP tool creates graphics and bar charts to assist in identifying the top actions. Note that the tool does not provide ‘answers’ in the form of an automatically prioritized list of actions, but instead provides information so that decision-makers can make conscious efforts to select appropriate priorities.

Next, the draft priorities will be shared with the City’s internal CAAP team, the Natural Resources Commission, the staff report to all City commissions, in small group meetings with local stakeholders, and at the upcoming community workshop, which is scheduled for Wednesday, Nov. 10, at 5 pm. At these venues, we will explain how we got to the prioritized actions, and ask the question, “did we get it right?”

The final CAAP will have approximately 25-30 prioritized actions that are assessed in some detail and will also include the full list of the top 100 actions. CAAP implementation will be an iterative process with ongoing opportunities for assessment of progress and the ability to update priorities. Along with interim progress evaluation, updates and adjustments as needed, the CAAP will be revisited every five years.

After completing the draft 2020-2040 CAAP, we will initiate environmental review (such as an Environmental Impact Report, EIR) in early 2022, in conformance with the California Environmental Quality Act (CEQA). The CAAP will position the City to incorporate CAAP information into the General Plan Update, including the Safety Element and sustainability issues throughout the General Plan and will provide a robust and consistent plan on which to base future project CEQA documents. Final CAAP adoption by City Council is anticipated by mid-2022.

Information about the 2020-2040 CAAP, workshop and meeting videos, answers to frequently asked questions, and more is available on the City’s webpage at cityofdavis.org in the Spotlight section on the home page.

You can contact the CAAP project management team, Dianna Jensen, City Engineer and CAAP Project Director, and Kerry Loux, Sustainability Coordinator and CAAP Project Manager, at the dedicated email address, CAAP@cityofdavis.org, with any questions or comments about the project. 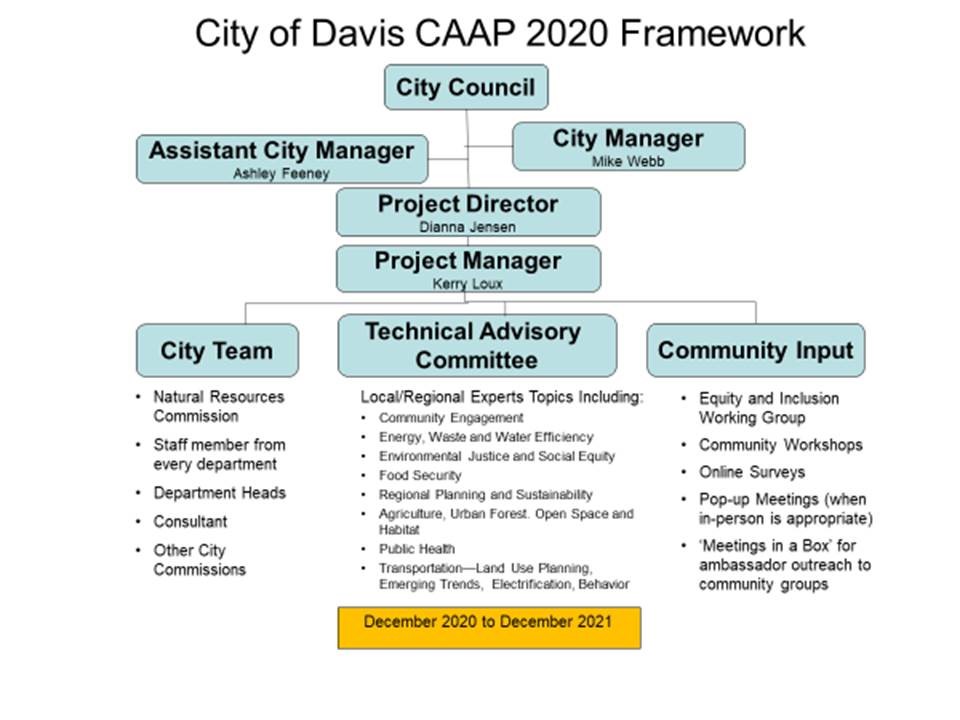