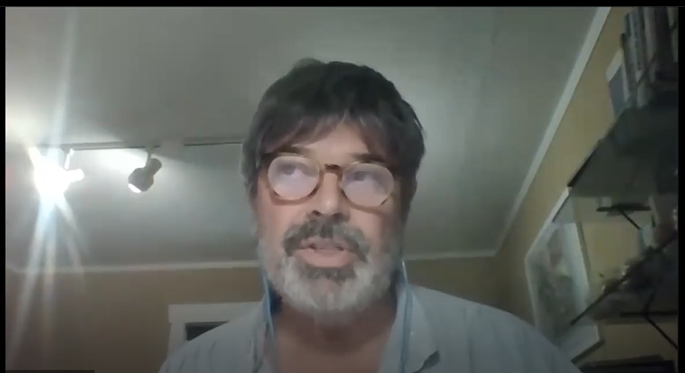 The Cool Davis Coalition engaged several speakers and neighborhood leaders on the topic of neighborhood-level resilience at its quarterly meeting in August. Sascha von Meier of the UC Berkeley EcoBlock program and Mark Lakeman of Communitecture in Portland, Oregon, presented compelling projects on both ends of the technological scale, from block-level micro-grids to the details of placemaking. The main theme to these presentations and others was the “sweet spot” of tackling resilience at the neighborhood and even block level.

Davis City Council member and Vice Mayor Lucas Frerichs presided over the presentations and panels, Chris Granger led the half hour Coalition business meeting at the beginning of the event, and Robin Kozloff read the land acknowledgement. Lorenzo Kristov opened with a definition and overview of resilience and the layers at which it resides. Three neighborhood representatives responded to the ideas after some helpful context. Lorenzo has been an avid advocate for micro-grids here in Davis and serves on the Cool Davis Coalition Steering Committee with Robin Kozloff, who is  an active and vocal leader in Davis Manor neighborhood community development projects.

In his opening remarks, Lucas recognized the timeliness of the topic. He commented having read the most recent IPCC report that there is an “alarming pattern” and that “the coming climate catastrophe is upon us. Community and neighborhood resilience is one of many ways to combat climate change.” For the full recording of the Coalition meeting for the third quarter of 2021, visit the video on the Cool Davis YouTube site: LiveCoolDavis.

Lorenzo Kristov, who has worked in the energy policy arena for over three decades, began his presentation by defining resilience as “the ability to maintain essential quality of life functions and perform emergency services when a severe stress or disruption occurs” and relayed his post-doc realization that our economics is predicated on consumption but consuming more is damaging the environment. 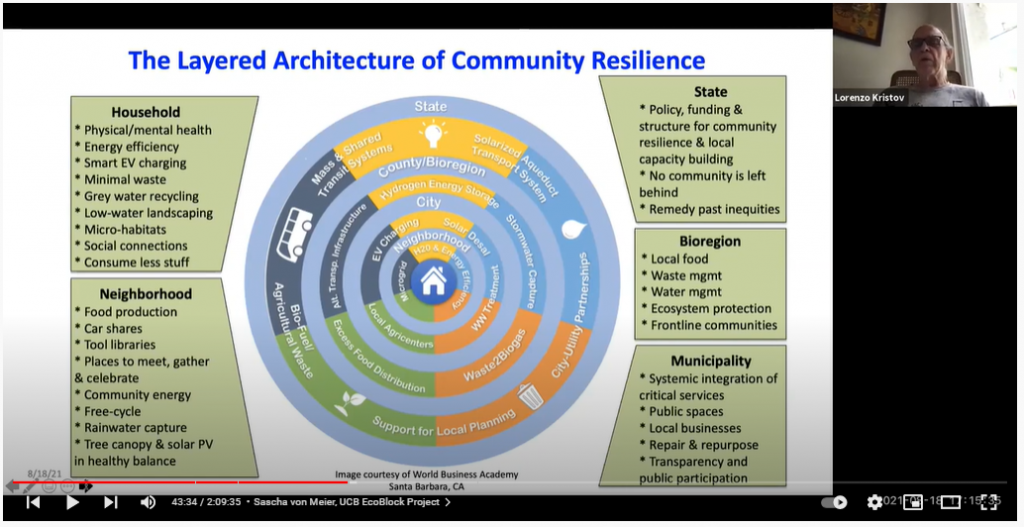 Sascha von Meier, adjunct professor of electrical engineering and computer science at UC Berkeley, laid out the details of an experimental neighborhood level micro-grid program in Oakland dubbed the EcoBlock. The program has engaged in a radical retrofit of 33 existing homes to improve resilience, sustainability, and quality of life for community members. Built firmly on a foundation of block-scale shared energy, mobility, trust, and governance, the project is headed for construction in early 2022. The project started with individual home assessments and has already weathered the test of community decision-making with the selection of stormwater mitigation approaches. 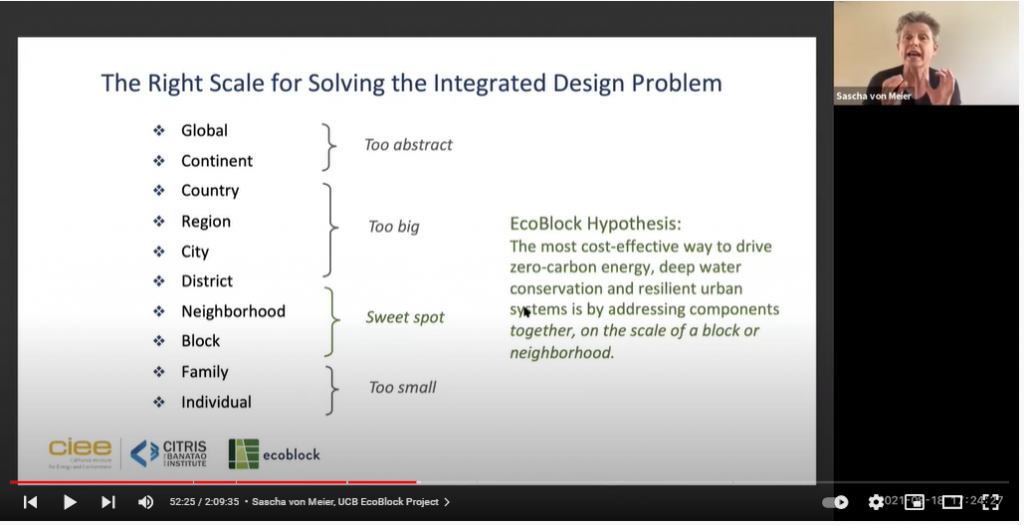 Placemaking in Portland and beyond

Mark Lakeman, of Communitecture and the City Repair Project in Portland, Oregon, relayed his experiences in placemaking to counteract designed isolation in American neighborhoods. “Our culture is predicated on leaving where we live to go elsewhere to earn a livelihood. One of the things we’re trying to engender is a localization effect to retrofit streets and neighborhoods.” Mark’s work has resulted in prototype communities in more than 100 cities, all focused on repurposing public spaces and effecting broadscale “re-villaging.”

“To address climate change, obviously we need ecological innovation. … we need to reduce carbon but we also need a culture that is excited!” One of Mark’s early efforts resulted in the establishment of the Little Free Library movement 13 years later. He acknowledged the influence of Kevin Lynch and his work “The Image of the City.”

Mark also told the story of Dignity Village (https://dignityvillage.org/) a radical experiment to end homelessness in NE Portland providing shelter for 60 people a night. The village is democratically self-governed with a mission of community and self-empowerment. 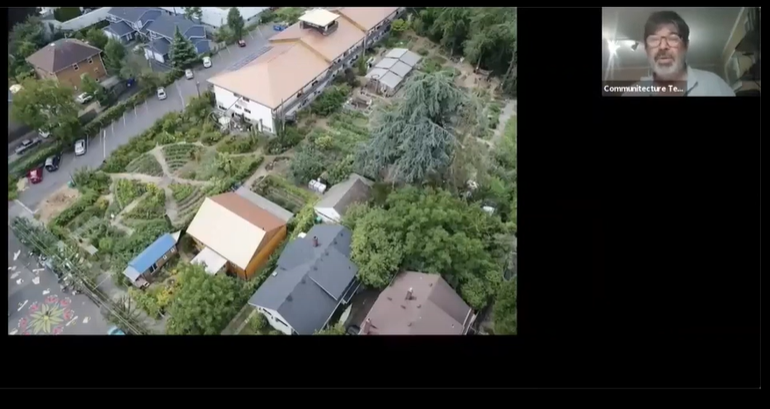 Neighborhood panelist Cathy Forkas described the diverse residence types and small businesses that Old East Davis enjoys (the neighborhood association was established in the 1980s) and reported that the Mark Rivera street mural will be re-painted this year. Her take-away from presentations was to think bigger and bring in more people (neighbors), to be more inclusive, more beautiful, and provide easy to access information to residents.

Emily Griswold of the Davis Manor Neighborhood Council, operating for about 20 years now, found inspiration in the talks especially around breaking down social isolation, strengthening culture and ecological resilience at the same time, and looking at big picture funding as well as the little things. Before COVID, Emily’s neighborhood held monthly happiness hours.

Elizabeth Lasensky reported that RanchoYolo senior mobile home park community is already designed with a social centers and small paths, but due to the fact that mobile home owners do not own the land their homes occupy, the community faces unique problems. Also unfortunate is the inability of mobile homes and carports to host solar panels; on the bright side, the community has just finished a solar panel installation on a few community structures. 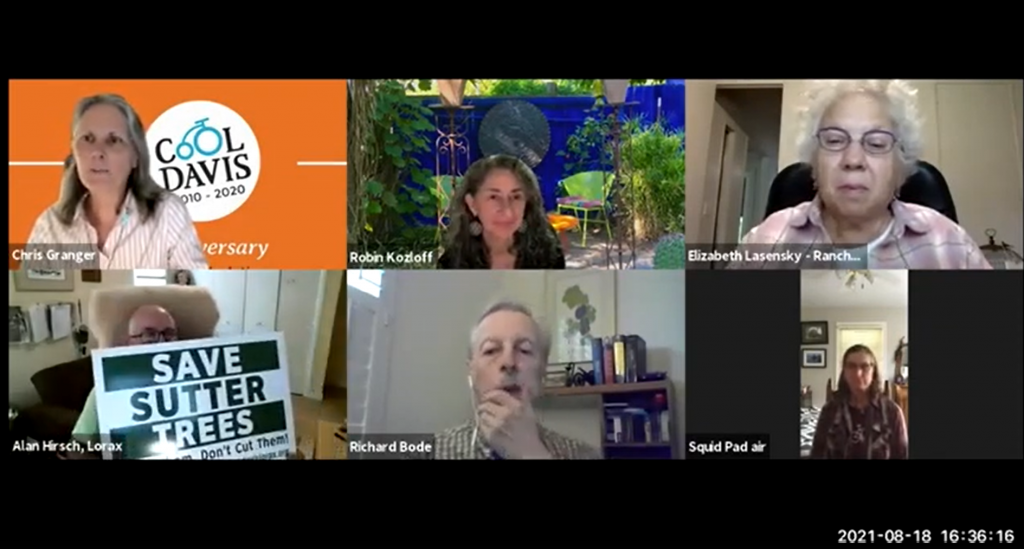