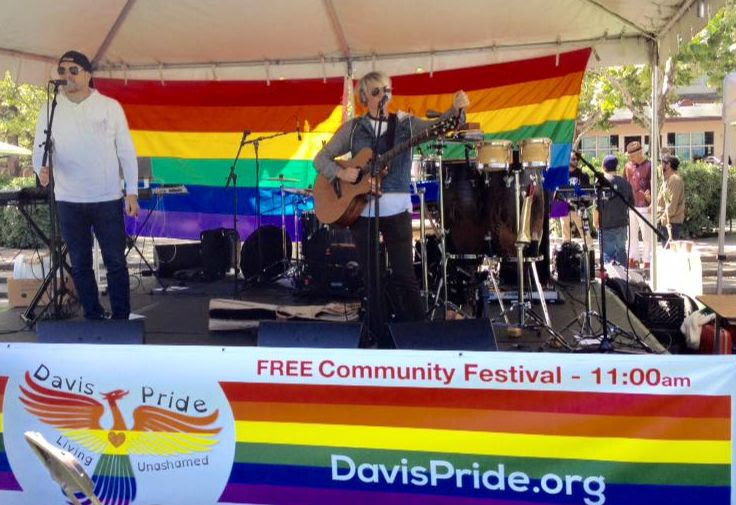 Rainbow crosswalks, live music, drag queens, and skating are all on the calendar as Davis celebrates June is Pride Month and the Davis Pride Festival set for Sunday, June 13, in Central Park, 401 C St., Davis. Several activities lead up to and follow that celebration:

On Thursday, May 27, Davis Phoenix Coalition representatives will speak at the virtual Davis Chamber of Commerce meeting. The presentation will offer practical tips on how businesses can be welcoming to LGBTQ+ individuals. Participants will receive a rainbow poster to hang in store windows that show their support of Pride Month.

The popular rainbow crosswalks will be painted around Central Park on Sunday, May 30. Volunteers will begin spraying the temporary chalk paint at 6 a.m., and continue until about 11 a.m. To volunteer, go to http://bit.ly/rainbowcrosswalks. Meanwhile, the city will hang Davis Pride rainbow banners throughout town, on display throughout June.

Business owners are asked to show their support by hanging a rainbow flag poster in their window. Posters are free, and available by emailing admin@davisphoenixco.org.

A Rainbow Skate Party is set for 7 to 9 p.m. on Saturday, June 12 in Central Park. Inline and roller-skating participants are welcome to roll in an area that will fenced off under the Farmers Market pavilion.
Davis Pride teams up with the Davis Craft and Vintage Market for the Davis Pride Festival on Sunday, June 13. The festival will have entertainment from 11 a.m. to 4 p.m., including live bands and a drag queen revue. The craft market, traditionally on the first Sunday of the month, is returning for a second fair in June. Health guidelines require participants to have tickets and assigned seating to attend the show. Tickets are free, with donations accepted.

On Friday, June 25, rainbows will light up the monthly Bike Party Davis ride. Participants will gather at 7 p.m. at the north end of Central Park. The ride will go from 7 to 8 p.m. on an easy, 8-mile loop through town.
June is National Pride Month. Davis festivities are traditionally celebrated in May, when UC Davis students are still in school. With most Aggies doing online learning, this year’s celebration is in June. The 2020 event was virtual.

Davis Pride is produced by the Davis Phoenix Coalition, a nonprofit that works to foster diversity, eliminate intolerance, prevent hate-motivated violence and support LGBTQ+ youths. The coalition was founded in the aftermath of a 2013 anti-gay attack on Davis resident “Mikey” Partida. Proceeds from Davis Pride support the coalition’s anti-racism and anti-bullying campaigns, support to LGBTQ+ youths and their families, and outreach with area police departments, churches and schools. To donate, go to https://davisphoenixco.org/donate.

Davis Pride will honor Ellen Pontac with a dance party at our June 13 festival – and you are invited. Ellen’s wife, Shelly Bailes, will be there too, saying it’s “an honor to be recognized and remembered by the Pride Committee.” Pontac died on March 15, 2020, away after a long illness. Shelly was at her side at their Davis home. Ellen and Shelly met in 1973, just four years after the Stonewall riots. In 1986, the pair was instrumental in the city of Davis becoming one of the first municipalities in the country to prohibit discrimination based on sexual orientation. In 2000, Pontac and Bailes became marriage-equality activists. Together with other activists, they lobbied tirelessly and put a human face on the movement.  No one was more committed, resilient, and visible in this fight.