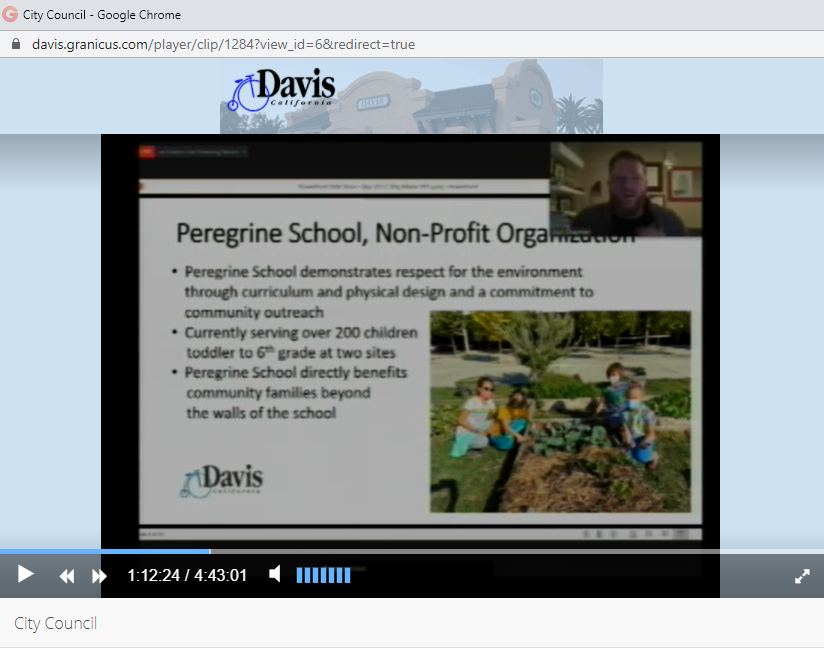 Editor’s note: This year’s Environmental Recognition Awards were presented and accepted at the April 20, 2021, Davis City Council meeting, conducted remotely for the second year in a row. The hope is for an in-person presentation of both this year and last year’s recipents in the future. Below is a summary of the winners and other resources, followed by the text of the staff report submitted by Kerry Daane Loux and Assistant City Manager, Ashley Feeney, to the City Council of the nominations from the Natural Resources Comission (NRC).

And the winners are …

View the City Council staff report (PDF) with information about the 2021 award recipients.
Peruse the staff presentation from April 20, 2021.
Visit the City of Davis website for a full listing of all recepients starting as early as 1995
Watch the City Council meeting video starting at timestamp 6:45 for the Earth Day proclamation and the awards presentation. Visit the page with all council meeting videos and select the April 20, 2021 video.
Watch the YouTube video of St. Martin’s Cool Congregation presentation by Gerry Braun.

Started by the NRC in 1995 and now in the 27th consecutive year, the City of Davis annually conducts the Environmental Recognition Awards (ERA) program to encourage and recognize efforts in the community that benefit environmental and overall sustainability objectives. The three standard nomination categories include businesses; non-profit organizations; and individuals/groups, each requiring residency or work completed in Davis.

An honorary category was added in 2017 to celebrate the City of Davis Centennial. The Environmental Legacy Award is intended to recognize events, programs or milestones that have made a significant difference in Davis’ environmental quality of life over the course of our 100+ year history. Awardees in this category are decided at the discretion of the NRC and City Council, often on a milestone anniversary of the awarded program. Four previous Legacy Awards have been dedicated to the City of Davis Recycling Program in 2020, marking its 50th anniversary last April; to the community engagement and activism that supported Central Park expansion in 2019; to Unitrans in 2018, recognizing its 50th anniversary; and in 2017, to Davis bike lanes, celebrating the 50th anniversary of the first bike lane installation in the nation.

The ERA applications received for this year’s program were electronically conveyed by staff to the NRC ERA subcommittee members, who met remotely on March 22, 2021 to discuss and recommend the proposed awardees, which were then approved by the full NRC at the March 2021 meeting.

The following are the NRC recommendations (and winners!) to the Davis City Council for the 2021 Environmental Recognition Award recipients.

West Yost was founded and is headquartered in Davis. This consulting firm has worked together with the City of Davis as a trusted advisor over the past 30 years to help the City reach its environmental goals related to many projects, including safe and sustainable water, wastewater and drainage services.

West Yost was selected for this award not only because of consulting projects they have undertaken in Davis to improve the environment, but also because their work in the community demonstrates a deep commitment to sustainability and stewardship values through their own operations and workplace culture. The business has focused on reducing water consumption, avoiding the use of plastic and paper, and encouraging employees to bike to work or work remotely, as well as to participate in community volunteerism. West Yost Associates also provides in-kind donations to local non-profits and community groups, such as use of their meeting spaces.

Two non-profit ERAs are recommended, due to the work promoting sustainability and environmental awareness well beyond their own organization.

Nominated by Deborah Bruns of Yolo County Office of Education

Peregrine School describes itself as ‘a private school in the public interest’, currently serving over 200 children toddler age through 6th grade at two sites. Respect for the environment is an organizing principle, demonstrated through both the school’s curriculum and physical design, and evidenced by a commitment to community outreach.

Students received a US Fish & Wildlife Schoolyard Habitats Program grant to transform a soccer field into a native plant learning garden, and a Whole Kids Foundation grant to develop a “pioneer garden” to teach California agriculture and grow farmers’ market crops. Peregrine offers an annual Girls in Science event, with up to 30 women scientists doing hands-on activities in support of science and environmental awareness, encouraging girls (and boys) to pursue careers in science. Programs such as these have inspired a new generation of skilled and experienced environmental stewards with an environmental focus directly benefiting community families beyond the walls of the school.

St. Martin’s Church is an outstanding leader demonstrating environmental action that improves the lives of the congregation and inspires the Davis community. The church has a long history of action on environmental stewardship, with notable efforts in 2020 to move toward zero carbon emission for the entire campus. The physical design improvements have included electrifying heating and water systems, reducing waste, and encouraging active transportation. Additionally, the Care for God’s Creation Committee, established in 2011, coordinates sustainability efforts and outreach. The church has provided information and support for these efforts by sponsoring invited speakers on subjects such as environmental justice and climate action and partnering with groups including Davis Community Meals & Housing, Yolo Interfaith Alliance for Climate Justice, Cool Davis and others.

Dave Pelz served City of Davis over a productive 35-year career, from 1964 to his retirement in 1999, the last 27 years as Public Works Director. Many of Davis’ environmental accomplishments occurred through his initiative, support and facilitation. Further, he took this message to the state, initiating many transportation reforms and setting Davis as a model for California. He represented the League of California Cities on the Caltrans Bicycle Advisory Committee, was a steadfast advocate for bicycle and bus transportation and a loyal supporter of the public works profession as a 1965 charter member of the Sacramento Chapter of the American Public Works Association. This award is being given posthumously, as Dave passed away last March.

His contributions to the City’s environmental progress were exceptional and multifaceted, including participating in or leading development of bike lanes, paths, under- and overpasses and regionally connected bikeways; establishment of the city-wide bus service, Unitrans; and working with Davis Waste Removal to create one of the first recycling programs in the nation in 1970. Notably, Dave developed and implemented an innovative bike-only traffic signal that was adopted statewide. Also, Dave was involved with ground-breaking design of the Davis water treatment facility, relying on natural pondage and using little energy for the secondary treatment step as a result. Overall, Dave had a hand in many of Davis’ state-of-the-art and original legacy projects.

Recommended by the NRC

Village Homes, a seventy-acre subdivision started in 1975 and located in West Davis, is in many ways the first of its kind in California, and was far ahead of its time. It is internationally recognized for its planned sustainability and ecologically beneficial features, and has been visited by luminaries such as former French President Francois Mitterand and First Lady Rosalyn Carter.  It was designed to encourage both the development of a sense of community and the conservation of energy and natural resources by principal developers Mike Corbett and Judy Corbett. Construction in the neighborhood involved many different architects and contractors over a number of years. Now completed, the development includes 225 homes and 20 apartment units.

“The defining impression of the neighborhood is how the homes and streets recede into the lush landscape and greenbelts: a non-manicured landscape dominated by common areas,” once said former City Planner Robert Wolcott. Along the eastern edge of the project, two rows of almond trees line Arlington Boulevard, part of an effort to integrate small-scale agriculture into the project. Narrow streets meander east to west, allowing clustered houses to maintain a north-south orientation designed for natural heating and cooling. An extensive system of paths for pedestrians and bicyclists runs throughout, linking up in each direction with other city pathways adjacent to the project, with bridges over small stream beds ready to handle rain water, in lieu of a storm drain system. The streams virtually eliminate the need for underground pipes, allowing percolation of storm water into the ground.