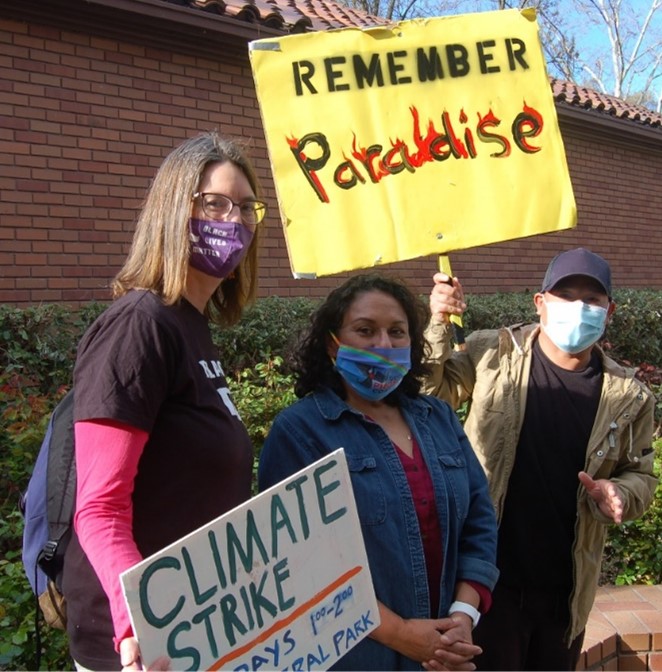 Editor’s Note: The Blue Devil Hub from Davis High School recorded parts of the walk and interviewed the organizers of the event. Watch their video here. http://www.bluedevilhub.com/2021/03/14/walk-for-climate-justice/. DMA also recorded the walk. An 11-minute program is now airing on DCTV Channel 15 Comcast in Davis, at Menu 99 on AT&T’s U-verse system, and is also available on demand at DMA’s YouTube Channel https://youtu.be/HyJv3wxl3u0. Thanks to Production Specialist Bryce Parker for his work this past year covering many marches and vigils, as well as other community events.

On the crisp, sunny afternoon of March 11, 2021, a handful of youth and a dozen adults took up the international challenge from a national interfaith organization, Greenfaith, to walk for the “Sacred People, Sacred Earth Day of Climate Action” and was part of climate action events held on six continents. The local walk involved visits to key decision makers in Davis to assess their progress in terms of climate action since the historic Climate Strike in September 2019 when almost a thousand mainly young people marched to Central Park via City Hall and the School District offices. The youth intended to grade the local officials on whether their actions match the scale of the climate crisis.

The group gathered at the 5th and B Street corner of Central Park, where young people and families have held a weekly strike for more than 18 months. They waved signs promoting a GREEN NEW DEAL, eager for conversation with public offices. Sixth grader Sumaya Buxton opened with a statement acknowledging the resilient presence/sovereignty of the Wintun people who have been ancestral stewards of this land since time immemorial.

Wearing masks and observing social distancing, the group walked to the first stop outside the offices of the Davis School District to receive a “progress report” on their efforts to embrace sustainability.

Superintendent John A. Bowes and Trustee President Joe DiNunzio shared that the district receives their grid power energy through Valley Clean Energy (VCE) (which is 75% carbon free and 45% renewable compared to PG&E’s 29% renewable portfolio). The district is committed to sourcing 80% of its energy from renewable sources, as soon as possible, and looks forward to installing solar panels over more parking lots and blacktop. Davis Senior High School, Harper Junior High School, and Korematsu Elementary School already receive a portion of their electricity from solar arrays located at the school sites operated via a Power Purchase Agreement with Tesla. Bowes also shared that changing all the lighting to LED bulbs, thanks to state funding, had already reduced their single biggest energy cost significantly!

In terms of natural gas service, more needs to be done, but it is now district practice to install non gas-fired appliances such as HVAC units and kitchen equipment. The new Multi-Purpose Room projects, the DSHS STEM building, and the Da Vinci High School Tech Hub project will not have any gas-fired HVAC units or kitchen equipment.

Sumaya presented a list of demands that had been put together by youth climate marches in 2019, highlighting a few related to food, waste, and bikes. DiNunzio was excited about improvements at most schools in recycling, as well as the increased provision of non-meat options in school meals.

Juliette Beck, one of the adult walkers, urged the Superintendent to make the most of the pandemic context to promote more instruction out-of-doors, that can include growing vegetables and fruits as well as learning more about the native indigenous ecological traditions of our region, led by the Patwin Wintun people. She left Bowes and DiNunzio a copy of a Green Schoolyards letter signed by 150 parents to suggest the school campuses should be “living” places where students can learn about growing food and climate change.

Next, the group headed across the street to meet with Mayor Gloria Partida for a check up on City of Davis climate actions. The city is currently planning a process to update the Climate Action and Adaptation Plan (CAAP) adopted in 2010 . The group urged the city to ensure that equity is at the forefront of the plan, learning from the success of the UC Davis Healthy Davis Together program, which drew in people of diverse backgrounds, ages and languages, including outreach that was bilingual and prioritizing frontline communities such as farm workers. Community organizer and founder of Multiculturalism Rocks, NJ Mvondo said, “Systemic racism is also at the heart of the climate crisis” and urged for each of the city’s commissions to include the voices of native people and people of color in developing climate solutions.” According to Mayor Gloria Partida, “that’s the kind of involvement Davis seeks on all their committees and projects for the CAAP.”

Long-time Davis resident Americo Meza came forward to propose that an undeveloped area of the Cannery be dedicated to a cultural center and garden honoring Native Wintun history and land stewardship practices. Space would also be created for other wisdom cultures. Mayor Partida expressed her support for a vision going forward including our youth and other voices not often heard reflecting these concerns for climate and social justice.

Another issue raised was regulating wood burning fireplaces that can be more polluting than the burning of natural gas. The mayor said, “Many counties have stronger regulations than Davis, but it’s hard to police.” We need a cultural shift backed up by regulation such as no new construction with fireplaces, and promoting the Air Quality Management District rebate program for woodburning stoves.

At the U.S. Department of Agriculture (USDA) on the corner of 5th and G Street, the group met Carlos Suarez, State Conservationist for USDA’s Natural Resources Conservation Service in California. Originally from Puerto Rico, Suarez has served in many states including Indiana, Nebraska, Pennsylvania, West Virginia, Wisconsin, as well as Mexico and Nicaragua. Currently, he leads the Agency’s 350 employees in 55 offices across California from the state headquarters in Davis.

Suarez addresses climate change and climate smart agriculture, with a focus on helping farmers protect their natural resources, from healthy soil to sequestering CO2 in the soil. His programs provide one-on-one conservation technical and planning assistance to thousands of farmers and ranchers on voluntary projects that conserve and protect the natural resources on farms, ranches, and private non-industrial forests.

Suarez’s office recently completed a 2004-2019 study on how much CO2 is sequestered in the soil. Suarez reported, “California farms reduce CO2 equal to removing 79,000 vehicles from the roads for one year. Resilient soils also help protect against drought. So, 39,000 CA farmers composting and cover cropping helps air quality, which is now beginning to improve. Healthy soils also protect ground water and wildlife, and such soils build wildlife habitat in pollinator and hedge rows. Such farming techniques build overall resiliency and sustainability. This is critical now that our fire season is year-round.” USDA often has financial assistance for farmers that is crucial for their survival. Our farm workers were harmed the most in the fires as they kept harvesting in the smoke without protection. Suarez added, “We have to reduce emissions 8% annually immediately, including emissions from farming equipment.”

Suarez will also oversee significant conservation funding administered by the Agency through Farm Bill conservation programs. Under the (recently extended) 2008 Farm Bill, these resources increased significantly, and in 2012 they totaled approximately $154.2 million in cost share, stewardship, and easement payments in California. In recent years, the top investments have been made to help California’s farmers and ranchers enhance the following: air quality; irrigation efficiency; ground and surface water quality on dairies; rangeland health through fencing and brush management; fish and wildlife habitat; and forest health and fire resilience. The USDA is an important agency to follow closely.

The climate walk was also scheduled to meet with County Supervisor Don Saylor, but the group engaged so enthusiastically with the first two visits that they missed the chance to talk with Don Saylor. However, Saylor expressed his wish to schedule another meeting with youth knowing the exchange will offer benefits, including chances to learn how climate emergency work is going and a chance to inform the youth as they “grade” those efforts.

Robin Datel, who arranged the conversations with public officials, also inquired at the offices of Assembly member Cecilia Aguiar-Curry and Congressman John Garamendi, but neither of their offices are holding in-person meetings currently. Datel is planning to accept the offer from Aguiar-Curry’s office to have a Zoom meeting soon.

Climate Strike Davis, including Datel and Beck, organized the Davis Climate Justice Walk in response to the worldwide call to action by Greenfaith. A powerful day of action unfolded worldwide on March 11. Grassroots people of faith took to the streets to call for equitable and bold climate commitments by governments and financial institutions. In 45 countries, with over 420 events, people sounded the alarm for climate justice together as one global, grassroots, multi-faith community. Many people and institutions divested from fossil fuels.

The Climate Justice Walk group plans to reconvene soon to discuss what they learned and assign progress grades for each agency visited to be announced on Earth Day, April 22, 2021. In the meantime, readers can pay attention to what these civic organizations do, continue to educate themselves, and think about ways to encourage more climate actions by every organization, household, and individual in our community.

Lynne Nittler is a local activist and lifelong environmentalist. She was a founding member of Cool Davis and served as the board Secretary for eight years. She continues as a contributing writer and active collaborator in her role with the Yolo Interfaith Alliance for Climate Justice, a Cool Davis working group which sponsors many community climate events. She played a significant role in stopping twice-daily, 100-car trains of explosive tar sands oil from Canada coming through Nor. CA to the Bay Area refineries in 2014-16, regularly organizes and/or attends protests at the capitol and in town, sings with the Davis Raging Grannies, organized eight Interfaith Climate Summits and innumerable evening speakers, films, concerts, reading and discussion groups, assisted youth in the 2019 Youth Climate Strike, and is currently active with Fossil Free California urging the divestment of CalSTRS and CalPERS pension funds  from fossil fuels, among her many passionate efforts to stem the tide of climate change.