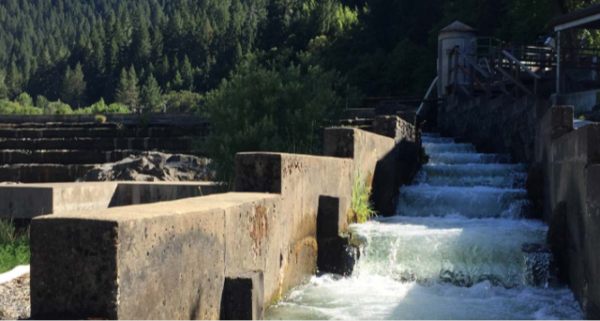 For many years PG&E has operated the “Potter Valley Project,” a hydroelectric facility on the main stem of the Eel River consisting of Scott and Cape Horn dams and a tunnel diverting water into the Russian River watershed, where it is used to generate a small amount of electricity and for irrigation by farmers in Potter Valley and farther south in Sonoma County.

As with all other substantial hydroelectric generating systems, the Potter Valley Project requires periodic relicensing from the Federal Energy Regulatory Commission. PG&E initiated the relicensing process in 2017, but withdrew its application early in 2019, stating that this operation has been a consistent money-loser for years and its fiscal prospects could only get worse given declining energy markets. Current law requiring relicensing to include provisions for fish passage costing nearly $100 million dollars made the financial picture even less tenable. PG&E’s current license will expire on April 14, 2022, presenting significant risks, liabilities, and uncertainty to local communities and the environment.

In response, Rep. Jared Huffman, D-San Rafael, called together a diverse group of environmental organizations, water agencies, local governments and tribes and formed an “Ad Hoc Committee” to explore options for the future operation of the project. The Scott Dam on the main stem of the Eel river
holds water for the Lake Pillsbury reservoir.

From the Ad Hoc Committee, a working group composed of California Trout, Humboldt County, the Mendocino County Inland Water and Power Commission, the Sonoma County Water Agency and the Round Valley Indian Tribes developed a plan they called the Two-Basin Solution Partnership. This proposal would reopen the main stem of the Eel River to spawning runs of salmon and steelhead by removing Scott Dam, while maintaining electric generation and water deliveries to Mendocino and Sonoma counties. Lake Pillsbury would disappear.

In 2019 the Two-Basin Solution Partnership filed a Notice of Intent to apply for relicensing and ownership of the project, followed in the spring of 2020 by a feasibility study and project plan that includes removal of Scott Dam, and a commitment to provide water to Potter Valley and the Russian River. Water exports would take place during high winter flows rather than in the summer as they do presently and would be stored in Lake Mendocino. Project objectives include improved conditions for native fish, maintenance of reliable water supply, respect for tribal rights, and minimization of impacts to Lake County, which is the location of Scott Dam, Lake Pillsbury, and many miles of prime spawning habitat on the upper reaches of the Eel River.

Many questions remain, starting with impacts on local recreational users and cabin owners. What would replace the lake’s function as a firefighting resource? What would be the effects on surrounding wildlife such as the resident herd of tule elk? Are mitigations to Lake County sufficient and reasonable? Can alternative recreational uses such as fishing and mountain biking be developed? Are downstream flows sufficient to support spawning migrations this far upstream? Will the disposal of mercury-laden sediments in the reservoir be a problem? All these and many more questions will be addressed in detailed studies required to support a final relicensing application. Besides addressing complex environmental issues, these studies would include an economic analysis designed to narrow down cost estimates, which vary wildly from little more than $100 million to more than $500 million.

Beneficiaries of the Two-Basin Solution obviously include the fish: according to esteemed ichthyologist Peter Moyle, more than 99 percent of available spawning habitat upstream of Soda Creek in the upper mainstem Eel River is blocked by Scott Dam, including Gravelly Valley, “some of the best historical spawning habitat in the drainage.” Beneficiaries also include the water users. Without relicensing, FERC would have to initiate a “decommissioning” process that probably would result in the removal of both Scott and Cape Horn dams, restoration of historic flows to the Eel, and cessation of water exports to the Russian River watershed.

Seeing themselves on the losing end in either scenario are the Lake Pillsbury cabin owners and lessees, who would lose the reservoir-oriented recreation that presumably drew them to the area in the first place. Dam removal would likely entail a number of years of disruptive construction and restoration work in the reservoir footprint and the probable (though perhaps temporary) diminution of their property values. In response, they have formed a “Lake Pillsbury Alliance” which advocates for the retention of the reservoir and development of alternative ways to provide fish passage.

Apparently, at the request of the Alliance, Rep. John Garamendi, D-Walnut Grove, whose district includes northern Lake County, has submitted formal comments to FERC announcing his categorical opposition to the removal of Scott Dam and demanding that Lake County be given a “full and equal seat at the table” by inclusion in the Two Basin Working Group, not just the Ad Hoc Committee which has had representation from the Lake County Board of Supervisors all along.

Although Rep. Garamendi is to be commended for defending the interests of Lake Pillsbury property owners, even though very few are Lake County residents or his constituents, it is most unlikely that anything — including his involvement — will ultimately lead to the retention of the reservoir given the high costs of maintaining the Project in its current form. Since the deadline for any relicensing application has passed, the only options FERC has are relicensing to the Two-Basin Solution Partnership or decommissioning the facility altogether. FERC can’t compel the Partnership to pivot to a dam-retention-plus-fish-ladders outcome or consider that outcome at all without a willing and well-funded entity to assume responsibility for massive construction costs and liabilities including ongoing dam maintenance. Since no such willing entity exists, for the Congressman to use his influence to help the county negotiate meaningful mitigations would probably be a more fruitful approach than categorical opposition.

In the meantime, the clock is ticking for the salmon and steelhead. Every year that a solution is postponed increases the likelihood of extinction.

That said, despite everything I remain cautiously optimistic that benefits to the watershed and its endangered fish species can be realized, benefits similar to those already seen on the Elwa River in Washington state and anticipated on the Klamath in far northern California.

— Victoria Brandon is the president of Tuleyome’s board of directors and she has lived in Lake County, exploring the local scene and hiking the local trails, since 1981. As well as the Tuleyome Board, she also serves on the board of the Lake County Resource Conservation District and Lake County LAFCo. State Senator Pat Wiggins named her Senate District 2 Woman of the Year in 2008. Tuleyome is a nonprofit conservation organization based in Woodland. For more information go to www.tuleyome.org.