Home > Local Business > Could You Be Induced to Switch to an Induction Cooktop? 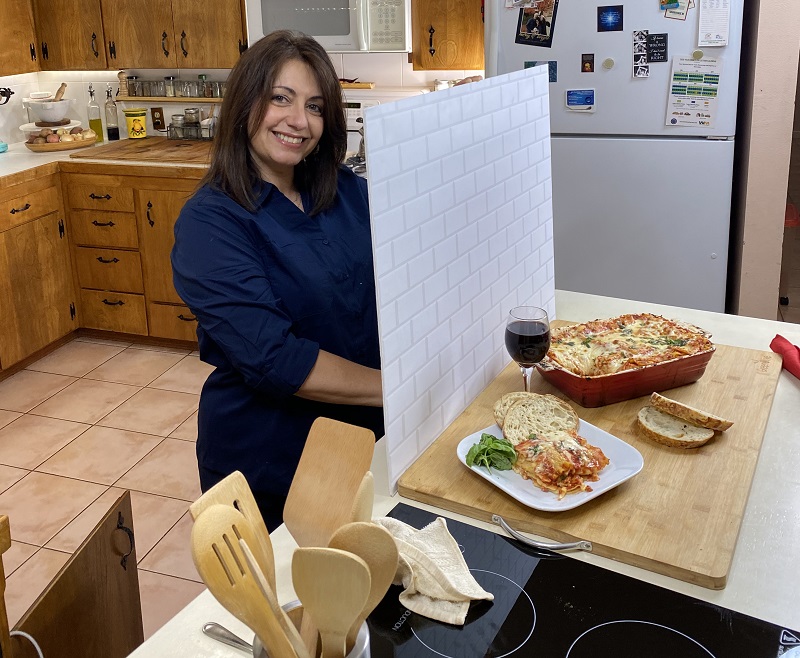 Could You Be Induced to Switch to an Induction Cooktop?

We’ve all heard you can start a fire by rubbing two sticks together. Easier said than done, but the idea has enshrined in popular culture the physical property that friction between two objects creates heat. Lesser known, but important nonetheless, is the idea that you can cook food with the heat generated by friction between electrons and atoms in your cooking pots. Enter induction cooktops, which have been popular in Europe and Asia for several years but are just now catching on in this country.

Induction cooktops offer many benefits in addition to seeming a bit miraculous. They heat cooking pots and pans faster and allow them to cool off quicker than any other type of stove. Induction cooktops offer precise heat control — even at low levels — are extremely energy efficient, and do not increase harmful indoor pollutants the way a gas stove can. Unfortunately, aluminum and copper-bottomed cookware won’t work with the induction method, but steel-bottomed or cast-iron pots and pans do work well and can last a lifetime.

First a little terminology: A stove is a cooking surface that uses direct heat to cook food, usually either powered by natural gas or an electric element. A range is a kitchen appliance that combines both a stove and an oven into a single unit. An oven, as we all know well, especially this time of year, is an enclosed cooking compartment, again commonly powered by either natural gas or electrical elements.

“Cooktop” is another word for stove.

So, to return to our story, induction cooktops pass a rapidly alternating electric current through a copper coil beneath the cooking surface, which “induces” an electrical current, thus moving electrons. Those moving electrons, rubbing against each other in the atoms in the pot, create heat. What appears like magic – your food, cooking right along — is a simple fascination of physics.

From a cook’s perspective, one big advantage of induction cooktops is that the desired cooking temperature — both higher and lower — is achieved rather quickly, faster than with a gas stove.

There are also many health and safety benefits that bear consideration. For starters, when pans are removed from an induction cooktop surface, the unit automatically turns that “burner” off, resulting in fewer accidents, less wasted energy, and no more gas emergencies.

From an environmental perspective, the benefits of using only electricity over burning fossil fuels comes to the fore. The creation of greenhouse gases inherent in the production and burning of fossil fuels is reduced, and the negative health impacts of cooking over a flame disappear. More on that below, but first, a few personal experiences.

JD Trebec lives in one of the quiet “classic” neighborhoods of Woodland. About 18 months ago, JD had to buy a new cooking appliance. He wanted to move from gas to electric but wasn’t happy about the idea of a standard electric stove. In doing a bit of research, he came across induction cooktops and is delighted he did. “It’s amazing. There’s really tight control over the heat. I can put it in ‘overdrive’ and boil water in less than a minute. I can also get consistent low heat. There’s no open flame, so it’s safer. When you shut it off, it’s off. It’s great.”

JD had always used steel and cast-iron pans, all of which work fine with his induction cooktop. He did have to run a new 220V electrical line, but he feels the cost was reasonable considering the benefit of switching to a better way to cook. Also, he got a great deal; $800 on sale locally, proving that one of the negatives often raised about induction stoves — the cost — does not need to be a barrier.

Lucia Oliverio, also a Woodland resident, hosts a cooking channel on YouTube from her home. Lucia admits she has “always been a fan of gas stoves,” but “when I started making cooking videos for my YouTube channel, I needed more of a welcoming stove where I could talk to my guests while I was cooking and facing the camera.”

Lucia looks forward to integrating induction cooktops into her home cooking experience, too. “When I get the opportunity to remodel my kitchen, I will be looking to upgrade to an induction cooktop for my main method of cooking. I like the way it’s clean looking, no bulky looking counters, no smell of gas, and cleaner for the environment.” You can find Lucia cooking on her induction cooktop on YouTube at GreenOlive Cooking Channel.

My wife and I remodeled our kitchen a few years ago. Susan, my wife, did a little research and was convinced that we should switch to an induction cooktop. So, the old electric stove was shown the door and a new slide-in induction cooktop moved in. We are both very happy with it and both second the benefits JD Trebec lists.

In addition, the clean-up crew, me, really appreciates the fact that it makes cleaning a snap. The surface is flat glass, so it’s easier to clean than even a smooth-top electric cooktop. Since the surface doesn’t heat up directly, spills don’t burn on.

Carol and Richard Bourne of Davis switched from gas to induction several years ago and are enthusiastic converts. Dick said, “When we made the commitment to all-electric for our multi-plex, many in our group of four couples were apprehensive about the change. Thankfully, we have all found induction to be faster, more controllable, and much cleaner than gas. I frankly hated the task of cleaning a gas cooktop and am thrilled with the ease of wiping off the smooth glass of our induction unit.”

Dick also offered a little advice: “We saw some induction units with complex and unintuitive controls; the burner locations were not easily visible. Carol and I recommend choosing an induction cooktop with readily visible features and simple controls.”

Induction vs. the rest: Induction wins the efficiency race

About 90 percent of the electricity consumed by an induction cooktop goes directly toward heating food, largely because they generate heat directly within the pan itself. By comparison, only 65 to 70 percent of the electricity used by electric stoves actually heats the food. Gas stoves are even less efficient with only 35 to 40 percent of the heat energy actually being transmitted through the pan to the food. Another big advantage of the more efficient induction cooktops is that they do not heat up the kitchen as much as the other methods.

Other cooking appliances can also cut down on cost and energy consumption. A microwave is one of the cheapest and most energy-efficient cooking appliances around, using less power than electric stoves. A toaster oven is a good alternative to a full-sized electric oven for baking small dishes. Finally, some induction cooktops are paired with standard electric ovens, but you can pair yours with more efficient types, such as convection ovens, which use fans to distribute heat more evenly, reducing cooking times and the need to open the oven door and rotate food.

Environmental and health benefits of cooking with induction abound

Natural gas stoves release an array of pollutants including carbon monoxide, formaldehyde, nitrogen dioxide, and other harmful pollutants into the air. All can be toxic to people and pets. A recent review of several studies concluded that indoor air pollutants can often exceed levels that would be illegal if outside. With new houses being built with air-tight construction to increase heating and cooling efficiency, there’s greater potential for indoor air pollution.

The California Air Resources Board (ARB) recommends operating a high-volume exhaust fan at all times when using a gas stove. It also recommends installing side shields, which increase the effectiveness of the fan. According to the ARB, “Exposure to these [pollutants] can cause or worsen a wide range of health problems such as nose and throat irritation, headaches, fatigue and nausea. Young children, people with asthma and people with heart or lung disease are especially vulnerable to the harmful effects of indoor air pollution.” The ARB recommends that gas kitchen appliances be inspected yearly by a qualified technician to detect natural gas or carbon monoxide leaks.

Also, while most people know CO2 is a powerful greenhouse gas, they may not be aware that CO2 can also be an indoor pollutant. Normal outside CO2 concentrations range from 400-450 parts per million (ppm), but it’s quite possible for indoor concentrations to rise to 1,000 ppm or higher. At that level, occupants can begin to experience headaches, fatigue, foggy thinking, or other symptoms. While there are many reasons why indoor CO2 levels might rise, gas stoves are one contributing factor.

Some people are also simply concerned that their gas stove is contributing to CO2 emissions that contribute to climate change. Since electricity generated for both Valley Clean Energy and PG&E customers is high in renewables, switching to an induction cooktop means your cooking will emit far less CO2 to the environment. Every little bit helps.

There are a few possible downsides to switching to an induction cooktop that you should be aware of. One consideration is whether your current pots and pans will work with an induction stove. Aluminum and copper-bottomed will not. Stainless steel and cast-iron pots and pans work well. Keep in mind, the bottom of cookware must be flat. The normal roughness of cast iron is fine, but generally pots must be without pronounced ridges.

A big consideration for most people is cost. A single “zone” induction cooktop runs for as little as $80, while a two-zone cooktop is currently about $200. For larger appliances, prices rise quickly. Recent regular prices for induction cooktops combined with an oven at a nearby big box store ranged from $1500 to $2200. Standard electric ranges (combined stove and oven) are generally less expensive, although you can easily spend over $1000 for a good quality electric stove and oven unit combination.

If you’re in the market for a new cooktop, or your oven finally gives out, more efficient and healthful induction models, plus convection ovens, are definitely worth a look. Unlike gas stoves, induction cooktops produce no pollution in the home, they’re safer and better for the environment, and they’re cheaper than high-end gas models. Sometimes new ideas really are better.

While your holiday feast plans may be disrupted this year, perhaps having a full year to get used to a new induction cooktop will make next year’s meal all the sweeter and even more savory.