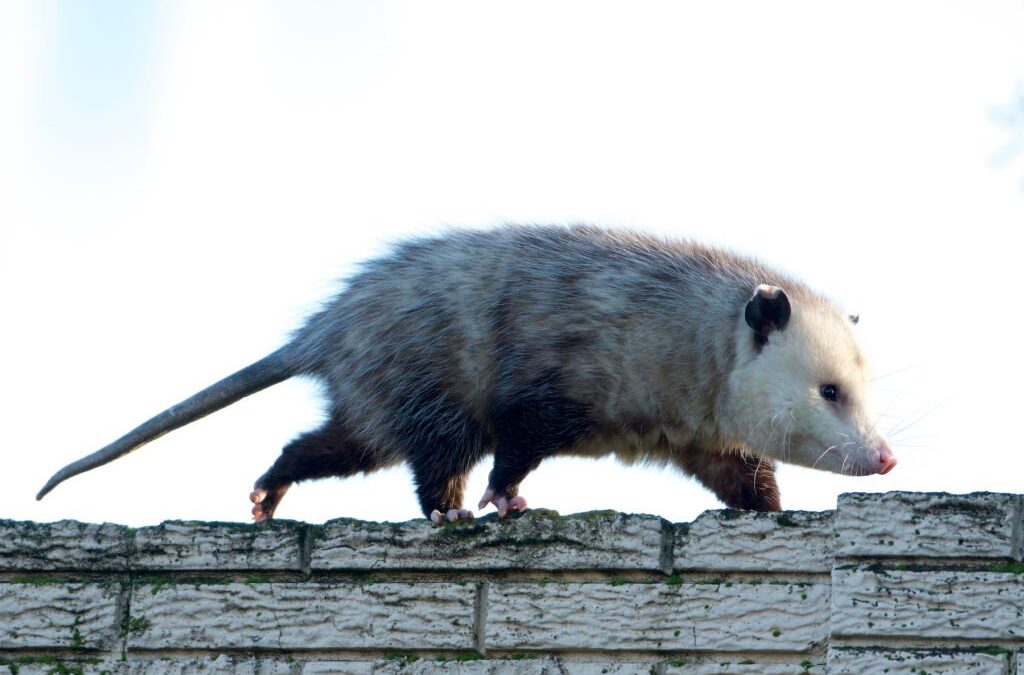 Have you ever looked out your window at night and seen a long pointy nose and two eerie green reflective eyes staring at you? Did your heart skip a beat? Did your dog go berzerk? Not to fear, it’s just North America’s only marsupial, the Virginia opossum (Didelphius virginiana).

Commonly just called opossum or “possum” for short, they are native to the southeastern United States. They were introduced into California in the late 1890s to early 1900s at three separate locations: one near Los Angeles, which expanded and soon colonized nearby Ventura County, one group intended for food near San Jose and one group near Visalia as an ill-fated fur farm.

Today, they can be found in most of the U.S. states east of the Rocky Mountains and along the Pacific Coast north to western Canada and south to Baja California, Mexico. Over time, they have successfully become part of California’s wildlife.

Opossums are about the size of a house cat with males, called Jacks, being slightly larger than females, called Jills.  In California, they are primarily gray with a white face, naked ears and tail but colors do vary throughout their range.

They are excellent climbers and fine swimmers, and using their tails and thumbs to grip and grab things. I suppose they might possibly be considered relatively eerie-looking, seeing as their long, narrow snout hides an impressive number of teeth. The delightful pink nose at the end of it makes up for the 50 choppers hiding inside.

Shy, primarily solitary and rather slow moving, they are active mainly from dawn to dusk but that can vary depending on the temperature. Additional nocturnal amenities include sensitive whiskers, keen eyesight and sharp, well-developed hearing.

Opossums don’t wander too far from water and can often be found in riparian habitats and other areas that provide cover and food such as nearby woodlands, brushy areas and agricultural properties.

Ever the opportunistic snacker, opossums thrive in residential areas, which is probably why you may have seen one or two bumbling about your yard. They eat rotting and fallen fruit (which helps you not have to clean up as much), food left out overnight for pets and bird food, and have zero qualms about rummaging through a trash or compost bin. Ranchers may find them undesirable though since they do consider chicken eggs worthy of at least a couple of Michelin Stars.

However, they do make up for their table manners by providing excellent neighborhood pest control by gobbling up things we find icky. Favorites include spiders, snails, cockroaches, crickets, ticks and mice.

Although they are not immune to it, their body temperature is too low to carry or transmit rabies. Due to lower body temperature, they also are resistant to viruses that we vaccinate our pets against, such as distemper, parvovirus and forms of feline hepatitis. And, they are remarkably immune to rattlesnake and other snake venom.

Mating usually occurs twice in the Golden State, once in January-February and again in June-July.  Although up to 25 joeys may be born, the number that survive ultimately depends on the number of teats the momma has (usually 13).

The young are born helpless, blind and hairless. About the size of a honey bee, they must climb into the mother’s pouch and latch on to one of her teats where they will remain for 50 to 60 days. Once they are grown enough to move out, they will leave the pouch but remain with mom for about four to six additional weeks, catching a ride on her back and learning important possum life skills.

Once they are independent and set out on their own, only about 50% of those will survive into adulthood. Most of them live only about two years in the wild; main predators include cats, dogs and owls, but most casualties are human-related such as vehicle strikes.

If cornered or threatened, the opossums’ first line of defense is showing off their impressive number of teeth. It’ll growl, hiss, excrete urine and/or feces and other stinky stuff and flee if able.  But, they’re generally slow.

And, if pressure really mounts for them, they will enter a catatonic state, fittingly called “playing possum.” They stare straight ahead or tightly shut their eyes. They can extend their tongues letting them flop out of their mouths, drool and dramatically slow their breathing. They can remain this way for minutes to several hours. Assuming they are dead, the predator often loses interest. Biologists have not yet determined if this is a voluntary or involuntary reaction.

Opossums have enormous beneficial and impressive qualities, and I think they’re actually quite charming. They’d much rather flight than fight, so if you see one in your neighborhood, give them a nod of gratitude for ridding your garden of snails.

— Kristie Ehrhardt is Tuleyome’s land conservation and stewardship program director. She received her bachelor’s degree in biology from California State University, Bakersfield. Before Tuleyome, she worked as a biologist up and down the Sacramento and San Joaquin Valleys for consulting firms and in the land conservation and mitigation banking industry. Tuleyome is a nonprofit conservation organization based in Woodland. For more information go to www.tuleyome.org.