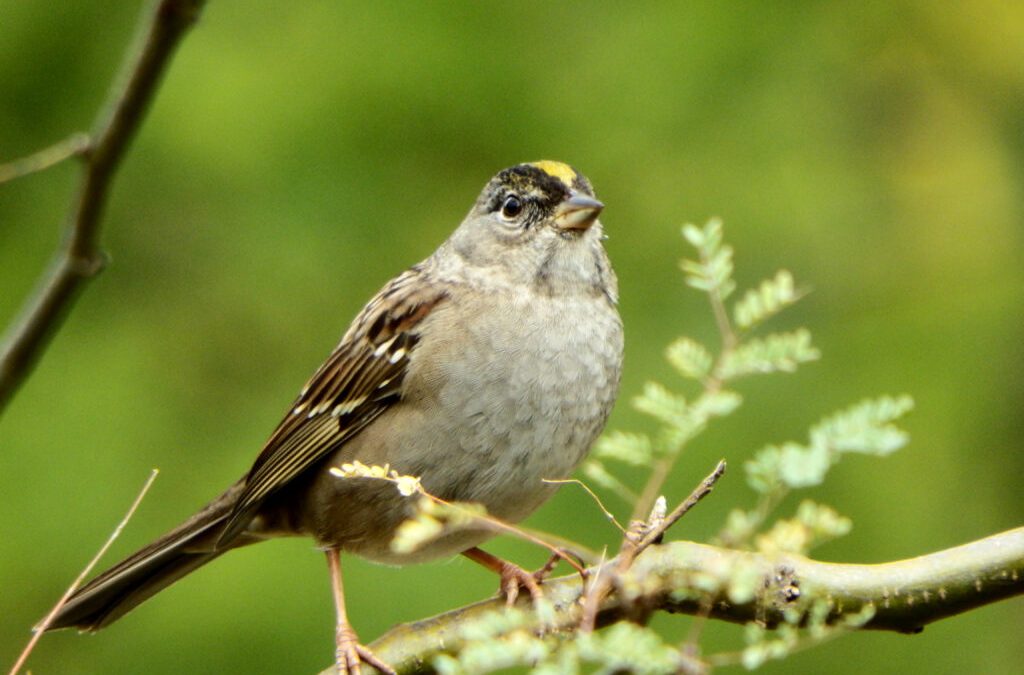 Along with the waterfowl migrating into and through the region now, we’re also seeing an influx of songbirds and sparrows that will winter here and then fly off toward their breeding grounds in the spring. Three of the easiest ones to spot are the golden-crowned sparrow, the white-crowned sparrow and the dark-eyed junco.

Some populations of these birds migrate great distances, stopping over in our part of the state to rest before they move on. The white-crowned sparrows (Zonotrichia leucophrys), for example, can travel more than 2,500 miles from Alaska to Southern California. Other species simply move up and down from one elevation to another.

There are five different subspecies of white-crowned sparrow, but the Zonotrichia leucophrys nuttalli is common to this area of California and often develops permanent residency along the coast.

Adult white-crowns are very easy to identify when you see them in the field. Their bright white-and-black-striped heads are unmistakable. The juveniles have similar markings, but those stripes are tinted a diluted tan and brown.

A fun fact about these birds is that the males learn their songs from the areas where they are born rather than from their parents. And because many of them stick close to their natal sites when they’re breeding, flocks of the birds develop regional “dialects.”

Golden-crowned sparrows (Zonotrichia atricapilla) are aptly named for the bright golden stripe found in the center of the head of the adults that shifts to gray at the back of the head. In juveniles, the golden color is less pronounced.

Not a lot is known about the golden-crowned sparrow because no in-depth scientific studies have been done on it. Most of what we understand about these birds, therefore, comes from naturalists’ field journals — which exemplifies just how valuable these hand-written journals and the observations they contain really are.

Modern naturalist training programs, like those taught annually by Tuleyome in Woodland, teach modern-day naturalists how to collect data in field journals and then take that hand-written data and enter it into online applications like iNaturalist (https://www.inaturalist.org/). This is one of the many online community science projects through which members of the public can collect and report data in the field and upload it for use by scientists all over the globe.

Because the golden-crowned sparrow hasn’t been studied a great deal, we don’t know very much about its breeding habits, except that it leaves our area to breed in the tundra areas up north in the summer months. These birds are believed to be monogamous. Another community science project, the Christmas Bird Counts, also seems to suggest that its populations are increasing throughout the United States. They’re usually the first migrants to show up in our region and the last ones to leave.

Like the white- and golden-crowned sparrows, dark-eyed juncos (Junco hyemalis) are also sparrows and are actually considered to be the most abundant species in North America. They come in a broad variety of color morphs.

The color type we see most often in our region is the Oregon color pattern, but other colors include slate, pink-sided, white-winged, red-backed and gray-headed. Juncos with the Oregon color have a dark head, brownish-gray wings and a rusty-to-pink blush on the sides. Its beak is pale (usually pink or off-ivory).

At first, scientists believed that the different colors denoted different species, but recent studies seem to indicate that the color variations we’re seeing in the birds right now is actually the result of the process of evolution happening in real-time. Many of the juncos interbreed, so it’s not known which color morphs will survive and which ones will vanish over time.

Although they are not considered threatened or endangered at this time, the populations of dark-eyed juncos have decreased by 50% since 1966. What’s causing the decline isn’t yet fully understood.

Most of these sparrows will come to wintertime birdfeeders to augment their diet, so set out feeders and suet for them where you can. White-crowns like sunflower seeds, juncos like millet, and golden-crowns will eat just about anything including seeds, flower buds and fruit.

There are about seven different color variations of the dark-eyed junco, but the most common one is the Oregon color pattern, shown here. It’s believed that this species is undergoing the process of evolution, and as time goes on, current colors may be dropped or new colors may develop.

— Mary K. Hanson is a Certified California Naturalist, author and nature photographer. She developed and helps to teach the naturalist program at Tuleyome, a 501(c)(3) nonprofit conservation organization based in Woodland. For more information, see their website at http://tuleyome.org.