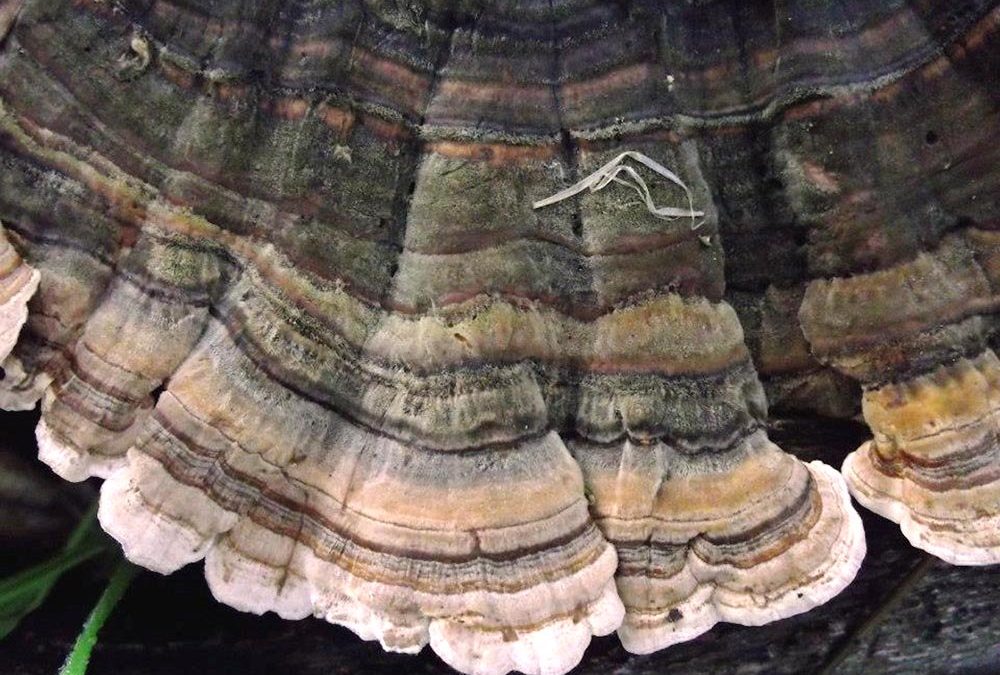 As the weather starts to cool off and the rainy season begins, you’ll be seeing more and more fungi starting to make their appearance in the Berryessa Snow Mountain National Monument region.

One of the most commonly found fungi in our region is turkey tail, which looks something like the fanned-out tail of a wild turkey. But along with the turkey tail there are other fungi that mimic it and grow in similar forms in the same places it does. So, how do you tell them apart?

Turkey tail fungus and the mimics we’ll cover here usually grow on oak trees and other hardwoods. The upper surface of each of them is made up of a concentric half-circle “zones” of varying colors; rings of browns, grays, tans and sometimes even muted orange. They all generate white spores. The fungi are also all “saprobic,” which means they live by facilitating the decay of the dead or dying trees, and they all grow in shelf-like structures (brackets).

To tell the true turkey tail from its mimics, you need to look at the underside of these brackets.

True turkey tail, Trametes versicolor, is a “polypore” (many pored) fungus. On the underside of the fanned-out brackets, you’ll find a white or off-white surface full of tiny holes. Even when the sample dries out, you can still see the porous nature of its underside. These pores, like the gills on mushrooms, house the fungus’s spore producing mechanisms. Trametes versicolor has a slightly corky, leathery feel to it and some of the colored zones on top may be covered with tiny hairs. It’s probably the most common decomposer of hardwoods in North America. It is also considered to be “weakly parasitic”; that is, when it’s finished digesting dead organic material it may connect to living parts of the tree for a little extra sustenance.

The first mimic we’ll touch on is Stereum ostrea, commonly known as false turkey tail. This fungus itself is tough, leathery and totally inedible. Although there is a good deal of anecdotal information about its medicinal properties, scientific studies done on the fungus suggest that while it may “contain potential antimicrobial compounds,” more study is required to see if any of those compounds are actually of benefit to humans.

Like true turkey tail, false turkey tail grows in semi-circular brackets, but this is a crust fungus rather than a polypore. Because fungi, in general, lack any chlorophyll and are incapable of photosynthesis, you won’t find green ones. But sometimes alga grows on and into false turkey tail staining its upper surface green. It’s not believed that this is a communal or symbiotic relationship; rather, it seems that the alga is simply taking advantage of another substrate on which to rest while it goes through its photosynthetic processes.

The underside of this species is flat and smooth, sometimes shiny, and usually reddish tan or brown in color. It has no pores in which to produce its spores. Instead, the whole smooth surface of its underside is considered “fertile”, yet collecting spores prints from this fungus is especially difficult.

The undersurface of the second mimic is even more interesting. Like true turkey tail and false turkey tail, it, too, grows in those multi-colored zonal semi-circles, but underneath it’s very different. It’s called oak mazegill, Daedalea quercina, and although it’s a polypore like true turkey tail, the porous surface on its underside alters significantly as it ages and matures.

In this one, some of the pore walls collapse resulting in a mazelike structure of partitions which are sometimes referred to as gills (although they’re not entirely like the gills of mushrooms). So, oak mazegill is often described as a “gilled polypore” which can seem something of a contradiction in terms to most novice mushroom hunters since they’re often told at the outset that mushrooms either have gills or pores but not both. Spore production is done in and along the walls of these partitions.

Mazegill’s scientific genus name “Daedalea” comes from the Greek myth of Daedalus (father of Icarus) the master craftsman who created the Labyrinth that housed the Minotaur.

If you look carefully on your next walk out into the forest you may be able to see all three of these fungi in a single day: true turkey tail, false turkey tail and oak mazegill. And now you know how to tell one from another.