Home > Inspiration > Talking about Climate During the Holidays, or Conflict Resolution 101 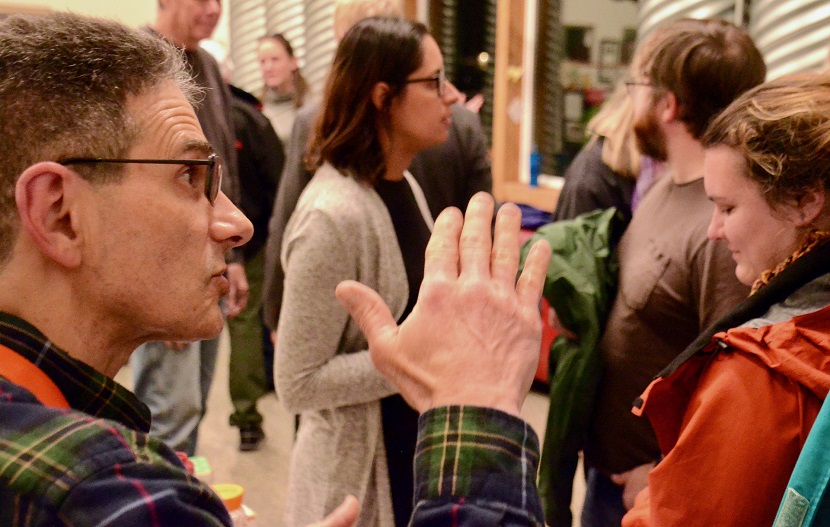 Talking about Climate During the Holidays, or Conflict Resolution 101

It may start with an innocent question about why someone is not eating the traditional turkey or ham main dish. This may lead to a discussion of the potential health, ethical, or environmental advantages of a vegetarian or vegan diet. But reducing meat consumption is potentially among the least controversial of a multitude of potentially divisive topics.

Gallup polling found that 35 percent on average described themselves as conservative, 35 percent as moderate and 26 percent as liberal. These are deeply held beliefs related to political views, religious views, education level, and a host of other factors, illustrating how divided our country has become on significant issues.

Many claim our country is the most divided it has been since the Civil War. Those of us who lived through the Civil Rights and Vietnam War era may disagree, but there’s no doubt that the social divide is wide. There’s also no doubt that such divisions are not healthy for a society that is already quite diverse and becoming more so.

Friends and family members who find themselves on opposite sides of an issue may have a hard time reconciling or even relating. The rift present in American society pretty much guarantees there will be arguments, hard feelings, and a calcifying of positions if we talk at rather than with each other.

Plus, there is no guarantee your brother-in-law will come around to your point of view or you to his. There are no magic words that will result in a meeting of the minds. Enjoy a good argument every now and then; it can be invigorating. But arguing is not likely to lead to a better understanding of the other person’s point of view, which is a first step towards actually changing minds, if that’s your goal.

Some common sense and a few informed tips can help you maintain some level of civility and maybe even allow you and your guests to engage in meaningful conversation in this age of hot-button issues.

In her book We Need to Talk: How to Have Conversations that Matter, author and NPR correspondent Celeste Headlee gives sage advice on how to hold a conversation with someone you may disagree with. The first is to not start with the idea you are going to change the person’s mind. Point, counterpoint pretty much misses the point. Enter into the conversation with the intention you’re simply going to learn something from it.

Be present, open, and listen. Don’t spend time thinking of an answer or comeback to the point the other person is making. If you are, you’re not listening. Ask open questions; who, what, when, where, how and why. Think about the answers and let the conversation flow from there. Don’t make getting your point across your primary purpose.

We are far too inclined to fall into the trap of wanting to talk. As Headlee puts it, when we’re talking, we don’t have to listen to the other person, we are in control and can bolster our own identity. But one person doing most of the talking is not a conversation, it’s a lecture, and doesn’t lead to any openings to explore common ground. She quotes Stephen Covey, “Most of us don’t listen with the intent to understand. We listen with the intent to reply.”

None of this says you must concede the other person’s position. You always have the opportunity to express your own point of view. But if you begin by listening to them, chances are better they’ll ultimately listen to you.

Listen first, then tell your story

In Talking Across the Divide, Justin Lee emphasizes the importance of making sure that the other party is willing to engage. He also suggests that really listening to the other person is the key to meaningful discourse and potential resolution of a disagreement or at least an understanding. To get your opposite party to listen to you, Lee suggests that telling stories can be a more powerful tool than facts and logic. This sounds hard, and it is. He cautions that any movement towards understanding may take several conversations.

Phelps-Roper ran the church’s Twitter account. Angry diatribes with people who vehemently disagreed with her eventually softened on both sides over the course of years. Phelps-Roper says she was persuaded to change because people she originally argued with began to honestly ask her questions about her beliefs, which eventually led her to soften her view of theirs. She left the church and now works to combat extremists.

Phelps-Roper lists four tips for having a successful conversation. First, don’t assume a bad intent. Most people think their views are good, just, and reasonable, even though others may see them as motivated by ill will. Second, ask questions. Asking questions has the double purpose of acquiring information about the other person’s point of view and demonstrating that you’re interested in their position. It will make them more likely to want to listen to yours.

Third, stay calm. It’s important to not let passion for a position escalate into anger. Take a breather, walk away if you must, and come back to the discussion later. Finally, make your case. Present your arguments but do it in a rational and nonjudgmental way. Don’t assume that your position is self-evident but state it as simply, clearly, and as objectively as you can.

Meaningful conversations are worth having

Enjoy the time you have with family and friends this holiday season and try to look forward to the opportunity to meet new people and reach new understandings. Meaningful conversations are worth having. You might not actually change minds, but you may at least learn something.

We Need to Talk: How to Have Conversations that Matter, Celeste Headlee, 2017

Talking Across the Divide, Justin Lee, 2018

Unfollow: A Memoir of Loving and Leaving the Westboro Baptist Church, Megan Phelps-Roper, 2019

Every bit of emissions saved in Davis helps reduce climate impacts for the most vulnerable here and around the world. Donate here: @CityofDavis

Find out if you qualify for tax credits and rebates here! @CityofDavis #livecooldavis

Purchases of ”The Ministry For The Future” by Kim Stanley Robinson at @AvidReaderBookstore in Davis include a bookplate signed by the author! 12 in stock now!
https://www.avidreaderbooks.com//?q=h.calevent&eid=11720