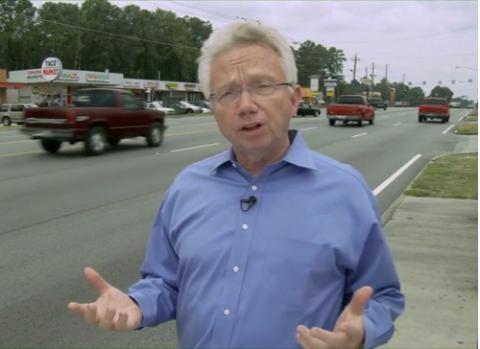 Can the Davis Zoning code affect your medical bills? Your lifespan? The Davis Futures Forum presents nationally known speaker Dr. Richard Jackson on how a city’s design is linked to quality of life, not just in subjective ways but in measurable health outcomes. Dr. Jackson, a medical doctor, was the first to quantitatively link the design of a community to the health of its residents.

Dr. Jackson will talk in Davis Community Chambers on Wednesday, November 6 at 7pm. People are encouraged to sign up for the event in advance on Eventbrite as this event may book up. This talk is timely as the city as recently released the Downtown Specific Plan and will be continuing the process for citywide application next. The speaker will be followed by a panel of city leaders.

Dr. Jackson was the first to link the design of a community to the health of its residents. Formerly a pediatrician and California’ s Chief Public Health Officer, Jackson moved to Atlanta where he became Director of the Centers for Disease Control’s Center for Environmental Health. While there he observed that city design on the micro as well the macro level has a highly significant impact on people’s health outcomes.

When doing epidemiological studies disease, Jackson noted the correlation between the strip mall/suburban lifestyle and sickness. Having studied various city designs he concluded that America’s 20th Century design standards “prevents us from walking, inhibits us from social interaction, and it remove trees and other things that make air quality better. We could not have designed an environment to make it more difficult for people’s well being at this point. Particularly as we are looking at epidemics of obesity.” While retrofitting suburbia to mitigate these issues will cost money, it will also save money. He notes “diabetes has doubled in just the last ten years and it is now costing 2% of the gross domestic product of the entire US.   There is no cost on the value of our reduced life span, i.e., that we are the first generation in American history with a shorter life span.”

Dr. Jackson is an author of two books on this topic and has hosted a PBS TV series. More recently, he has taken on the challenges of climate change. He is a member of the National Academies of Science. His talk on November 6th will describe what it takes to build a truly healthful community, and he will suggest ideas to retrofit existing areas. This prescription suggest our health care “crisis” is more than fixing our medical insurance system, but would include designing places for people to live, work and play so they can be physically active, socially connected, and where children are safe from the dangers of traffic.

For a preview of Dr. Jackson’s approach, watch the trailer for the PBS series, “Designing Healthy Cities” on YouTube.

This event is 14th forum event organized by the Davis Futures Forum, a collaboration between planners, academics, community leaders and residents. These events are sponsored with the help of Cool Davis and the City of Davis with the assistance of Davis Media Access and a major grant from Bike Davis. Davis Future Forum’s mission is to share cutting edge ideas from nationally known speakers so Davis can more effectively address our economic and environmental challenges.