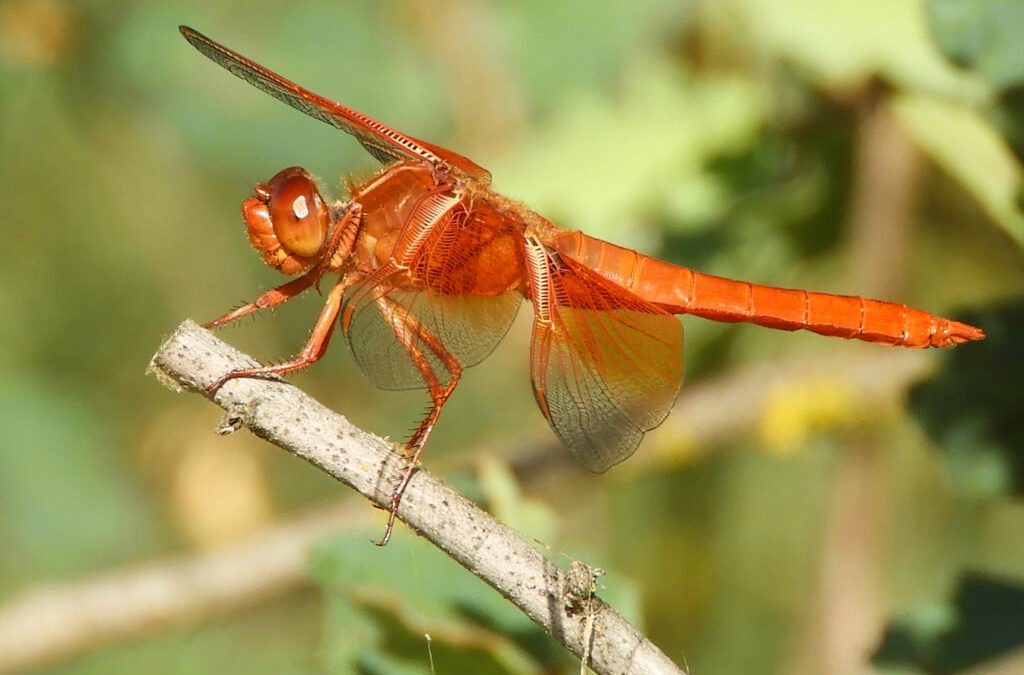 Sometimes you may see dragonflies standing with their rear up in the air. Why are they doing that? Or you may see them perching, and it looks like they have only four legs instead of six. Where did the other two legs go? Let’s find out.

Many dragonflies, and most specifically those species that perch a lot rather than fly a majority of the time, use that rear-up-in-the-air posture, called the “obelisk stance,” for a couple of reasons.

In a species like the blue dasher (Pachydiplax longipennis) or the common whitetail (Libellula lydia), the posture can be used as a threat. Both of these species excrete a kind of waxy substance, or pruinosity, onto their abdomens, which gives the surface a sort of dusty or frosty look

Not all dragonflies have this pruinescence, but those that do often use it in part to help them recognize members of their own species, attract mates and make themselves look more formidable when they’re defending their territories. Blue dashers will raise their abdomens in the obelisk position and orient their bodies to the sun in order to reflect light off that pruinocity and flash bright-white warnings to other males to stay off their turf. 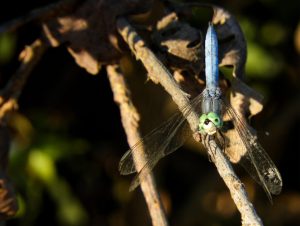 This blue dasher dragonfly (Pachydiplax longipennis) lifts his tail in the obelisk position and orients his body to face the sun to make the frosty looking pruinescence on his body flash a bright warning to other dragonflies to stay away from his turf.
Mary K. Hanson/Courtesy photo

Another facet of the pruinescence is that it can reflect ultraviolet light, which helps the dasher thermoregulate. Dashers, like all dragonflies, are ectothermic, which means they need outside influences to help them regulate their body temperature: generally, shade to cool off, sunlight to warm up.

So, what about the dragonflies that have no pruinocity? They use the obelisk position to thermoregulate as well, but in a slightly different fashion. When its body or flight gear becomes overheated, a dragonfly like the variegated meadowhawk (Sympetrum corruptum), will straighten its body out in the obelisk position so that only the tip of the abdomen is getting direct sunlight and the rest of its body is casting a shadow over the powerpack on its back that houses its flight muscles.

If the powerpack gets too hot or too cold, the dragonfly can’t fly — and flight is essential to these insects. It can’t find a mate, defend its territory or eat without it. So, keeping that powerpack at just the right temperature ensures its survival. A modified obelisk position can also help the dragonfly to warm up on chilly mornings. It will turn its back to face the sun and lift its abdomen so that the sunlight strikes as much of the body and wing surface as possible. Even a fraction of a degree is enough to make a difference.

As I mentioned, flight is at the heart of all dragonfly activity, and dragonflies are amazing fliers. Each of their four wings can move independently from one another and can flap as quickly as 90-beats per second. The top forward-motion flight speed of the larger dragonflies can get up to 60 miles per hour. They can also fly backward, zigzag and hover in the blink of an eye. Now, try to imagine the impact that speed and maneuverability can have on the dragonfly’s head, neck and body.

The dragonfly’s large bulbous head (made up primarily of the eyes) is attached to its body by a fine thread-like neck. The neck is flexible enough to allow the dragonfly to tilt its head sideways up to 180 degrees, drop its head about 40 degrees and lift the head about 70 degrees, but it’s relatively weak. In fact, most dragonflies have special “arrester systems” built of tiny micro-sculptures to help support their heads, especially when in flight. But some dragonflies augment those arresters by using their front legs.

On occasion, you may see a dragonfly fold its two front legs on either side of the neck when it’s perching to help stabilize the head so the eyes can focus more clearly on what’s around it. And in flight, some dragonflies tuck the front legs up behind their eyes to protect the neck from the G-forces and sudden changes in trajectory the dragonfly experiences in flight. So, that’s why you sometimes see dragonflies that look like they only have four legs instead of six (or no legs at all).

Pretty interesting, huh? Look more closely at the next dragonflies you see and try to discover what other unique and fascinating characteristics and adaptations they may have. 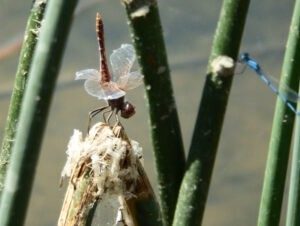 This male variegated meadowhawk (Sympetrum corruptum) is positioning himself in the obelisk position to shade his wing muscles and the majority of his body from the direct sunlight. The “white stuff” under his body on the broken tule is the exuvia (shed skin) of dozens of damselfly nymphs, and that’s a northern bluet damselfly (Enallagma annexum) in the background.
Mary K. Hanson/Courtesy photo

— Mary K. Hanson is a certified California naturalist, author and nature photographer, living with terminal cancer. She developed and helps to teach the naturalist program at Tuleyome, a 501(c)(3) nonprofit conservation organization based in Woodland. For more information, see the website at http://tuleyome.org.