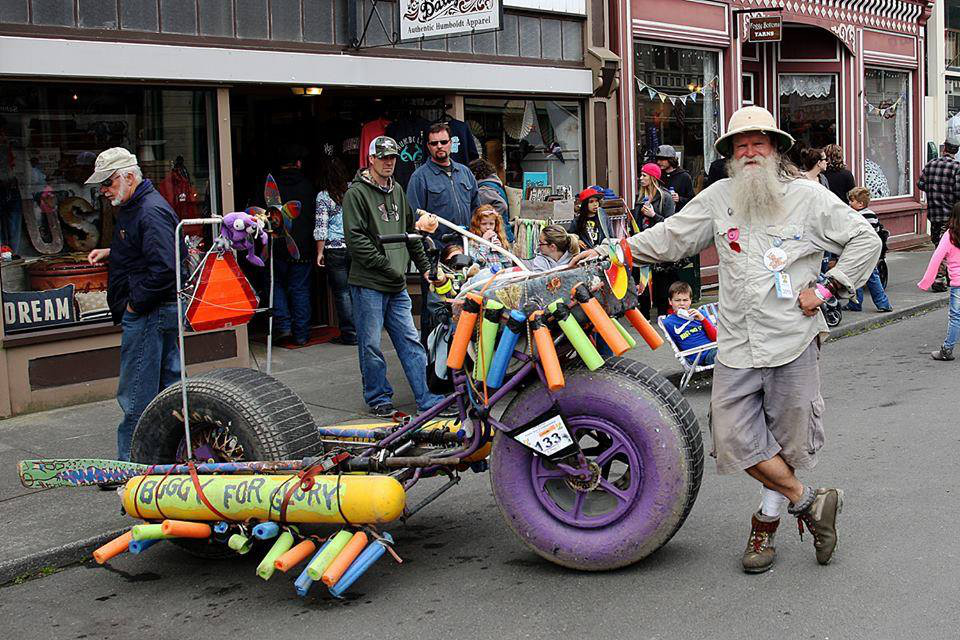 Davis icon and resident of 25 years, Peter Wagner, plans to make an appearance at the city’s first ever Zombie Bike Parade on the morning of October 20th at Central Park. This event put on by The Davis Odd Fellows and The Bike Campaign is expected to attract 500 riders and will take place just weeks before Halloween while townsfolk and visitors from abroad are caught up in the Fall season’s supernatural whimsy. Riders, including Wagner with his renowned Whymcycles, will all be officially “zombified” during a short 20-30 minute bike parade followed by food, vendors and activities. This family friendly event is open for registration at just $5.00 per person at www.zombiebikeparade.com. Proceeds from the event will benefit NorCal Trykers, a non-profit organization that creates custom tricycles for children with special needs.

Having built bicycles since he was 10 years old and living in Los Angeles, Wagner moved to Davis in July of 1994 and brought quite a few of his bikes with him. Over the next two and a half decades starting from his home property and expanding outward, he has turned Davis into a Dr. Seuss like world of bicycling innovation one event at a time!

Initially Wagner and his family would ride their innovative bikes around town for transportation, but soon his neighbors and the community started making special requests. Wagner says “Folks asked me to build tandems and bouncers and hand cycles for their riding needs. Soon I was bringing my bikes to schools for PE classes and incorporating them into parades. My Whymcycles have even been a part of various plays for theater groups. Explorit Science Center, UC Davis, the City of Davis, Cool Davis, the Unitarian Church and schools have all included my Whymcycles in their events. I have shared my Whymcycles in far more events than I can possibly remember”. Wagner has been in the UC Davis Picnic Day parade with his Davis Whymcycle Society for 22 years in a row.

Even Davis’ sister city, Sangju, Korea, which prides itself on being a city of bikes has benefited from Wagner’s creations. He donated a large Whymcycle bounce scooter to their national Bicycle Museum in 2010. But even a custom designed international gift to Korea may not be his largest feat. Wagner shares “On my 60th birthday, Mayor Joe Krovoza presented a two page proclamation declaring my birthday a city holiday in perpetuity, and made a myriad of statements about what my family and I have done for Davis”. And the fun hasn’t stopped; this year, Wagner had 18 or so Whymcycles at the Manetti Shrem art museum’s season opening. He says “They have wanted my bikes at several of their events, even their initial Grand opening on November 13th, 2016, my 64th birthday.”

Preparing now for October Wagner admits “To ride only one bike in the Zombie Bike parade would be tough. I have a large cemetery or a full catacomb’s worth of back-from-the-dead rides to choose from.”

Not only known in one capacity, Wagner has a plethora of interests outside of the cycling universe including science, poetry, literature (especially Mark Twain), history, languages, math, art, drawing, music, and much more. His love of education led him to serve as a substitute teacher for 30 years. Wagner states “I have had close to half a million kids in three counties and many school districts. Kids Google my name in classes and ask me all sorts of questions about what they have read.”

Wagner has assisted with murals around town for the Natsoulas gallery, and he is also the resident on-call mechanic for the popular pedal carousel in Davis’ Central park. The list of accomplishments goes on. Wagner humbly recollects “I’ve done lots and lots of cool things—it’s embarrassing almost, but a wonderful way to meet people and have fun and spread the Green word, right? Being helpful and active and creative is a great way to make friends, have fun, make life worthwhile, help the planet, give examples of how to conserve, save money, have creative outlets, stay fit, lots of fun purposeful meaningful things that life can offer. I also should mention all the help and encouragement I have gotten from friends and family. No bike-man is an island.”

Crossposted from the Zombie Bike Parade. You can read the original post here.