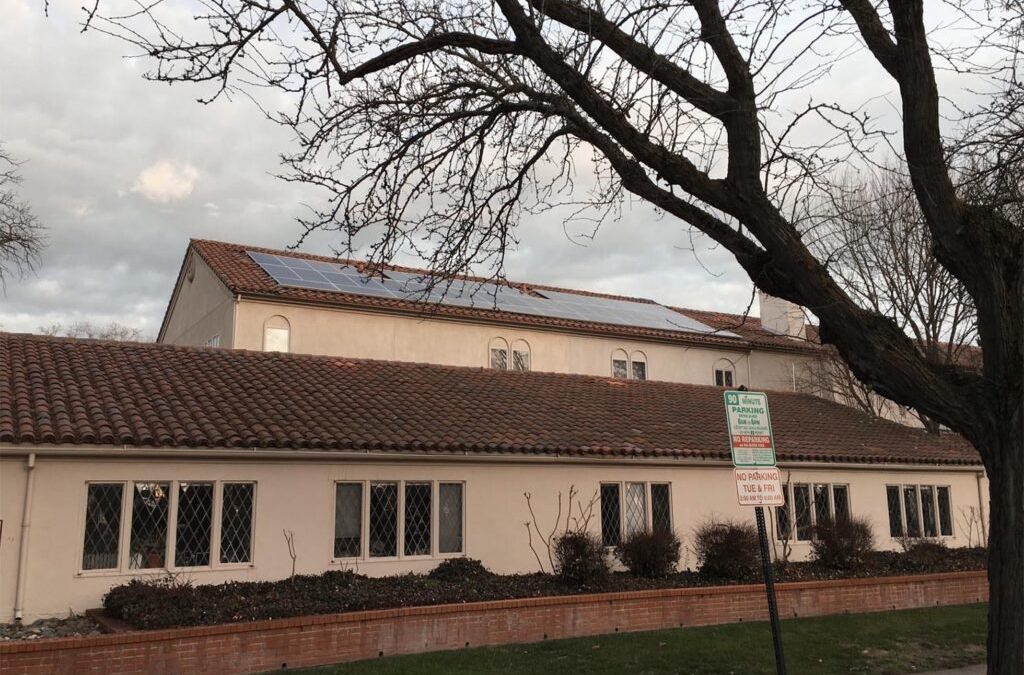 Solar panels at Davis Community, and other churches, providing lots of electricity

A recently installed array of solar panels on the roof at Davis Community Church is now providing about three-quarters of the electricity used by the congregation, which has a one-block campus across the street from Central Park in downtown Davis. Several other local congregations are also reaping benefits from solar panel arrays that they put up years ago.

According to Ron Rushford, a Davis Community Church member who served on a committee that coordinated the installation of the solar array, there are now 135 solar panels up on the roof — 83 atop the church’s Fellowship Hall and another 52 on the roof of adjacent Phoenix Hall.

The solar panels are a little hard to see because of the trees that provide shade along the western side of the church buildings. However, the rooftop installations on Fellowship Hall and Phoenix Hall are higher than the treetops.

According to Rushford, installing the solar panels involved conferencing with city staff, since the main sanctuary building at Davis Community Church (built in 1926, after the church’s previous building was destroyed by fire) is on the city’s list of historic structures.

“We wanted to make sure it was OK with the city, and they gave us the proper location where the panels should be. It took a little while to get the city’s approval and PG&E’s approval,” Rushford said.

The solar array came online partway into March and was formally dedicated with a blessing in June. The solar panels at DCC have been generating more electricity with each passing month as the rainy spring weather has given way to blue summer skies with more hours of sunlight.

On average, the solar panels are providing about 75 percent of the electricity used on the campus, “and more than that in summer,” Rushford said.

Davis United Methodist Church put up a rooftop solar array in 2012, which was dedicated on Earth Day. The church was recognized with an award from the city’s Cool Davis program in 2014. Those panels provide about three-quarters of the electricity used at that site, on average.

The Episcopal Church of St. Martin installed a small array of solar panels nearly 20 years ago and added more in 2015 (including some panels mounted on an overhead metal frame that provides shade in the church’s parking area). The system supplies about 80 percent of the electricity consumed on site.

Editor’s Note: According to Andrew Waterhouse, St James Catholic Church installed solar panels in one of its parking lots last year and that produces most of the power for the campus.