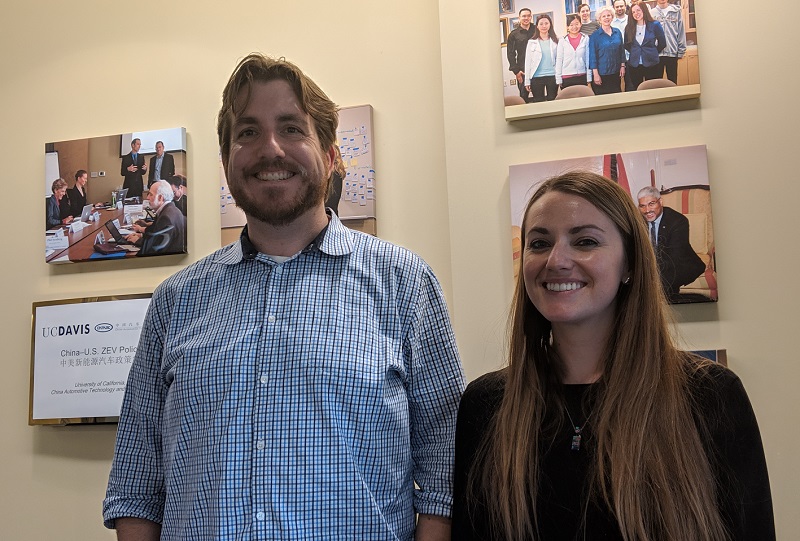 Editor’s Note: This is Part II of a two part article. Read Part I here.

The resolution was  brought to a vote March 26 in the Senate where it failed 0-57 with 43 Democrats voting present (see Washington Post article link after Q&A). In the House, the resolution has been referred to several committees and has yet to be brought to a vote. The Green New Deal would not have the force of law nor provide the funding necessary to reach the goals. As a piece of legislation, the Green New Deal must pass both houses of Congress and be signed by the President in order to become an official statement of US goals.

Cool Davis sat down with two experts from the UC Davis Policy Institute for Energy, Environment, and the Economy to ask questions about the Green New Deal. The following Q&A text is from that interview plus some written information prepared by Kelly and Colin.

Colin Murphy, Ph.D., is the Deputy Director of the UC Davis Policy Institute for Energy, Environment and the Economy and the Policy Director of the National Center for Sustainable Transportation at UC Davis.

Kelly L. Fleming, Ph.D., is the Rapid Response Policy Analyst for the Policy Institute for Energy, Environment, and the Economy at UC Davis.

Q What would you say to critics of the Green New Deal?

Kelly: There are many criticisms around the total cost of this bill. [These] criticisms should take into account the cost of NOT taking action to address climate change. Estimates show GDP shrinking 10% by 2100 if no action is taken, and costing the US economy hundreds of billions of dollars per year.

Q What is missing from the Green New Deal? What would you want to add that is not in it?

Kelly: Aviation, marine, other off-road travel modes because they have a higher barrier to decarbonization due to longer distances that require more energy storage than on-road vehicles. Housing and urban land use practices have huge implications for transportation emissions. The further people must travel for their jobs and daily tasks like medical appointments and grocery shopping, the more GHGs they emit directly. Carbon pricing has been pointed out by media members as a policy that’s not in the resolution. This could be because it is a resolution to set goals, and carbon pricing is a policy to obtain those goals, so the authors wanted to leave carbon pricing policy as the next step.

Another piece that’s missing is research and development investment. We need to invest the research dollars to bring affordable clean technology to market quickly. Recycling/plastic reduction and waste management in the US, which is a large emitter of both carbon dioxide and methane. Considering the life cycle impacts of policies or technologies.

Colin: Some sort of carbon price may be the biggest step you can take to address climate change; it’s clear that a meaningful carbon price is part of the solution. A good cap and trade is better than a good carbon tax, for a variety of reasons. However, in a policy document like this you don’t want a lot of detail. You want aspirational goals that you can build a coalition around, to develop political will to pass bills to instruct agencies to further develop policy.

Q What is the role of the military?

Colin: There have been a couple of analysis to determine the amount of money spent to protect oil reserves. If we did not have the need for oil, we would be much more open to making military decisions based on other factors, like human rights.  The military has been consistently aware of climate change and is one of the few voices in DC telling this administration that it needs to do something. The Navy and the Army have supported research and development into alternative fuels. In this administration the military has been incredibly important in keeping some consideration of climate change prominent. They know that facilities will need to become much more robust to withstand the impact of climate change particularly because Navy ports are threatened by sea level rise.

Kelly: The US military is consistently aware of climate change and has strongly supported modifications, for instance, looking for alternative fuels. They are aware that climate change is impacting their operations. The military has acknowledged and supported action on climate especially climate resiliency. If we address climate change and prevent its worse outcomes, maybe we will save some money by preventing sea level rise wiping out military bases. The military could also save money if its technologies and buildings were more energy efficient. The Department of Defense invests in clean energy research to use on military bases and for deployment technologies like tanks and aircraft. We can meet the military’s goals and other climate change goals, they are not mutually exclusive.

Q Are the goals attainable?

Colin: This is a clear, but ambitious document. Forty percent reduction by 2030 is going to be extremely challenging to do at the national level. California is not on track to meet its own 40% reduction by 2030 goal, at present, and we have a 12-year head start on the U.S. Still, it is absolutely clear that the U.S. can significantly reduce emissions in that time frame using existing technology and doing so can support robust and equitable economic growth provided appropriate policy is put in place.

Q If you were advising the people writing, supporting, and sponsoring this bill, what would you recommend to them?

Colin: This is going to be tough. There are some Democrats not committed to climate policy. To me the most important message is, don’t be too concerned about getting any one individual technology or policy or hitting the 2030 goals. For things we need to do over the next decade, the path looks the same if you are looking at 80% decarbonization or 100%. The path looks the same whether you are looking at all solar and wind or with some nuclear and hydro thrown in.  Whether you are looking at 90% ZEVs or 100% ZEVs. Don’t be too concerned about any one policy.

There is a tendency to say you are not looking at exactly the right goal. That is counterproductive right now. The most important thing for the 2020-2030 timeframe is to get policy that gets us on a trajectory where we can hit the mid-century goals. Worrying about how we are going to get to the last couple of decades is a waste of time right now because the technology is going to change, policy is going to change. So, don’t worry about that, [the question is] are we on a trajectory right now?

Kelly: I would echo that, [we need to] make sure we are on the same page about what goals we need to meet; that’s what this resolution is doing – outlining the goals. It is already creating a conversation that is overdue on climate action. Since the Green New Deal has been introduced, it has become mainstream. Talk about climate solutions is front and center on both sides. It has served a purpose whether or not it passes. The public is way more aware of the problem and what we need to do to make sure there is not a catastrophic outcome, which is definitely positive.

Q What message would you deliver to lawmakers?

Kelly: It is important for everyone in the House and Senate to be on the same page about what they are trying to achieve before getting into the policies that are necessary to achieve it.

When you look at the total costs that are going to be imposed by climate change even over the next two or three decades, it is a lot.  It is possibly enough to say that by investing money now, when you go out five or six decades you are saving money [by reducing the impacts of climate change]. Unfortunately, a lot of the burden and rebuilding cost are paid by communities that do not have a strong political voice. It is the communities that do have a strong political voice that are dominating policy and protecting their interests.

Q Any other comments?

Colin: [Look at the] lesson from California since 2010: [our state] has had faster GDP growth, faster private sector job creation, and faster per capita income growth than the US average even as population grew faster than the US average. This was the time when cap and trade came into effect, low carbon fuel standards, ZEV mandate, all came into effect. All these things that the fossil fuel industry said would cause the wheels to fall off the economy and cause economic collapse and ruin. We’ve managed to emerge stronger from the worst recession since the depression. California grew faster than all nations. Environmental sustainability is absolutely compatible with economic growth.

Policy Institute for Energy, the Environment, and the Economy https://policyinstitute.ucdavis.edu/