Home > Transportation > eBike Pop Up This Saturday at Farmer’s Market 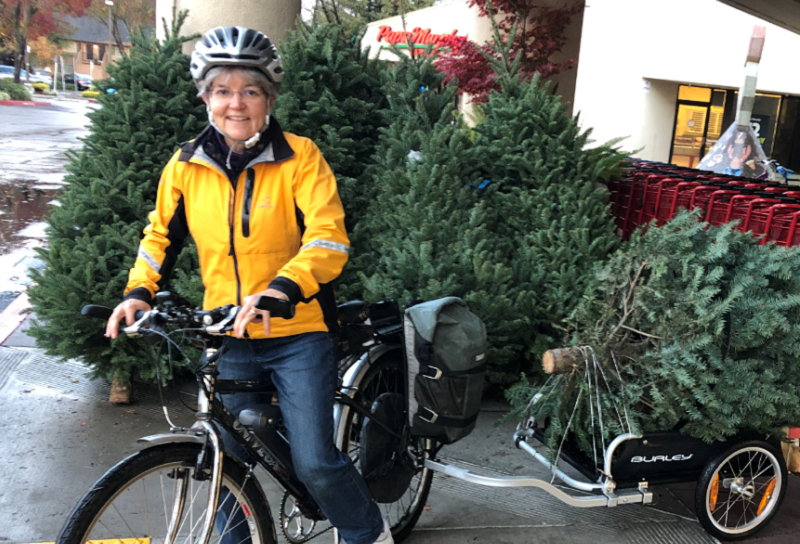 eBike Pop Up This Saturday at Farmer’s Market

You may have noticed a proliferation of specialized bikes gliding effortlessly around Davis lately, perhaps hauling rows of kids or trailers, all in a plethora of shapes and sizes. Come to an eBike Pop Up next Saturday May 18 to find out what it’s all about. Meet a wide array of electric bike owners and their bikes on-site at the Davis Farmers Market. Come talk to real people about their cargo, working, and family bikes; hear stories about how people are using bikes for kid drop off, grocery runs, 10-mile commutes, and hauling all sorts of loads — including Christmas trees!

Locals will offer advice on your bike options and their pros and cons, plus how much fun kids have riding them. Learn how much could you save by leaving your car at home, or how freeing it can be to become a one-car family. A range of bike types will be showcased, including eBikes, long-tails, bakfiets, trailers, and more, many of which can be purchased at local bike shops or online!

In 1998, a Danish journalist declared that bikes could only compete with cars if they could transport groceries and two kids at the same time. Twenty years later, with countless options for electric bikes and cargo bikes, that vision has clearly become a reality. People can now use bikes to go farther, faster with larger loads than ever before.

Davis is home to hundreds of families who have decided to embrace the fun, convenient, and economical experience of eBikes and cargo bikes. “It was so amazing,” Nico Fauchier Magnan of Bike Davis noted at last weekend’s Loopalooza, “to see this number of families who are now riding these bikes around town!”

This eBike Pop Up is brought to you by Cool Davis, Bike Davis, the City of Davis, local bike shops, and other community partners. eBikes are an essential part of the City of Davis platinum bicycle plan that calls for educational events like this to encourage their use. eBikes are faster and require less physical exertion than conventional bikes, and they are cheaper and provide greater mobility than cars. The small size and maneuverability of eBikes and their potential to substitute for cars makes them an important part of the discussion around sustainable transportation. The platinum bicycle plan described research with eBike users in the Davis area finding that “among the sample of individuals who purchased an e-bike, there was an overall decrease in driving, with some users getting rid of their car altogether.”

The shift from single occupancy cars to bikes is essential to meeting City of Davis Climate Action and Adaptation Plan goals overall and the recent Climate Emergency Resolution. The City’s Beyond Platinum Bicycle Action Plan set a goal to increase bicycle trips for school, work, and errands to 30% (from 25%) of all trips taken by 2020. The climate action plan goals call for significant reductions in local transportation related greenhouse gas emissions to 28% below 1990 levels by 2020. Transportation accounted for 57% of Davis emissions in 2010.