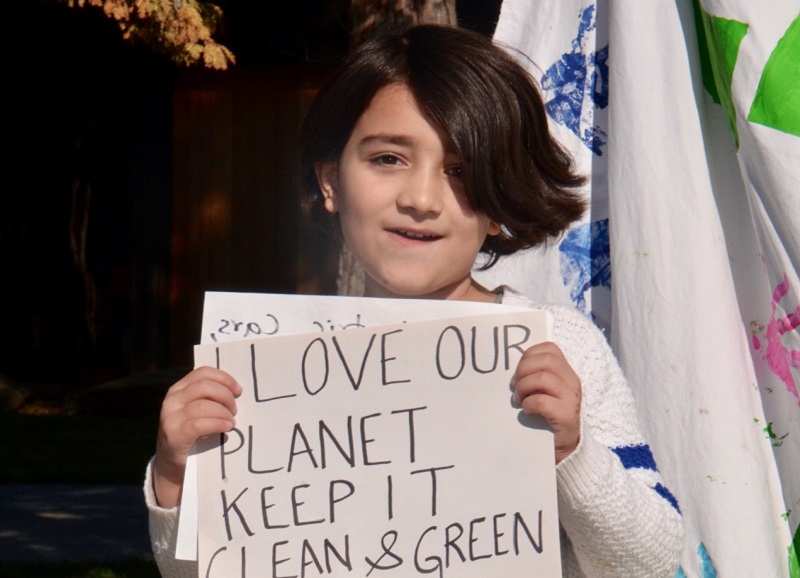 In solidarity with young people across the globe, a small but dedicated band of parents and children gathered in front of the Veterans Memorial Center in Davis today. Signs and banners explained that the kids love the Earth, while the repeated message from many of the students was the need to eliminate fossil fuels. The Raging Grannies of Davis led the group through a few refrains of some signature remixes. While the strike began at 9:30am and lasted until about 12:30pm, quite a few participants departed early to take public transit to the Sacramento Capitol to converge with students from across the region.

Most of the students were elementary ages. Among the students at the Vets, Andrew told Cool Davis he is concerned about penguins. He told us, “You want to help the Earth, so that’s one reason why we’re here.”

Hazel reported, “We’re here because no one else is doing anything about climate change.” This gets “people to pay attention.” She’s concerned that “the oceans will get too warm and acidified.” She added that there are some things people can do, “Not use as much plastic, and recycle stuff, and not drive cars.”

Minsa explained, “I’m here because some cars have a little pipe on the back of the car, that’s where the engine has smoke and we’re making the Earth sick. So use scooters, bikes, or skateboards!” When asked what she wants to the world to look like when she grows up, she replied simply, “spring.” When asked why she was joining with her friends for the climate strike, she replied “Then we can have more kindness in the world.”

Charlie spoke about some studies he heard about our prospects for the future. “Apparently some studies show that in 2022 the world will become uninhabitable, if we don’t really change what we’re doing. … I don’t feel like growing up in an unhabitable world, so I think we should change how we’re doing things so we can stay on this nice planet longer.  … This is literally the downfall of human beings, so it can’t go ignored. I think the world might become uninhabitable and things might go really bad for us, but if things go well, we can maybe last for a very long, long time.”

An Action Network page lays out the mission of the movement and a very specific list of demands and solutions including reference to some of the ideas in the Green New Deal. An interactive map shows hundreds of events across the US, yet marches and strikes happened across the world.

The Youth Climate Strike has been growing rapidly, sparked largely by Greta Thunberg of Sweden, who has been speaking out and leading strikes every Friday for several months. School strikes have been growing and spreading across Scandinavia, Europe, and the world. Greta (@GretaThunberg) spoke eloquently at the most recent COP24 in Poland this past December, and has been organizing the movement using social media and sheer determination with the hashtags: #FridaysForFuture #SchoolStrike4Climate #ClimateStrike #Youth4Climate #YouthUnstoppable.

“My name is Greta Thunberg. I am 15 years old. I am from Sweden. I speak on behalf of Climate Justice Now. Many people say that Sweden is just a small country and it doesn’t matter what we do. But I’ve learned you are never too small to make a difference. And if a few children can get headlines all over the world just by not going to school, then imagine what we could all do together if we really wanted to. But to do that, we have to speak clearly, no matter how uncomfortable that may be. You only speak of green eternal economic growth because you are too scared of being unpopular. You only talk about moving forward with the same bad ideas that got us into this mess, even when the only sensible thing to do is pull the emergency brake. You are not mature enough to tell it like is. Even that burden you leave to us children. But I don’t care about being popular. I care about climate justice and the living planet. Our civilization is being sacrificed for the opportunity of a very small number of people to continue making enormous amounts of money. Our biosphere is being sacrificed so that rich people in countries like mine can live in luxury. It is the sufferings of the many which pay for the luxuries of the few. The year 2078, I will celebrate my 75th birthday. If I have children maybe they will spend that day with me. Maybe they will ask me about you. Maybe they will ask why you didn’t do anything while there still was time to act. You say you love your children above all else, and yet you are stealing their future in front of their very eyes. Until you start focusing on what needs to be done rather than what is politically possible, there is no hope. We cannot solve a crisis without treating it as a crisis. We need to keep the fossil fuels in the ground, and we need to focus on equity. And if solutions within the system are so impossible to find, maybe we should change the system itself. We have not come here to beg world leaders to care. You have ignored us in the past and you will ignore us again. We have run out of excuses and we are running out of time. We have come here to let you know that change is coming, whether you like it or not. The real power belongs to the people. Thank you.”