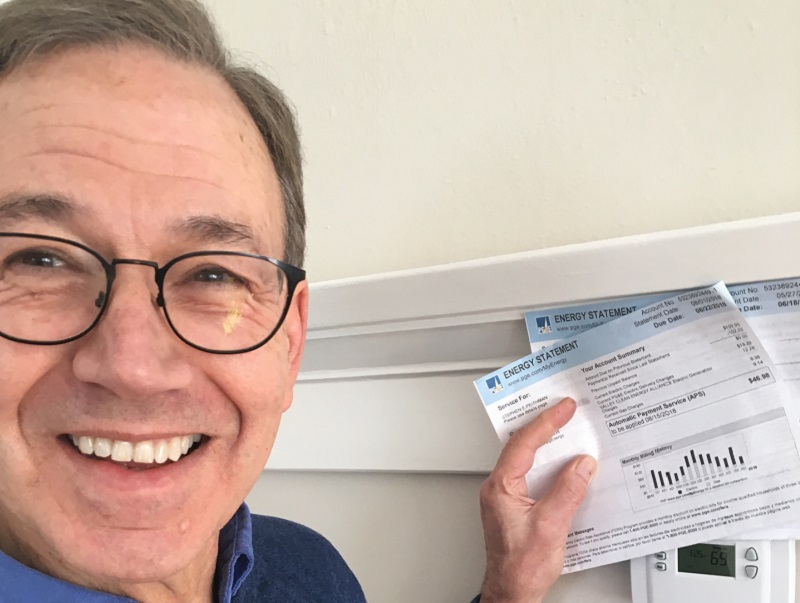 Stephen Peithman had been warned that his West Davis home’s central air conditioner was ready to fail. But he didn’t do anything about it until two years later in April 2015 when he received a letter from PG&E alerting him to potential rebates for energy retrofits.

When he thought about it more, he realized that his air conditioning bills were very high and the system could not keep up to cool the just under 1,300 square foot home. The back room was hot in the summer and cool in the winter. In addition, his home still relied on a very old gas furnace, installed in 1961 (when the home was built), and an air-conditioning system added by the previous owners sometime in the late 1970s. (Steve bought the home in the fall of 1981.)

“Wow, if I can get a rebate, maybe I should look into doing this.”

After Steve checked out the PG&E-approved local contractors to ensure the project would be eligible for the potential rebates, he began his energy efficiency adventure – and it was a good experience.

The contractor Steve selected sent out a specialist to do an assessment of the HVAC (heating, ventilation, air conditioning) unit and the rest of the home. The specialist also did an air infiltration test to decide what size HVAC system would be best for the home. The system recommended (and installed) was more efficient than the minimum California efficiency standard required at the time.

After receiving a detailed analysis of the home that included seasonal energy use by type (heating, cooling, lighting, etc.), costs, estimated savings and three options for improvements, Steve selected the most comprehensive option. At the end of the process, PG&E sent a representative to check the installations. And, of course, the contractor (and Steve) complied with all City of Davis building permit requirements.

“Originally, I thought I’d just replace the HVAC system. It did not occur to me that retrofits like new duct work and more ceiling insulation made sense.”

Two and a half years after the project was completed, Steve continues to be happy with the results. His monthly energy bills are lower and his home is way more comfortable. Because the household make-up changed, it’s hard to accurately estimate the energy savings. However, in the summer, the home is more comfortable than before the retrofit, the air conditioner is not running all the time and the system fan is not needed as much as before to move the air. “Even on super hot days the house is livable,” says Steve, the result of the new air conditioner, additional insulation, and better ducting.

“Originally, I’d only thought about replacing the HVAC system,” observed Steve. “It never occurred to me that other retrofits – like the duct work and additional insulation – made sense, as well.”

For more information, visit the Cool Davis Home Heating and Cooling web page, scroll down to Resources for links to download our full set of planning guides.