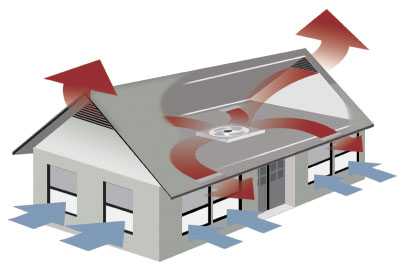 The summer months in Davis are often pretty hot, and it can be a challenge to keep your home cool and comfortable. Most of us rely on air conditioners to maintain a desired temperature, but there are many other energy-efficient and inexpensive ways to cool your house and reduce the need to run your air conditioner. One of these is the “whole house fan.”

You can think of whole house fans as the lungs of a house, pulling air in and exhaling air out. Whole house fans enable you to “naturally achieve comfortable indoor conditions while minimizing energy use and improving indoor air quality.” (See source below.)

Check out our Home Heating and Cooling page for more information about energy efficiency for homes.

The basics on whole house fans

A whole house fan is just what it sounds like: a large stationary fan that can cool an entire home rather than just a small space like a floor or desk fan does. The fan literally cools the “whole house.”

Simply put, any time the air outside the house is cooler than the air inside, a whole house fan can quickly bring large volumes of that cooler air into the house, pushing the warmer air up into the attic where it is then vented to the outside. The result is a cooler, more comfortable home.

Numerous homeowners in Davis report that on many, but not all, summer days they can avoid turning on the AC by running their whole house fans. Using a whole house fan to cool your home successfully really depends on a number of factors: the most important is overnight temperatures.

The Davis Delta Breeze often means that overnight temperatures can drop to 60 degrees or lower even on 100-degree days. This is the perfect scenario for whole house fans, which cool most effectively when the outside temperature is lowest. Most typically, this is very early in the morning.

If you start your day by  running the whole house fan—perhaps while showering, brushing your hair and teeth, and getting dressed—temperatures may continue to hover around 20 to 30 degrees cooler inside than outside throughout the day.

Make sure to close windows and drapes after running the fan in the morning.

Even with this smart start to your day, inside temperatures may still climb later in the afternoon. When you return home from work or after you emerge from an afternoon siesta, tune into that moment when it’s slightly cooler outside than inside, then run your whole house fan again. Sometimes it’s after dinner, other times it’s just after sunset, and, on occasion, just before bedtime.

You may need to run your fan a bit longer or perhaps in two sessions in the evening to push out the hot air and lower temperatures. If you have secured widows, you might consider leaving the windows open throughout the night as you sleep.

Either way, you have rather quickly cooled your home with a small fraction of the money and energy it would take to accomplish the same cooling with an air conditioner. Using your air conditioner selectively like this will help it last longer.

Occasionally, a heat wave raises overnight temperatures to 75 or even 80 degrees, making it more difficult to maintain a comfortable temperature in your house over the course of a day relying solely on a whole house fan. This is when an AC unit or other techniques come in handy. Look for energy and money saving strategies for cooling your home at the end of this article.

A whole house fan can also be used to heat a home by drawing air into the house in the winter when the temperature outside is higher than the temperature inside. For instance, you might run the fan in the heat of the afternoon in January, then use other heating strategies for colder times and at night. 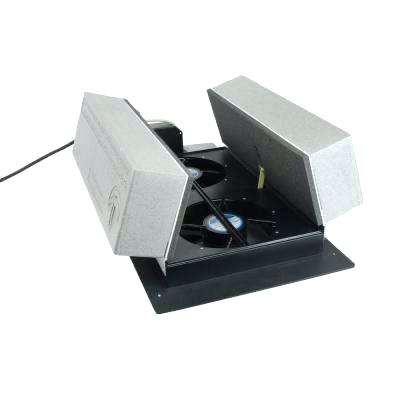 One: the air inside the house becomes as cool as the outside air relatively quickly.

Two: because the air is moving, the “breeze chill” factor can immediately make you feel 10 degrees cooler. It’s like having your very own, private “Delta Breeze.”

Three: the cool air moving through the house, over time, draws out the heat embedded in furniture, walls, and other objects that radiate heat absorbed during the day that can keep a house from cooling down.

Four: on a 100-degree day, attic temperatures can easily reach 130 to 160 degrees even when an air conditioner is running. By “cooling” the attic with air pulled from the interior of your home, whole house fans peel a few layers of “heat blanket” off your living space.

Whole house fans come in different sizes, usually with a diameter of between 24 and 36 inches. The bigger the diameter the more air the fan can pull through a house. Fans typically operate at two speeds, either “high” or “low”. The volume of air moved is calculated in cubic feet per minute (CFM). A 30-inch fan might draw around 5000 CFM at low speed and 7500 CFM at high speed.

There is no one answer to the question of how big to go, though there are “rules of thumb” that those who sell and install whole house fans use. One approach is to multiply your home’s square footage by 3. The result is a rough estimate of the CFM appropriate for your home. Your dealer or installer can help you refine this estimate to your specific circumstances.

Whole house fans are most commonly installed in the attic, via a hole in the ceiling, usually in a central hallway. The fan is stationary and is typically attached to ceiling joists or a frame built to support the fan and its motor. Louvers open when the fan is running and close to seal the hole when it is not.

Whole house fans may also be installed in walls or on rooftops for homes without an attic.

A whole house fan is most convenient when used in conjunction with two accessories: an indoor-outdoor temperature sensor that indicates when the temperature outside the house is cooler than inside the house, and a timer that can be set to turn the fan off after a predetermined run time. Do NOT use a timer to turn on a fan.

Vent covers are another accessory that helps when high attic temperatures transfer heat to closed fan louvers, which in turn radiates heat down into living areas. Vent covers attach magnetically or with velcro to the louvers to reduce this radiated heat. 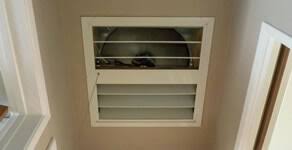 Whole house fans are credited with using, on average, 90 percent less electricity than air-conditioning units. Exact savings depend on variables such as how a home was constructed, its current insulation levels, the energy efficiency of windows and doors, and outdoor shading. Cost savings similarly depend on factors such as how often the whole house fan is used, for how long, and in some instances, at what time of day.

All the variables above—not to mention conversion factors accounting for electricity production—make it difficult to estimate greenhouse gas reductions resulting from whole house fans. One estimate, however, is that “if only 1.1% of U.S. households replaced air-conditioning with whole house fans, the output of an average coal-fired power plant—3.95 billion kWh—would be saved.

Noise can be a downside: here’s some ways to quiet things down 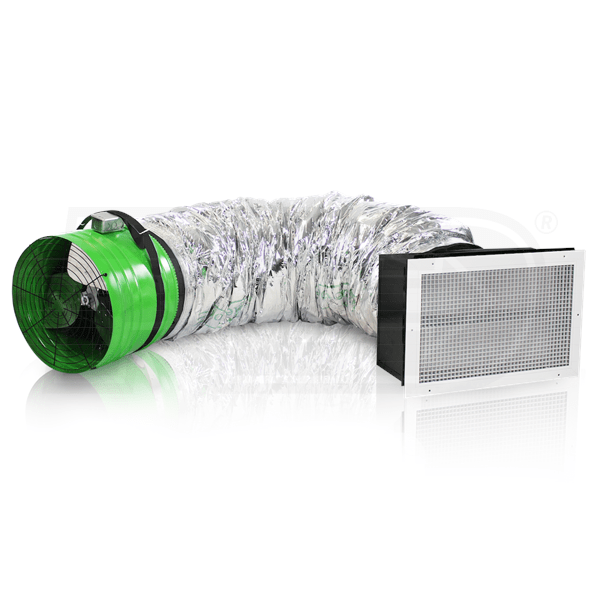 Whole house fans have numerous advantages over air conditioners, but buyers should be aware that they do not operate silently. The sound of the motor, as well as the noise made by the fan blades moving air, are factors to be considered.

Noise from whole house fans located in a central hallway potentially affects areas commonly used by residents, such as bedrooms.

If noise level is a primary concern, consider installing what are referred to as “quiet fans.” Quiet fans get their name because the motor is installed in the attic and connected by a tube to the hole in the ceiling, thereby moving the noise of the motor and fan away from the living space.

Another option is whole house fans that are engineered to be quieter than others.

While whole house fans can be noisy, most families get used to them and—by getting smarter at how it’s done—can reduce the length of time needed to run the fan to cool the space. 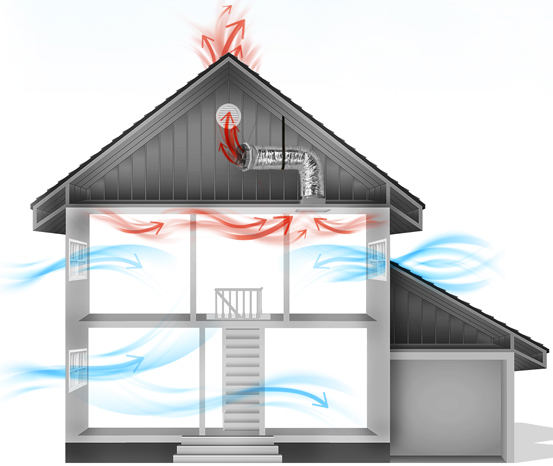 A whole house fan should never be operated without sufficient openings to bring air into the house. For this reason, fans should only be turned on manually after windows or doors have been opened. Fans should NOT be turned on by automatic timers, nor should they be used simultaneously with natural gas appliances such as central heating systems.

The number of windows opened may vary but should include at least a few. The smaller the total square footage of openings, the greater the velocity of air drawn into the house.

Determining which windows to open depends on the areas of your home you wish to cool whether living rooms, bedrooms, or other spaces. In general, limiting the number of open windows increases the rate of cooling along the path from the open window to the fan. Opening windows furthest away from the fan can maximize the area of the home being cooled.

You may wish to consider opening only those windows that can be secured if a whole house fan is to be left on overnight while residents are sleeping.

An open door can provide substantial square footage for incoming air but is best used in conjunction with a screen door to keep insects and other pests from entering the house.

Think about the air leaving your attic

Whole house fans draw air into the attic from interior living spaces. This air must in turn be exhausted through gable vents, soffits, ridge vents, or other openings that permit air to escape from the attic.

A general rule of thumb to determine the square footage of attic openings to the outside sufficient to exhaust air drawn into the house by the fan is to divide the CFM of the fan by 750. For example, a fan with a rating of 7,500 CFM when set at the “high” speed should have 10 square feet of “Net Free Area” (NFA) openings.

NFA accounts for the difference between the physical size of a vent and the size of its opening. For example, if the dimensions of a vent are listed as 4” x 16” the actual open area will be less. NFA specifications are usually provided with the vent at time of purchase.

Mesh screens can reduce NFA by approximately 20 to 25 percent. Over time, screens can accumulate dust and debris that can further reduce the NFA. 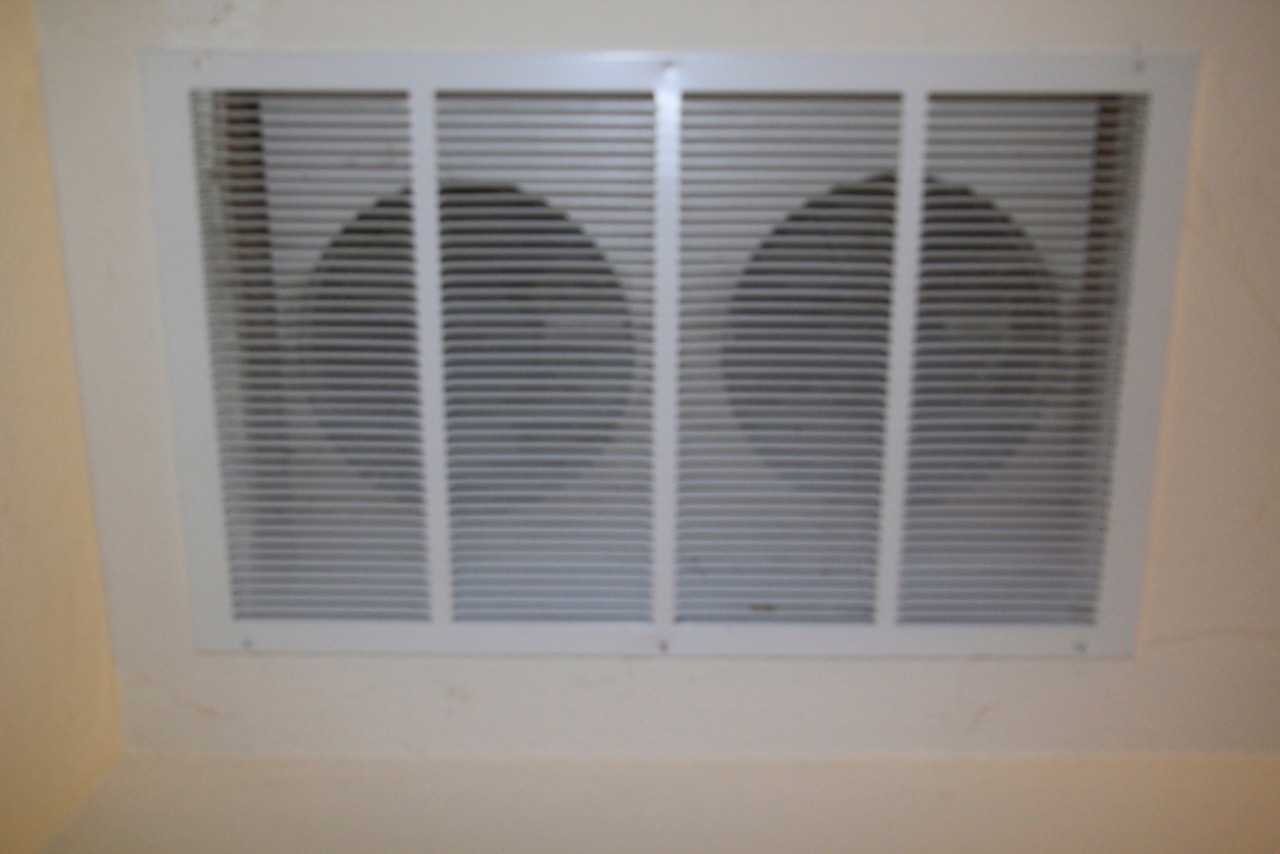 It’s best to think of a whole house fan as one tool in your Cool Solutions toolbox. Try these other Cool Davis strategies to keep your house comfortable:

Check out our Home Heating and Cooling page for more information about energy efficiency for homes.

John Mott-Smith is the Climate Change Advisor for Yolo County and is based primarily in the City of Davis. John is a member of Cool Davis, an active network of residents, community organizations, businesses and community institutions committed to implementing the City of Davis’s Climate Action and Adaptation Plan. John also writes a regular column entitled Per Capita Davis for The Davis Enterprise.