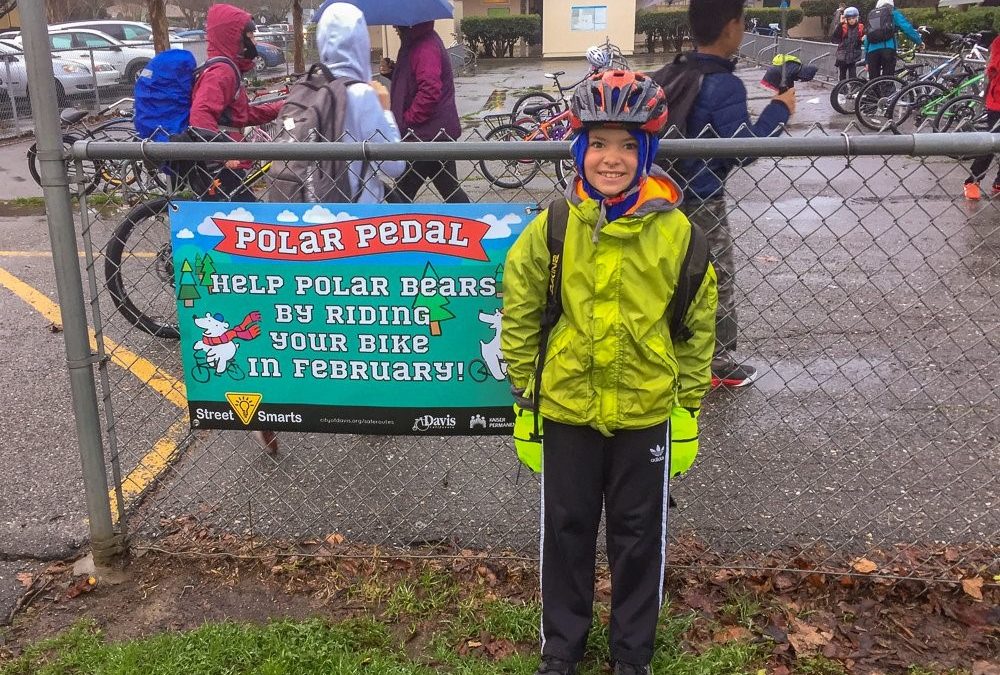 Davis schoolchildren had even more incentive to bicycle or walk to school this month. Their mileage earned points to save polar bears! The final results are in:

18 days of riding to school

Lorretta Moore, the City of Davis’ Safe Routes to School program coordinator, predicted weather wouldn’t be a hindrance this year. She was right with very little rainfall despite the cold temperatures.

This was the second year the city of Davis and Davis Joint Unified School District encouraged students to take part in the Polar Pedal Pledge to reduce pollution and raise awareness about the plight of polar bears. For every 500 car-free trips, schools earned a polar bear “adoption” certificate, signifying students’ commitment to reducing greenhouse gas emissions.

Moore said the program encourages students to start and continue a good habit, and make a positive impact on the world and its wildlife. “Polar bears are sending out an S.O.S. (save our sea ice), so it’s a momentous time to act,” Moore said.

This year, eight Davis schools took part. To encourage Davis students, a scientist with Polar Bears International made a video specifically for Davis students, about how their actions have direct impact on the planet.

Alyce McCall, director of conservation outreach and a staff scientist at Polar Bears International, thanked the Davis students for their efforts so far.

The bar-code scanning software was donated to Davis schools by Davis resident Tim Starback. UC Davis student Tara Parker-Essig volunteered her time to create the graphics for the goal chart at each school, banners, stickers and pledges, and Kaiser Permanente funded a grant.