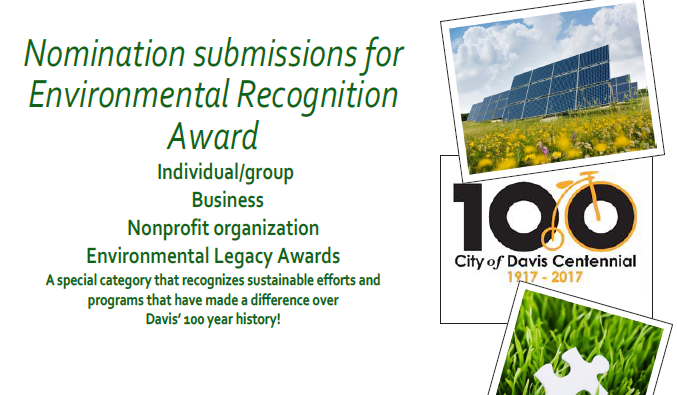 The City of Davis is accepting nominations for the 24th annual environmental recognition awards. Each year this award recognizes a Davis business, a non-profit organization, and an individual or group who have demonstrated outstanding efforts to improve the environmental quality of life in and around Davis. Additionally, an Environmental Legacy Award was added last year which celebrates sustainability efforts that have made a difference over Davis’s 100-year history.

The City’s Natural Resource Commission created the awards in 1995 to celebrate individuals, businesses and organizations living and working in Davis.  Nomination forms are available on the City’s awards page and are due March 20th.

Last year’s award recipients were the Davis Community Church in the non-profit category, based on efforts to impact issues related to climate change and climate justice. Two Davis businesses were selected as co-awardees in the business category: Indigo Hammond + Playle Architects, based on impact of their work in the Davis community, and Whole Systems Designs, based on water-wise, ecologically friendly design and construction. And in the Individual category, Yolo Interfaith Alliance for Climate Justice was selected. Their mission is to inspire the community to work together to reduce dependence on fossil fuels, become educated on climate issues and speak out for climate justice.

The Environmental Legacy Award recognizes events, programs or milestones that have made a significant difference in Davis’ environmental quality of life.

Celebrating the 50th anniversary of the first bike lane in the United States implemented in Davis, California in 1967, the inaugural ERA Legacy Award was awarded to the bike lanes and paths that connect our community.

Nomination forms are available on the City’s awards page. A list of all award recipients is also included on the webpage. For any questions, contact Kerry Daane Loux, Sustainability Coordinator, at 530-747-8246 or kloux@cityofdavis.org.

Nominations are due by March 20, 2017. Award recipients will be selected at the March Natural Resources Commission meeting and presentations will be made at the April 10 City Council meeting prior to Earth Day.