Home > Transportation > Car-free Davis: Light up your bike, to see and be seen 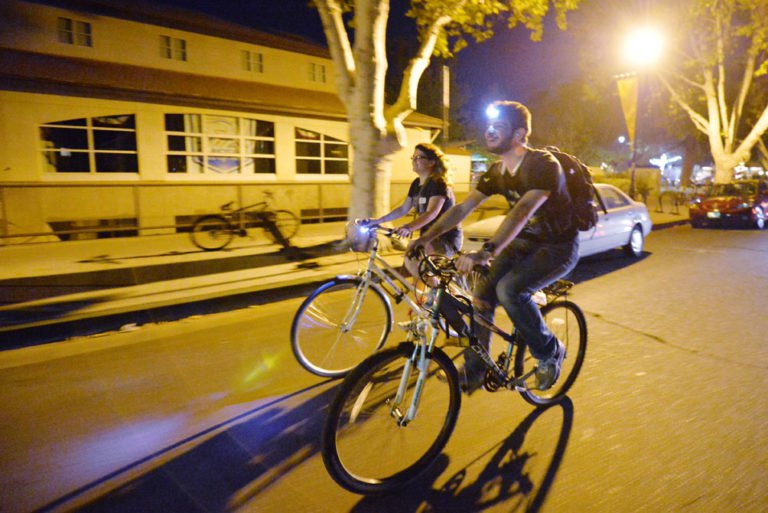 Car-free Davis: Light up your bike, to see and be seen

From page B5 | Crossposted from the Davis Enterprise

Darkness is falling fast now that daylight saving time has ended, and the city of Davis wants to ensure that bicyclists can be seen and be safe.

One of the most common complaints we hear is about bicyclists riding without lights. In an effort to address that problem, the city’s Bike and Pedestrian Program is giving out free bike lights. Providing these lights doesn’t just help people on bikes, they benefit all road users.

Since February, the city has handed out more than 2,000 lights to cyclists who were riding without lights. The distribution of lights is part of the city’s Light the Night campaign, whose goal is to make people on bikes more visible and therefore safer. Providing a large number of bike lights to the community requires assistance from both our community partners and the Davis Police Department. Here are a few details about our outreach efforts and some bicycle lighting tips.

A special thanks to the Davis and UCD police for being by our side as we handed out bike lights. We simply would not have a successful program without the assistance of the Police Department. The police officers asked people without bike lights to “pull over” and then staff and volunteers installed the lights.

The city of Davis Bike and Pedestrian Team also would like to extend our sincere appreciation to the Davis Bike Club for its generous donation of $1,000 to purchase bike lights. With the donation, the city will be able to purchase almost 1,500 additional bike lights for distribution.

If you would like to help out, we accept bike lights or monetary donations at the Davis Public Works Department, 1717 Fifth St. In the spring, bike light vending machines will pop up at restaurants, bars and theaters in Davis to provide bike lights in a pinch.

When riding your bicycle at night, always have a white light in the front and a red reflector visible from the rear. A solid or flashing red light in the rear is even better as it will help you be seen. During our light giveaways, the police officers stopped a handful of people riding with red lights on the front of their bicycles.

Having a red light in front is not only against the law, it’s very dangerous. A red light in the front confuses motorists, who expect to see a red light traveling away from them not moving toward them.

Rather than using a bike light, some people were observed holding their cell phone flashlights in their hands. This also is not allowed by the California Vehicle Code. If a cell phone flashlight is used, then the light must be attached to the bicycle or the person. Holding a cell phone in your hand might compromise a cyclist’s ability to steer or apply the brakes.

Plan ahead and always carry your bike lights, because you might stay out later than expected. The small lights the city gives out can easily fit into a backpack or purse. Turn on your bike lights when you see motor vehicles with their lights on.

If you have any comments about this column, please email me at jdonofrio@cityofdavis.org.

Upcoming events: Speaking of lights, join the bike light parade on Thursday, Nov. 30, as part of the Children’s Candlelight Parade and Holiday Tree-Lighting event in downtown Davis. Bike riders will lead the walking parade to the E Street Plaza, leaving from the Davis Food Co-op, 620 G St., at 6 p.m. The ride will be slow, fun and casual.

I highly encourage people to light up their bicycles and play music! See you there!

— Jennifer Donofrio is the city of Davis’ bike and pedestrian coordinator; her column is published monthly. Reach her at jdonofrio@cityofdavis.org