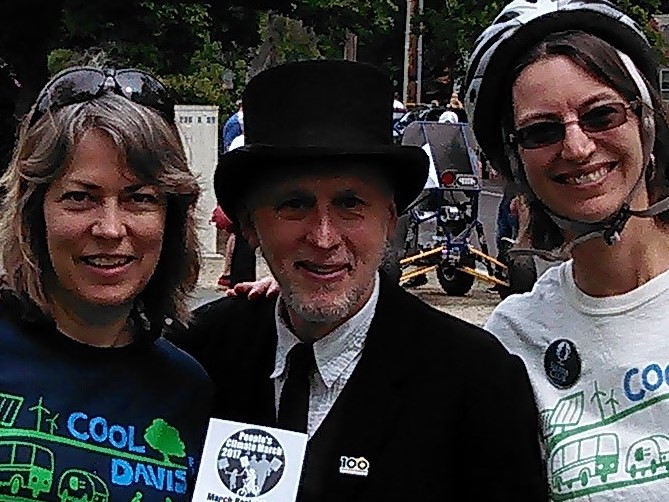 By Robb Davis, Mayor of Davis

Crossposted from the Davis Enterprise | From page A5

So how are we doing on our sustainability goals, Davis?

Well, there has been a lot of progress since the City Council adopted the Climate Action and Adaptation Plan in 2010. It’s not easy to measure the full impact of our efforts in energy use or greenhouse gas reductions yet.  But we know, that when we act in Davis the impact is remarkable; we can see it everywhere!

Here is a list of forward-thinking actions our community has accomplished in recent years.

* The city and Cool Davis have sponsored five festivals, multiple transportation events and solar fairs to educate and promote action by households in the community.

* Hundreds of households have signed up to be Cool Homes and made lists of what they’ve done and plan to do next (see the Cool Homes checklist at www.cooldavis.org/take-action).

* In every neighborhood, lawns are being changed out for drought-tolerant and native plants, and homeowners and businesses are adding permanent water conservation devices and solutions.

* As a community, we have reduced water consumption by 30 percent and the city, with resident input, passed ordinances allowing greywater and rainwater capture.

* The city now collects food green-waste at the curb, keeping compostable materials out of the landfill.

* The city has partnered with Yolo County to form the Valley Clean Energy Alliance, a Community Choice Energy program set to begin serving customers in spring of 2018. This will put energy decisions in the hands of our local communities, making it possible to increase local renewable electricity production and use.

* The city has replaced street, park and greenbelt lighting with super-efficient LEDs, saving energy, greenhouse gas emissions and money. With high-quality LED lighting and 90-percent-plus energy savings in our parks and greenbelts it’s not surprising that Honolulu, Denver, Phoenix, Houston, New York, Australia, New Zealand and even Sebastopol have been calling.

* Nearly 3,000 homes now have rooftop solar, making Davis one of the highest per-capita solar production communities in the nation, earning a SolSmart Gold designation from the U.S. Department of Energy.

* Hundreds of households all over the community have improved the energy efficiency of their homes and businesses by sealing leaks, improving insulation, replacing windows, and upgrading heating and cooling systems.

Improved transportation mode share and use of alternative-fuel vehicles:

* We completed our first “road diet” along the Fifth Street corridor in summer 2014.

* The city, Cool Davis and its partners are designing household action plans for campaigns for solar, energy efficiency, EV adoption and more.

* The city has completed a plan to stimulate electric vehicle adoption by improving and expanding charging infrastructure, which also will improve local air quality.

* The Beyond Platinum action plan provides a detailed roap map for implementing bike programs that will help Davis achieve its long-term emissions reductions and mode-share goals.

So, to paraphrase our governor — Davis is not going back!