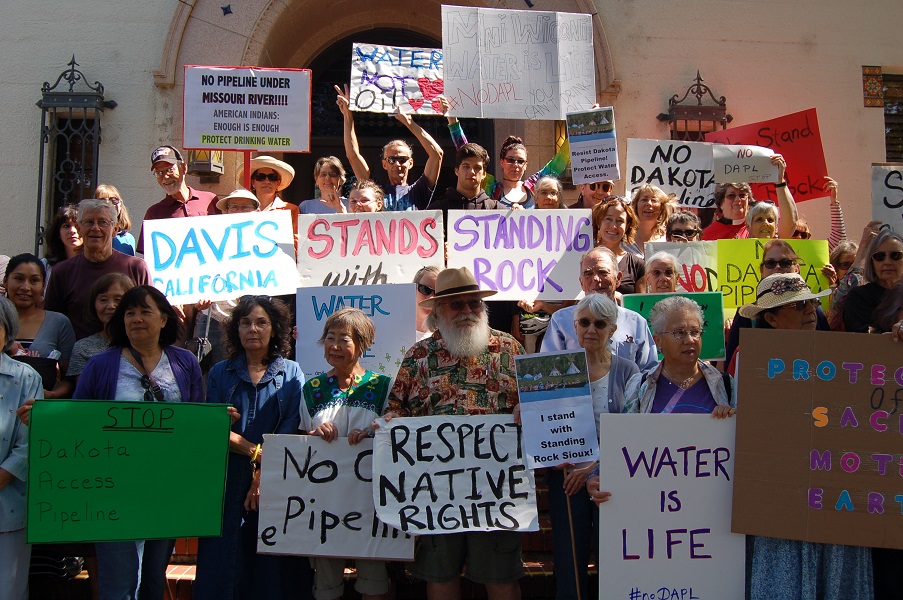 The Army Corps, in obedience with Trump’s memo, have withdrawn the Notice of Intent regarding the Environmental Impact Statement (EIS) for the Dakota Access Pipeline (DAPL).  At the same time, they have granted all easements and permission for Energy Transfer Partners (ETP) to complete the DAPL.

ETP has starting drilling under Lake Oahe.  In fact, they say it is going faster than expected and they may be done in early March.  Read on to learn what you can do.

Take Action!  Write a letter.  Read Steve Hampton’s blog which includes his own letter on what the EIS should cover as an example here.  His earlier blog explains the EIS process and offers background and information for the letter content here.   You can copy his letter heading and email you letter by February 20.  Letters are still important in this legal process.

Original letters detailing what should be included in the EIS study are best.  If you’re unable to write your own, scroll down for two letters already written than you can simply sign.

(Original article) The Standing Rock Sioux continue their fight to keep their sacred land intact and their water safe from oil spills. The U.S. Army Corps of Engineers is conducting an Environmental Impact Statement process set in motion by President Obama, and it is open for public input until February 20. They are seeking public comments on what to include in their environmental study on the pipeline.  This is still worthwhile as of February 16.

On February 7, the Army Corps of Engineers notified Congress that – within the next 24 hours – it will issue an easement to allow the Dakota Access Pipeline to cross under Lake Oahe in North Dakota near the Standing Rock sioux Tribe reservation. The Corps also reversed its Dec. 4 decision and announced that it would forego the preparation of an environmental impact statement analyzing alternate routes for the controversial crude oil pipeline.

“The drinking water of millions of Americans is now at risk. We are a sovereign nation and we will fight to protect our water and sacred places from the brazen private interests trying to push this pipeline through to benefit a few wealthy Americans with financial ties to the Trump administration.”

The wrongful termination of the EIS ordered by the Obama administration will gag dissenting Americans who would have had until February 20 to make public comments. President Trump’s reversal of that decision continues a historic pattern of broken promises to Indian Tribes and violation of treaty rights.

A Davis event was held Feb. 8 at 12:30pm outside Army Corps of Engineers office, at 609 2nd St, Davis, California 95616.  Find a Face book description here.  The Davis event is part of a called worldwide day of action.

If some people need help getting started, this link to a CREDO letter may help.  The Standing Rock Sioux say the pipeline poses a threat to their drinking water, their sacred sites, their indigenous rights, the environment, and the climate, and therefore construction should not be allowed.

The Deadline for public comments is Feb. 20: Click here to add to the letter and submit it.

The Dakota Access pipeline would carry dirty oil per day from North Dakota to Illinois and cut through fragile wildlife habitat, environmentally sensitive areas, and sovereign tribal property.1 In particular, the Environmental Impact Statement currently being prepared is considering the last part of the pipeline that would cross under the Missouri River, threatening drinking water downstream if a catastrophic oil spill occurs.

Buckling under massive pressure by Native American water protectors in North Dakota and millions of activists across the country, the Army Corps announced in December that it would not grant an easement to let the pipeline cross under Lake Oahe near the Standing Rock Sioux tribe reservation and instead would prepare an EIS for alternative routes.2

This public input time is the next step in protecting the Standing Rock Sioux’s tribal rights and water supplies as well as protecting the environment and slowing runaway climate change. While Trump’s executive action puts pressure on the Army Corps to speed up or withdraw its environmental study altogether, it’s critical that the Army Corps hear what topics they should consider in the EIS by February 20.