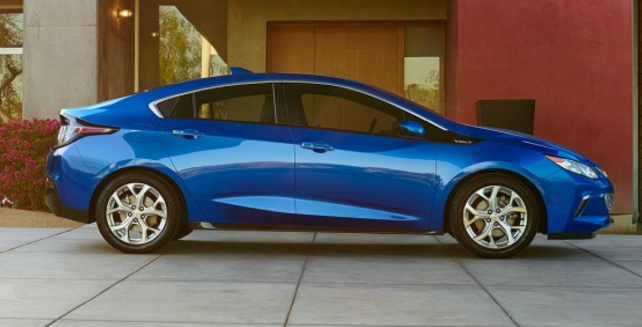 What’s in a name? For the model identity gurus at Chevrolet, the right name requires an “electric” allusion if you’re talking all-electric (EV) or plug-in hybrid vehicles. There’s the small all-electric Spark, the new Bolt, scheduled to debut on the West Coast this spring with its reported 200-mile electric range, and then there’s the plug-in hybrid Volt.

Completely redesigned in 2016, the Volt is unique in the pantheon of electric and hybrid vehicles capturing the best of both worlds. And it does a pretty darn good job of it. First, the Volt’s big 18.4 kWh lithium-ion battery pack boasts an industry best all-electric range for a plug-in hybrid of 53 miles when fully charged. That’s roughly twice the distance of most plug-in hybrids.

Range anxiety an issue? Because it’s a hybrid, the Volt also has a back-up gasoline engine for longer trips.

To eek out a little more range, the Volt has a “paddle” on the steering wheel that, when squeezed, enhances the battery’s regenerative function. This may add a few miles to the electric-only range according to reports.

Chevy estimates the all-electric range should cover a full 95 percent of all trips.

Chevy estimates the all-electric range of 53 miles should cover a full 95 percent of all trips.

While your driving patterns determine your range needs, for most of us, 53 miles covers a big portion of our driving.

The unusual qualities don’t stop there.

Unlike most hybrids, the Volt’s gas powered engine can actually charge on the fly. So, on a long trip you may be able to go from electric to gas then back to a fully charged battery. As a hybrid with a 1.5 Liter engine, Chevy calculates the Volt will take you 420 miles before you need to stop for gas on an extended trip. Volt drivers reportedly average 1,000 miles of electric and gas powered driving between fill-ups.

Charging the battery when fully discharged takes 13 hours with a 110v circuit and 4.5 hours on 220v. The Volt does not have a fast DC charge option.

I recently test drove a 2017 Volt at our local Chevy dealer, Hanlees. Sales people Julia Marin and Melissa Hernandez did a good job answering my questions and showing me around the vehicle.

To get out the most negative aspects right away, the Volt is a compact, so don’t plan on enjoying a long trip in the back seat. As with many modern aerodynamically designed cars, the roof line is low and the width is limited. While the Volt is advertised as a five seater, the middle seat in the back straddle a console. That position might be, at best, adequate for a child. The door and roof height in the front is not generous, but enough ample for most adults. After this, it gets much better.

The recent 2017 redesign makes for a sporty looking car with clean lines. The driving position is comfortable. The gauges are clear. There is an abundance of data on all-electric range and power consumption available at your finger tips. A backup camera is standard. Typical of electric vehicles, the cabin is quiet and acceleration is impressive.

The Volt will allegedly go from 0 to 60 in 7.8 seconds, a claim I did not test. We did not exhaust the battery during the test drive, but by report, the gasoline engine is essentially unnoticeable when it kicks in. Unlike many hybrid vehicles, the Volt does not constantly switch between gas and electric power.

The Volt offers two trim options. The LT is the base level with a beginning MSRP of $34,095. Higher up is the Premier which starts at $38,445, which adds leather seats, parking assist, upgraded driver information center, and navigation. The Premier Hatchback I drove had an MSRP of $46,500 with added upgraded paint, blind-side alert, heated leather wrapped steering wheel, forward auto braking at low speed, forward collision alert at higher speed, upgraded navigation, and a few additional options.

In other words, you do not need to limit creature comforts to drive a plug-in hybrid.

Because of its large battery size, the Volt is eligible for a full $7,500 federal EV tax credit. In addition, the California Clean Vehicle Rebate Project adds a rebate of $1,500. New income limits make this available only for single filers with a reported income of $150,000 or less, $204,000 for head-of-household filers and $300,000 for joint filers.

However, those with an income below 300% of the federal poverty level can even qualify for an additional $2,000. For more specifics, visit the California Clean Vehicle income eligibility page.

The Volt battery pack is warranted for 8 years or 100,000 miles, whichever comes first. The rest of the vehicle gets Chevy’s standard 3 year-36,000 mile bumper-to-bumper warranty and 5 year-60,000 miles on the engine and power train.

Here are a few facts to indulge your inner EV geek. The Volt’s power train was significantly redesigned for the 2016 model year. It now has two electric motors that drive the car in all-electric mode. When the battery level is low, the gas engine engages. At that point, things get interesting. The Volt continuously monitors engine speed, battery charge, and power demands to propel the vehicle in the most energy efficient manner. When possible, it will transform one of the electric motors into a generator that will charge the battery as you drive. This feature is exclusive to the Volt.

The Volt is rated at 106 MPGe when driving in all-electric mode. To determine MPGe ratings, the U.S. Environmental Protection Agency (EPA) uses a set amount of electric energy equal to the energy contained in 1 gallon of gasoline. It doesn’t make sense to compare this number with a gas fueled car’s mpg, but this bit of data may be useful when comparing other electric and plug-in hybrid vehicles.

When the gasoline engine is operating, the Volt gets 42 miles per gallon city and freeway combined. This is very respectable although not tops for a plug-in. Still, given the best all-electric range for a plug-in, the Volt presents a very competitive package. You will need to decide whether increased all-electric range or somewhat-better-mileage when operating as a gas engine hybrid is to your advantage given your driving routine.