Home > Inspiration > Report from Richmond on Soil Not Oil Conference 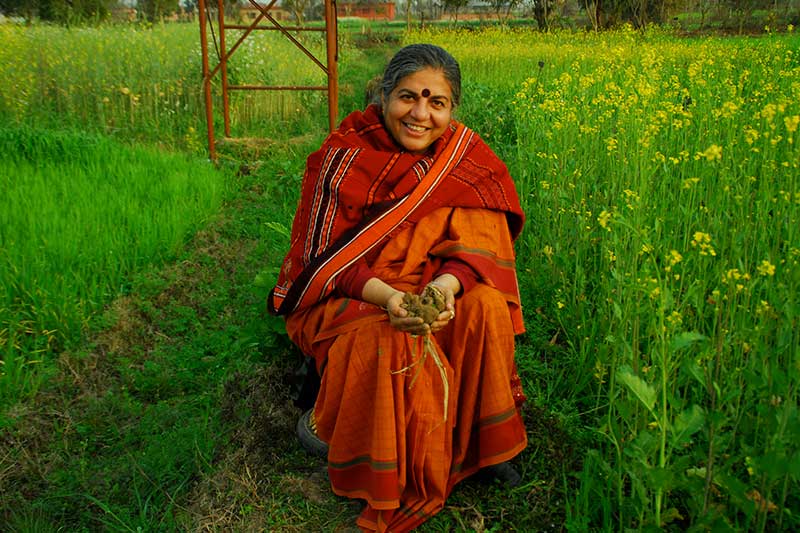 Report from Richmond on Soil Not Oil Conference

The second Soil Not Oil International Environmental Conference, held at the Richmond Memorial Convention Center at Civic Center Plaza, this past August 5th and 6th, 2016, promoted in simplest terms the idea that we can mitigate climate change and reap numerous other benefits by returning carbon back to the soils.

With over 60 participating organizations, the conference, titled “Agro-Ecological Practices to Mitigate Climate Change and Restore Ecosystems,” included nearly a dozen panels and scores of breakout sessions.

I went looking for inspiration and while it can be said that one often finds what one is predisposed to find, the reasoning and inclusiveness of the regenerative soil movement embodies something that the environmental movement has been waiting on for a very long time: a grand and positive message.

The majority of the conference was about celebrating living soil and the inspiration that a diverse audience of scientists, local and federal representatives, indigenous leaders, farmers, ecologist and global social justice leaders have found in dirt.

We can experience hope if we become stewards of a living bio-diverse soil.

Without any illusions about the foregone entry into a climate changed planet, a variety of speakers like renowned soil scientist David Montgomery author of “The Hidden Half of Nature” were able to articulate that we can experience hope if we become stewards of a living bio-diverse soil.

Probiotics, permaculture, carbon capture, low till farming, and food systems were all tied together by the regenerative theme of “We can do this!”

The co-founder of the Regenerative Design Institute, Penny Livingston-Stark, cited an optimistic finding that increasing global soil humus by 1.6% would bring our atmospheric CO2 level down to pre-industrial levels.

Increasing global soil humus by 1.6% would bring our atmospheric CO2 level down to pre-industrial levels.

Tragically, what is under our feet — much of the loam soil that is Davis and the great Sacramento Valley — is an abundance of sustainable living whose potential is being depleted by well intended, but ultimately self-destructive conventional farming and gardening.

US Federal studies and UN studies were quoted about the consequences of high tillage chemical intensive monoculture farming and the disappearance of arable soil in as few as 28 years. According to the conference website:  “Deforestation, erosion, and industrial agriculture cause the decay of soils and in consequence the release of carbon and other GHGs into the atmosphere. While the fight to stop fossil fuel extraction and consumption is essential, it is only half of the equation required if we are serious about mitigating climate change. Non‐sustainable management of soils through industrial agriculture causes over 30% of planetary carbon emissions, with 1/3 of the total global warming effects of industrialized nations attributed to an unsustainable food production system.”

Insight to the composition of the conference was provided by Andres Soto, Richmond community organizer, who asked various geographic factions stand when he addressed the crowd before highlighting the accomplishments of Richmond’s own journey with his organization Communities for a Better Environment. Most of us came from the East Bay and Greater Bay Area, there was a good number from out of state and from what I could see the racial mix was likely a slight majority Euro with Latino, African American, indigenous people, and internationals in that order.

In all I found Richmond a little challenging, but quickly warmed to the low profile residential neighborhood that I walked through to and from mass transit, the Airbnb hosted room, and the Civic Center over the two days.

It was my conclusion that Davis might benefit from the positive and civil tone of the Communities for a Better Environment, a consortium of Richmond activist leaders, scientists, and lawyers whose core group meets twice a month and who hold open meetings monthly to organize their policy positions.

The trends of environmental malfeasance are not different than those outlined to me in my college ecology class in 1980 – it’s just that the negative externalities (no longer so far removed) are better documented 36 years later.

Overall, the message of the Soil Not Oil conference was the promotion of broad participation in regenerating the soil by all people as the empowering, just, and inspiring way forward. The experience convinced me, that ultimately, and in the not too distant future, we will need to bury the harmful practices of large-scale speculative farming and turn our attention to protecting and embracing localized healthy and just food.

For Davis, I think the most salient message from the conference is that top-down technology is not the answer. This sentiment was captured nicely by keynote speaker Andrew Kimbrell, an internationally recognized public interest attorney and Founder and Executive Director of the Center for Food Safety.

“When I speak to people who are a little less familiar with what we are talking about here, I like to tell them that there are two technologies that can stop climate change. You know we’re a pretty technophilic society, so they always seem a little disappointed when I tell them these two technologies are soil and trees.”

Andrew Kimbrell is an internationally recognized public interest attorney, public speaker, and author. He is founder and Executive Director of the Center for Food Safety. He also is Director of the San Francisco based Center for Technology Assessment, co-founder of Foundation Earth, and President of the Board of Humane Farm Animal Care (that administers the Certified Humane label).

For a video of Attorney Andrew Kimbrell’s keynote address: https://youtu.be/tSGikG-idic

Notable soil scientist and activist, Vandana Shiva, author of the text “Soil Not Oil,” was the keynote speaker for the first conference in 2015.

For general information about the conference: http://soilnotoilcoalition.org

For videos of eight plenary sessions from 2016: http://soilnotoilcoalition.org/section/videos/