Home > Events > Oil Trains: How to stay informed and be active 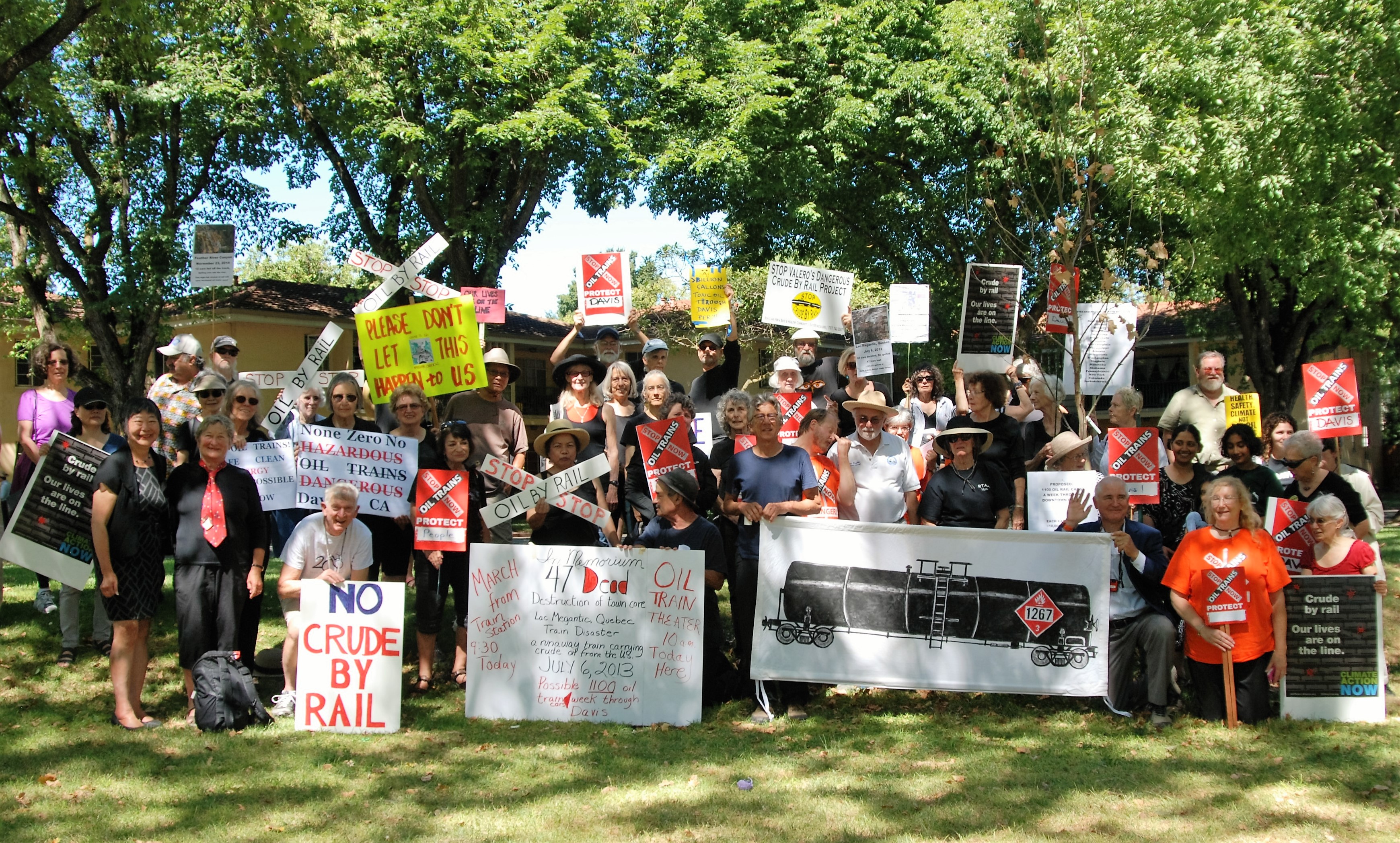 Oil Trains: How to stay informed and be active

Concerned about Oil Trains passing through Davis?  Here are tips on ways to keep up-to-date on new developments.  The latest move by Valero takes the issue of federal preemption to the Surface Transportation Board in Washington D.C. and includes not only the Valero proposal in Benicia but the Phillips 66 project in San Luis Obispo and other west coast projects.  To be actively involved, you must stay informed.

A group of Davisites gathered on July 9th at the train station with signs urging a stop to the transportation of crude oil by rail.  They marched through the blast zone (the area within a half mile of the tracks) carrying a banner of an oil tank car that holds 30,000 gallons of toxic crude oil that can explode or spill into waterways if the tank is breached. Their signs read:  “No Crude by Rail”   “Our lives are on the Line”  “Stop Valero’s Dangerous Crude by Rail Project” “No More Train Disasters.”

“This Land is Your Land” with new verses

Protesters dressed in black as befitted the solemnity of a day to remember the 47 people in Lac Megantic, Quebec,  who lost their lives when an oil train exploded in their downtown.  They rallied at the Rotary Stage, where Jean Jackman led new verses on the danger of oil trains to “This Land is Your Land”  with guitar support from Phil Summers.  Note the words at the end of this article.

Supervisor Don Saylor spoke of the latest developments with the Valero proposal to bring 100 tank cars of crude oil to its Benicia Refinery daily.

Supervisor Don Saylor provided an update to the ever-changing oil train story of the last three years.  Briefly, when the Benicia Planning Commission voted not to ratify the final EIR and not to certify the Valero proposal in February 2016, Valero appealed the decision to the Benicia City Council.  The Council quickly completed public hearings and reached a different conclusion, with 2 votes accepting the reality of federal preemption of the railroads and therefore voting to deny the project, and three votes most likely in favor of the project.  Valero introduced a surprise new element which the city accepted.  Valero has now petitioned the Surface Transportation Board in Washington D.C. for a ruling on federal preemption, and they included all the west coast projects.

Finally, a group of oil train protesters performed an oil train theater piece drawing directly on voices from the near-disaster in Mosier, Oregon just a month before the rally.    Nine people who have written letters and given testimony for the last three years played parts in the play which drew audience applause at times.  Read the script with photographs here.

So, what can a concerned citizen do?

This may turn into a major case that could end up at the Supreme Court.

The Fire Chief of Mosier (Phil Summers) pledged to stop “insane” oil trains in the legislature. Photo by Judy Moores.

Make a Personal Pledge to a Renewable Future

I pledge to do my part to shift away from the use of fossil fuel to clean, renewable energy whenever possible.  I have checked the practices I intend to follow and post this pledge where I will see it often.

_____I will bicycle or walk for errands within a 3 mile radius, thus eliminating driving short distances.

_____I will make my next car purchase electric.

_____I will make my next car purchase a plug-in electric, and I will keep it charged for electric in-town driving.

_____I will attend Davis events on foot, by bicycle, by bus, or in a carpool to reduce my carbon footprint.

_____I will add rooftop solar to charge my electric car and/or to provide my electricity.

Save Us from Oil Trains

New Verses to This Land is Your Land