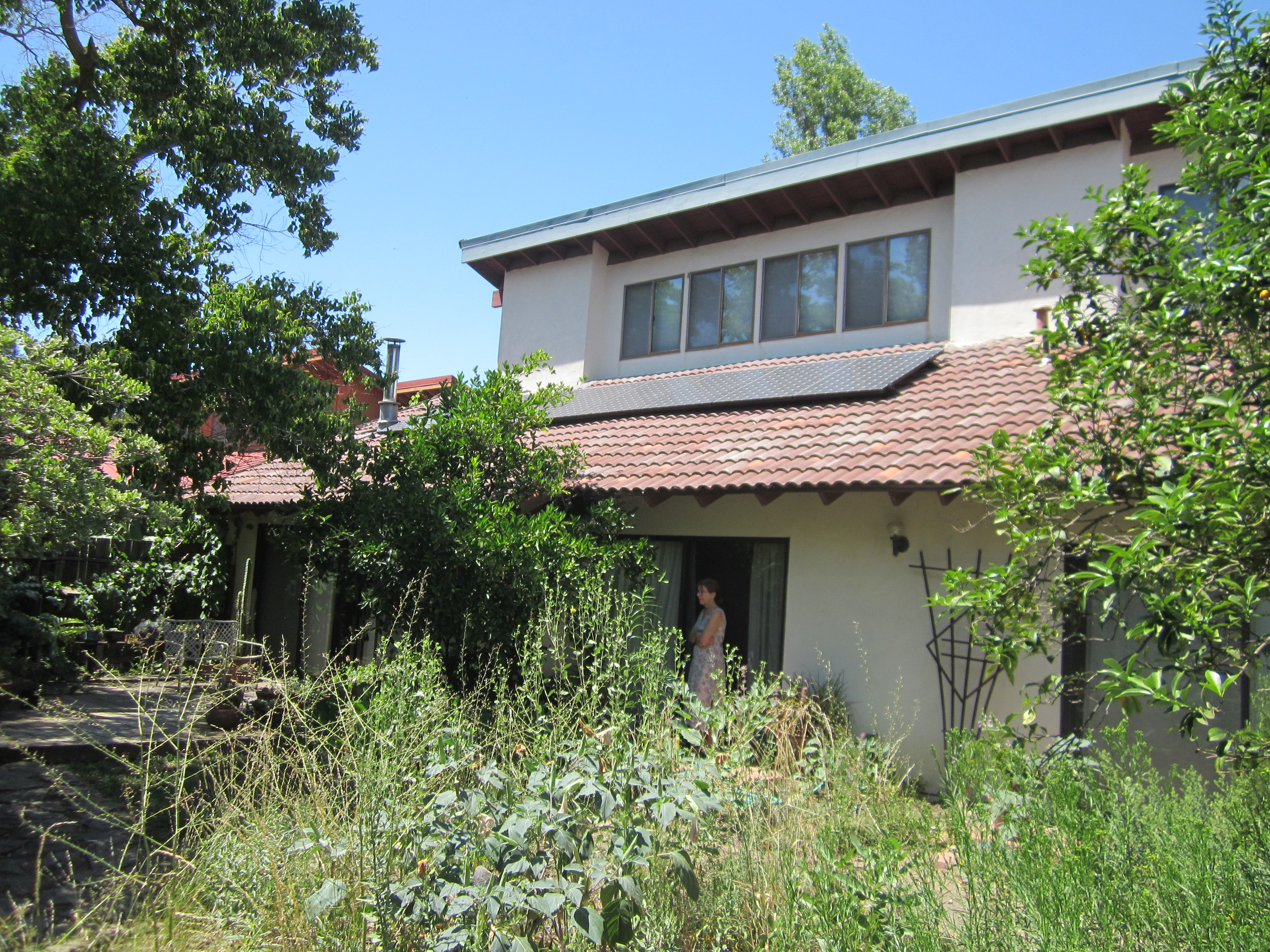 Craig Thomsen and Paula Samuelsen looked into the feasibility of installing solar panels when they originally purchased their home in 1988, but at that time it was simply too expensive for their budget.

Finally, costs reached a tipping point sometime in 2014, and they were able to put a top notch solar electric system on their roof.

Craig and Paula live in a modest, comfortable home in West Davis surrounded by attractive and interesting gardens. They had been looking for ways to reduce the environmental impact of their electric power even before they moved in — as far back as the 70’s. “We were impressed with innovations. The idea of getting power provided by the sun was cool.”

Finally around 2014 or 2015, the cost had come down enough and the quality and efficiency of systems were high enough that going solar made good economic and environmental sense.

Motivated by the local movement

Paula stated she also “liked the idea of a movement, an increasing national consciousness. The fact it is in the national agenda and that there is a local movement we could join was a motivation. Our individual contribution is not going to have a lot of impact; but, if we all step it up, there may be a chance to reduce the worst impacts of climate change.”

Craig added, “It is, in a way, a moral issue if you look at the negative impacts of extraction, processing, and combustion of fossil fuels on communities, watersheds, and our global climate.”

Started with a home assessment

Craig and Paula began with whole home assessment by a local company, EcoAssistant, that gave them ideas on how they could make further improvements on home energy conservation and as well as the benefits of installing photovoltaics. There are a few local companies that provide similar services and they recommend getting such an audit as a first step.

Shopped around for a contractor they could work with

After contacting four solar dealers, they signed a contract with a local solar contractor, SunMetrics, to design and install their solar electric system.

“SunMetrics proved to be excellent. Their people were good communicators. They showed up when they said they would and were very professional,” the two reported.

Paula and Craig’s experiences with contractors they contacted prior to SunMetrics were not positive.

Several contractors simply did not call them back. One came, gave them an estimate and then did not return calls. The couple advises shopping around, getting multiple bids, and persisting until you find a contractor you want to work with.

Top of the line components

Paula and Craig’s system was installed July of 2015 anchored by eight Sunpower panels, which are considered by many to be the best available. They produce the most power for a given area of any in the industry and degrade more slowly than others.

All panels slowly lose generating capacity over time; on average about .5% per year or 20% in 25 years. Sunpower panels reportedly lose only about 12% of their capacity in that time.

The eight panels are designed to produce 2.62 kW an hour at midday. In the morning and evening, when the sun is not hitting the panels directly, they will produce less. Solar panels are rated by the number of kilowatts (kW) they can produce in an hour (1 kilowatt is 1,000 watts).

The system was estimated to produce at least 12 kW hours of power on a sunny day or 4386 kW hours in the course of a year.

That is about 1,000 kW hours more than the family has historically used annually.

At this point, however, it looks like the system could fall short of the promised amount by about 1,000 kW hours at the end of the first year. In response, SunMetrics has indicated that it will modify the system at no cost even if it requires adding panels to meet the projected output.

SunMetrics warrants the entire system for 25 years. It also warrants the roof penetrations (to install the panel mounts) against leaks for 10 years.

Another option was to finance the system to make the payment more manageable. If they had used a real estate backed loan, the interest on the payments might have been tax deductible.

Craig and Paula calculated that this kind of arrangement would have paid for itself in 10 to 15 years.

With their new solar system in place, Paula and Craig are saving money every month.

In May, their electric bill was zero.

They have also begun to use more electric space heaters in the winter to save on gas and recently switched to an electric dryer.