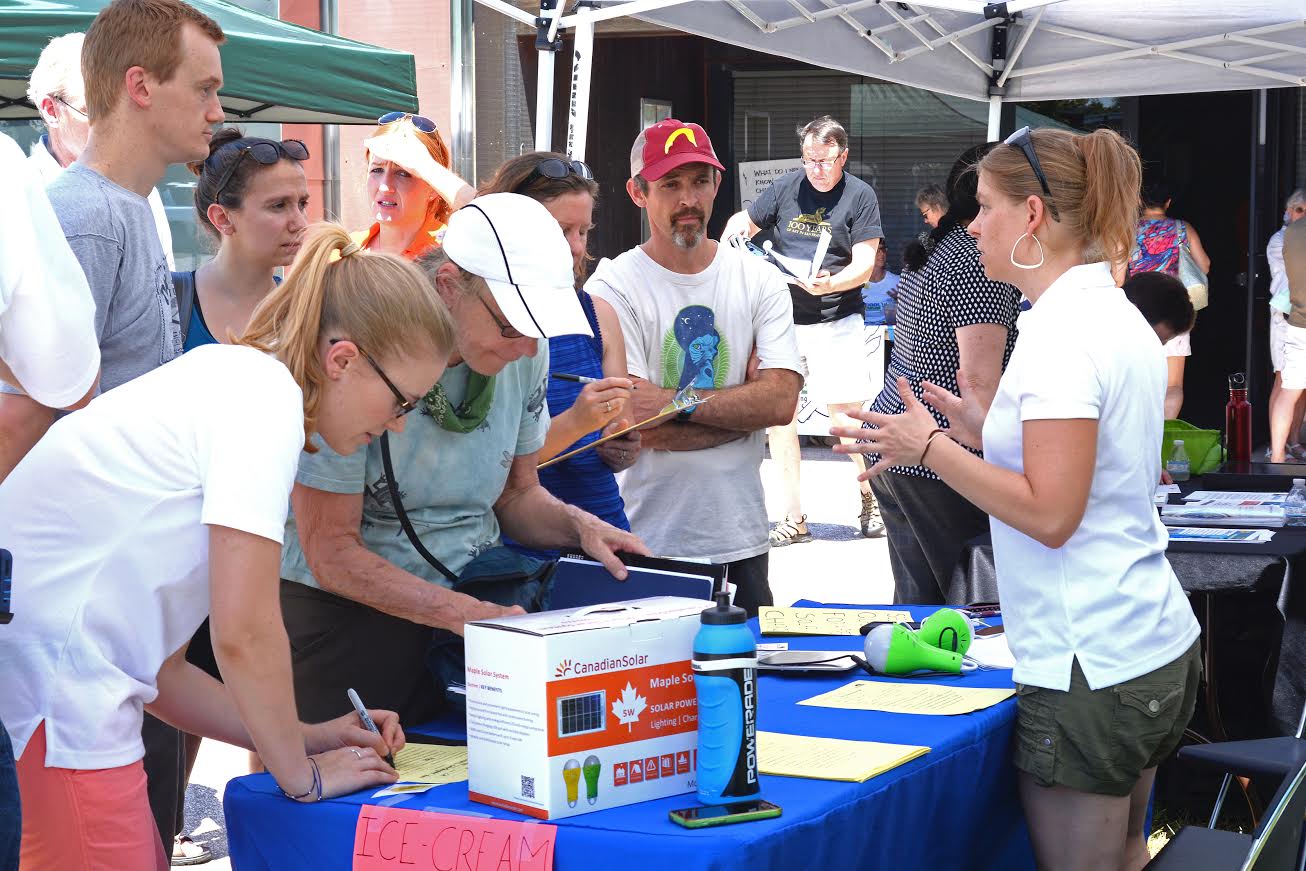 What does a carbon neutral Davis look like? One thing is certain: there will be solar panels on the rooftops!

Cool Davis, in close partnership with the City of Davis, launched a community wide campaign to encourage single family homeowners to “Double Up on Solar” at a widely attended solar fair and documentary screening this past SUNday, June 5, 2016.

Power pioneers: Double up by pledging to encourage and support your neighbors and friends in their quest to go solar: www.cooldavis.org/solar/

These goals, if achieved, represent a significant portion of our overall efforts toward carbon neutrality by 2050. The launch comes on the heels of new PG&E data showing that 20 percent of community energy is currently produced locally from solar photovoltaic installations — 15 percent more than the goal set by the 2010 Davis Climate Action and Adaptation Plan.

Cool Davis is also setting a short term goal of 500 solar installations by the end of 2016.

As of March of this year, 123 permits had already been issued—right on target to reach that goal.

Cool Davis is also encouraging single family homeowners and property owners to pledge their intention to go solar sometime between now and 2020 via a new action web page: www.cooldavis.org/solar/. Pledge contact information will be used to gauge enthusiasm for the movement and the goals and to provide more information to help bring community intentions to fruition.

The pledge also includes “power pioneers” – residents who already have solar – to spread the word to neighbors and friends. Even folks who cannot install solar for any number of reasons can still pledge to get the word out.

Coming soon is a contractor selection tool that will provide residents with a profile of information about solar providers as well as tips and tricks to aid in decision making.

The solar fair showcased solar consultants and service providers, workshops on the basics, finance reps, and an expert panel. The solar fair was a prime example of the kind of innovative collaboration between civic, non-profit, and commercial entities needed to solve our pressing environmental issues and advance a green collar economy here in town, a theme touched on in depth in the documentary “Catching the Sun,” which was shown in the theater during the fair.

The documentary told the story of how the solar movement has been catalyzed in California, particularly in nearby Richmond, Chevron headquarters, across the country by groups like the Green Tea Party, and as far away as China.

Five solar contractors and one financing representative as well as Davis’s own Cool Cuisine and the Davis Solar Cookers attracted a crowd of more than 150.

A workshop on solar hot water presented by Jonathan Gemma of Aztec Solar and another titled “Solar 101 and Electric Vehicles” presented by John Walters of RepowerYolo were well attended and well received.

Walter reported that participants said what they enjoyed about the fair was “not being pressure sold. . .  It was a refreshing opportunity to get non-biased information going from table to table.”

Yolo County Supervisor Don Saylor kicked off the screening by announcing to the assembled crowd of about 120 in the Vets Memorial Theater that the County of Yolo will join the City in the exploratory process of developing a community choice energy joint powers authority.

Next, Mayor Pro Tem Robb Davis announced the new solar installation goals to the crowd, which were agreed to and passed unanimously by council last Tuesday, May 31, 2016. Davis noted that our community is currently running on 20 percent locally produced solar.

At the end of his remarks, Davis asked the power pioneers in the crowd – residents who already have solar – to stand up and receive a round of applause for their role as trailblazers in the community.

The sun and heat were relentless, but a festive atmosphere was fueled by ice cream and fruit pops and the debut of “El Rayito Bonito” or just plain “Ray” – Cool Davis’s newest mascot donned by local second grade teacher Eva Dopico.

Both were panelists at the solar fair plus our own Chris Granger, Executive Director of Cool Davis. The panel fielded questions about rooftop solar and the outlook for community choice energy including how residents could invest in the system.

In anticipation of community interest in the topic, Sears wrote “program and rate design flexibility with a community choice energy program offers the ability for local rate payers who cannot install solar to participate in solar programs” and that an “opt up” rate option would cost more but could “support the development of additional solar projects” and “be designed to improve rate stability.”

He also mentioned that both “Marin Clean Power and Sonoma Clean Power offer incentives to promote expansion of rooftop solar . . . and the financial model . . . found that rates were still competitive with or better than PG&E.”

Sears added that “cars fueled by the sun is critically important to achieving our greenhouse gas goals . . . matching a plug-in vehicle with rooftop solar is an elegant solution that needs to be pursued.”

Cool Davis encourages residents to get involved with the campaign by pledging, supporting our efforts with donations, or by volunteering to build and maintain the momentum we need to help create a resilient and livable community founded on energy independence.

What will Davis look like in 2050? Let’s write that story together.

Double Up to Cool Down Davis!

Power pioneers: Double up by encouraging your neighbors and friends to go solar: www.cooldavis.org/solar/.

For more information about the campaign or to volunteer, email info@cooldavis.org.

To tell us your solar story, email newseditor@cooldavis.org.

To support our efforts, make a donation at our Donate page. 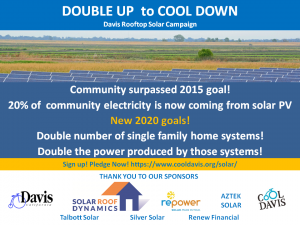