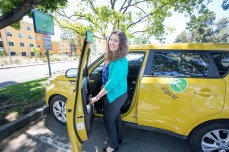 Cross posted from the Davis Enterprise

Leslie Manceba, who works at UC Davis Transportation Services, takes the bus to work every day.

But what if she needs to run a quick errand on her lunch hour? Or rush out for a doctor’s appointment? Her solution is Zipcar — the world’s largest car-sharing service.
In 2000, Antje Danielson and Robin Chase founded Zipcar, inspired by Swiss car-sharing company Mobility Cooperative. They wanted to create a company with an environmental conscience — and to find a way to cut down on single-owner cars.

Fast-forward to 2009 and Zipcars arrived in Davis, offering another easily accessible transport option to people who want to go car-free. There are now 13 Zipcar stations in and around Davis, including on the UC Davis campus.

Zipcar wouldn’t release local numbers to The Enterprise, but as of June 2015, the company had more than 900,000 members and offered nearly 10,000 vehicles throughout the United States, Canada, the United Kingdom, Spain, France, Austria and Turkey.

Brian Abbanat, from the city of Davis Transportation Division, thinks Zipcar is perfect for a community like Davis: “This type of mobility option works well with transient populations, student lifestyles and less car-intense lifestyles.” When Zipcars were first brought to the city, they were purposely located near apartment complexes with dense populations and often high numbers of students.

However, there is now an ambition to move into more family-oriented residential areas, with a hope that Zipcars will give families an opportunity for easy access to cars without having to own one.

One of the main advantages of Zipcar is the shedding of a lot of the hassle that comes with car rental. Cars can be rented on a daily or hourly basis, something not usually available with other car rental services. There’s no paperwork and very little human interaction.

Here’s the basic premise of the service: Anyone 21 or older, or 18 or older if a UCD student, with a valid driver’s license, can start by signing up for an annual membership and be issued a Zipcard. Members reserve a car using the Zipcar phone app or the website, and then go to one of the stations and unlock their car by holding their Zipcard against a card reader in the windshield.

Insurance, as well as 180 miles of gas a day, is included in the cost. Plus, members can easily add drivers to their account, albeit for an extra fee.

Alternatively, there is the monthly option of $7, where the same hourly rates apply. It’s a little more costly in the long run but avoids having to pay a lump sum. Zipcar also offers attractive discounts for students and faculty of UCD, who can get an annual plan for just $25.

Since UCD does not allow students who live on campus to purchase parking permits, Zipcar offers a competitive alternative. In fact, according to Manceba from the UCD Transportation Services, “the most prominent portion of people using Zipcars are campus residents and employees.”