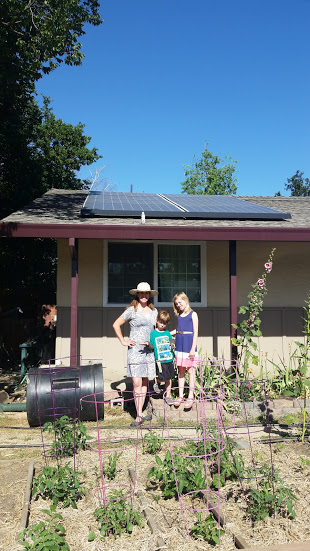 As a resident of Davis you regularly ride your bike to work or school, shop at the local farmers market, and reduce your shower time – all in an effort to ameliorate the effects of global warming. But with summer approaching, temperatures are going to rise, and in a desperate search to cool off, you will find the need to run your air conditioner.

Motivated by her interest in clean energy, a desire to reduce her emission of greenhouse gases, and to be cool and comfortable, Davis resident Chrissy Backman installed rooftop solar panels on her home last August.

Davis has an average of 267 days of sunshine per year making it the perfect place to benefit from solar energy. Installing rooftop solar panels allows you to reduce your carbon footprint without compromising comfort while also saving you hard-earned money.

The Backman family contracted with SolarCity, to handle the design, finance, and installation of the panels. SolarCity was originally founded by Elon Musk, the current CEO of Tesla Motors.

“Solar City’s big benefit is zero down, so I was able to get the system without it being a big financial burden, and my monthly bill to [SolarCity] is less than my PG&E bill was,” Backman said.

Backman financed her solar panel installation to 20 years and at the end of 2015 received a 30 percent tax rebate. Financing requires a credit check and the interest rate depends on the balance.

The system cost her just under $16,000 and the 30 percent tax rebate returned about $5,000 back. Backman used the money to pay back part of her balance to SolarCity, bringing it down to $11,000, while also decreasing her interest rate.

Backman explained that SolarCity calculated the size of her 4.5 kilowatt system to match the amount of energy she uses throughout the year.

“It looks like it’s going to be sufficient to offset my energy so I will not have to borrow much from PG&E by the end of the year,” Backman said.

In addition to her gas charges, Backman pays PG&E a $10 connection fee that allows her to access energy when her panels aren’t producing, which usually occurs at night or during the winter months.

“I did a side by side comparison and I still paid so much less. Normally in the winter I paid almost $200 for my PG&E bill and this past year I paid $130.

Backman explains that the month of December is a high energy usage month in her house because she uses energy for Christmas decorations, heating, and increased cooking.

“In December I would get into the third tier and this year I never got into that tier. By having the solar, it kept me into that first tier even though I was using a lot from PG&E,” Backman added.

“In December I would get into the third tier and this year I never got into that tier. By having the solar, it kept me into that first tier even though I was using a lot from PG&E,” Backman added.

Once she pays off her balance to SolarCity, Backman expects to only pay the gas charges and the connection fee each month. As long as she doesn’t drastically increase her energy use, she predicts that by the end of the year she will not owe PG&E any money for energy.

Having solar panels has allowed her to use more energy without worrying about the bill and the emission of greenhouse gases.

“I did right away get a deep freezer, that was like another thing that I’ve always wanted,” Backman said.  “I didn’t want to plug it in but now I can,” she added.

Over the last year three of her neighbors have installed solar panels.

“We have such a good environment for it. We’re in sunny California…I think it’s a really good investment and especially if you can actually pay less per month for utilities,” Backman said.

Christine Backman has a Bachelor of Arts degree in Environmental Engineering and worked as a building energy analyst at Davis Energy Group. She is also an urban farmer and participated in the recent effort to convert lawns to drought tolerant food production for low income residents. Chrissy is a proud East Davis resident in the Birch Lane area.