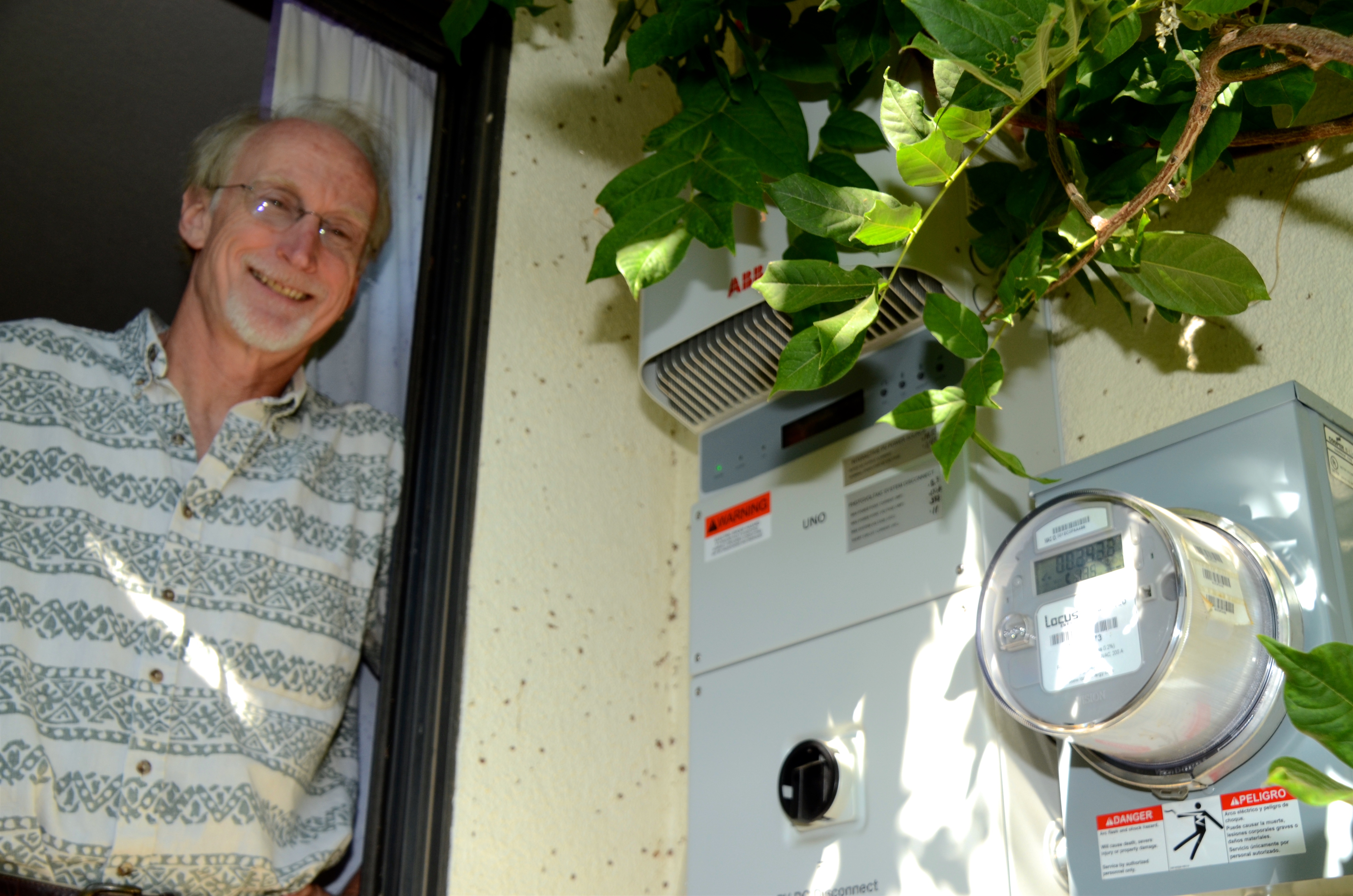 Steve Wheeler, Mimi Kusch, and their daughter Maddy installed a solar array on the roof of their West Davis home in November of 2015 and haven’t looked back since. In fact, they have big plans for the future thanks to their new solar system.

While the family’s primary motivation for going solar was to reduce their carbon footprint and not necessarily to save money, they are on route to do that as well.

“Climate change is far and away the most important issue of our times,” says Steve. “We want to walk the walk. We want to use very little water and as little energy as possible. . . . Efficiency is always the beginning point.”

Even transportation is part of the family’s solar picture, Steve reports. “We would like a car with a couple of hundred miles range. The idea is to be self-sufficient with the house and the car from the solar on the roof. “

The Start of a Net Zero Journey

Installing solar panels was the first step in the family’s journey to zero net energy. In the future, they intend to switch their gas furnace for a heat exchanger that will run entirely on electricity they generate warming the house in the winter and cooling it in the summer.

They also plan to switch to an electric stove, install solar water heating, and, within a few years, purchase an electric car with a 200 mile range allowing them to travel to the Bay Area and back on a single charge. They have also switched all of their light bulbs to LED and purchased the most energy efficient refrigerator they could find for normal home use.

Installing solar panels was the first step in the family’s journey to zero net energy. In the future, they intend to switch their gas furnace for a heat exchanger that will run entirely on electricity they generate warming the house in the winter and cooling it in the summer.

The family’s average electrical energy use was a very modest 5 kilowatts (kW) per day before the solar system was installed. The roof top solar system began producing more power than the family was using on a daily basis in February and since then has been feeding the grid with the excess.

If the system has produced more power than the family used at the end of the year, PG&E will pay them for the excess at 4 cents per kilowatt hour.

Because of the family’s already modest electrical use, the solar array they installed is a relatively small 2.25 kW. Steve found this to be the most frustrating part of a process that was otherwise quite simple.

“We had to argue to get the size of the system we have. PG&E will only approve a system that is expected to generate 130 percent of historical usage. I don’t know what gives them that authority. I spent a fair amount of time communicating with the Public Utilities Commission to try to find out why PG&E has approval authority and could never get a straight answer.”

The family had hoped to install a larger system to allow for expansion to an electric car in the future and to contribute more clean energy to the grid.

The solution was to plan the system to add a few panels once they purchase an electric car.

The family purchased their solar system through Sungevity. The price was competitive with other quotes they received and they felt the company was committed to promoting solar energy.

As an added bonus, their purchase resulted in a contribution from Sungevity to the Sierra Club which the family also supports. The total price for the system installed was $9500. With a 30 percent tax credit from the federal government, the total out of pocket expense was $6,800.

Given the relatively small size of the system, an outright purchase rather than a lease was the most practical option.

Sungevity provided the family a 20 year warranty on all parts of the system including warranting against leakage at the roof penetrations needed to mount the panels.

If the system does not produce the amount of power it is designed to, Sungevity will pay the family for the difference at 4 cents per kilowatt hour.

Given the relatively small size of the system, an outright purchase rather than a lease was the most practical option.

The family went with Trina brand panels and an ABB inverter. The inverter is the device that changes the direct current power produced by the panels into the alternating current used by appliances and lights. It is also how power is sent to the grid when the panels are producing more than is being used by the home.

Steve Wheeler is a professor of Landscape Architecture and Environmental Design in the Department of Human Ecology at UCD. Among other awards and accomplishments, he and his family are longtime Village Homes residents.