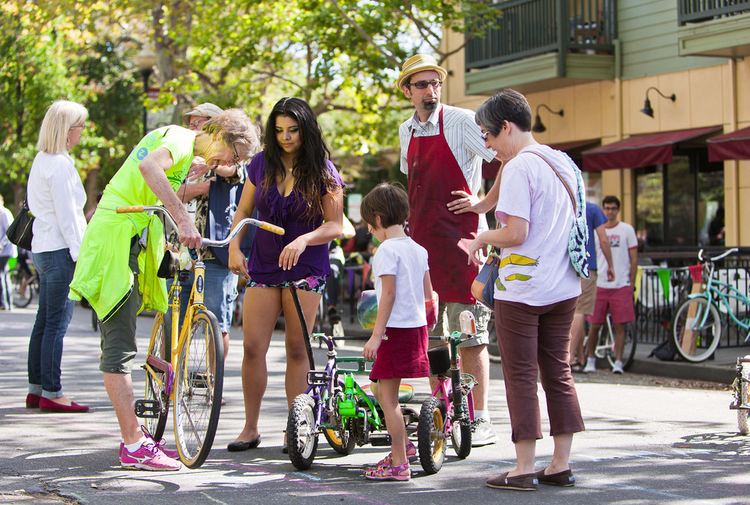 Davis Bicycles! On the Move

Congratulations to Davis Bicycles! the winner of the Cool Davis Climate Solutions Transportation Award for 2016.

About 10 years ago, a small group of like-minded residents got together to address a local issue. Bike riding as a mode of transportation had dropped from 30 to 15 percent.

The group decided to focus on improving the infrastructure to make bike riding safer and achieve the League of American Bicyclists’ designation as a  “Bicycle Friendly Community.  They achieved their goals, and thus began Davis Bicycles!

Their first major community-wide project was to create the 12-mile Davis Bike Loop.  They painted markers on the street and marked the route on a map.

The project was so well-received that the city of Davis eventually adopted the Bike Loop, and now maintains the painted markers on the streets.  In 2009, they created a Schools Committee, which developed the Safe Routes project.

Since its inception, Davis Bicycles! has carried out a number of other programs to help people ride their bikes.  They have partnered with schools and neighborhood organizations interested in climate and health issues, promoted keeping bike lanes clear and safe, and organized bicycle classes and workshops.

Davis Bicycles! aims at making bike riding safe and accessible. Trish Price, president of the local organization says that their philosophy is, “If cities are built for people, then people will want to go there.”

You can sign up at davisbicycles.org to receive calls for action and opportunities to help out with bike-to-work events. According to Price, “We want people to get out there and have fun on their bikes.”

Each year Cool Davis recognizes individual Davis residents as Eco Heroes. The winners are residents who model how to incorporate sustainable practices into their work, civic, and everyday lives. Acting out of personal conviction, they do “the right thing” for themselves, our community, and our planet.

In its efforts to work with our community on carbon reduction and sustainability, Cool Davis awards focus on Energy, Transportation, and Consumption.