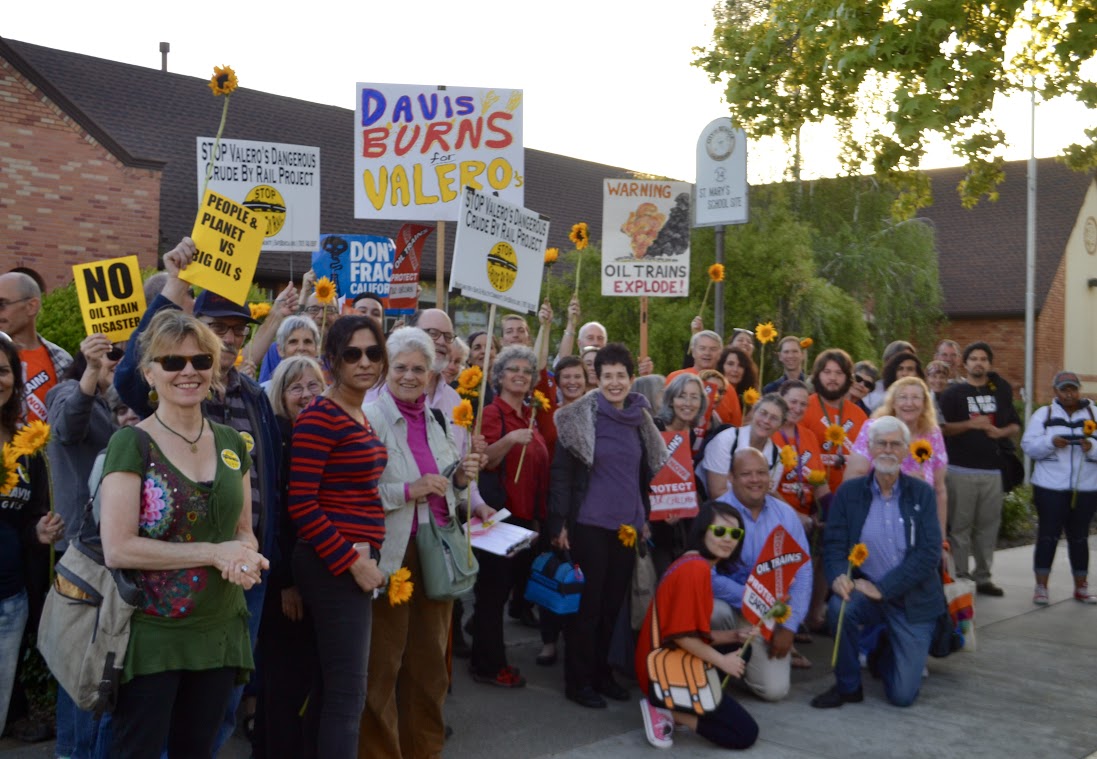 Davis was well-represented at the Benicia City Council hearing for the Valero Crude-by-Rail Project this Monday evening.  Of the approximately 48 people who spoke, 12 came from Davis or Dixon, and another 6 came from Sacramento.  Other locals were scattered in the audience waiting for their names to be called to testify.

The speakers voiced their opposition to the oil company’s proposal to accept 100 rail cars daily full of North American crude oil on a route that comes directly through downtown Davis.

The hearing continues with more public testimony on Wednesday, April 6th, and two more dates are reserved on April 18th and 19th at the City Chambers in Benica.

The evening began with a rally called by the Benicians for a Safe and Healthy Community an hour before the hearing and counter-balanced by a crowd of Valero workers in uniforms and supporters of the project.  A bus of 23 people from Sacramento stopped to pick up an additional seven in Davis, arriving just as the hearings began.

Officials were allowed to speak first, beginning with Yolo County Supervisor Don Saylor who also represented the Sacramento Area Council of Governments (SACOG).  He traced Yolo County’s  effort over the last three years to communicate the serious safety concerns and to offer possible mitigations, which were acknowledged but not addressed in the various stages of the EIR.  He said 500,000 of the 2.4 million residents in the SACOG area (6 counties of Sutter, Yuba, Placer, Yolo, Sacramento, and El Dorado) live in the blast zone of the railroads, i.e. within a quarter-mile radius of the tracks.  Of those, 260,000 are residents, 200,000 work in the area, and 28,000 are students.

While Valero and its jobs are important, he stressed that this project “requires a shared commitment to protecting public safety.”  He said the project should not be approved unless the safety concerns are resolved.

Next, Matt Jones of the Yolo Solano Air Quality Management District (AQMD) represented all seven Districts who have responded jointly in writing to three versions of the EIR for the Valero Crude-by-Rail Project. He contended the EIR documents the impacts correctly, but fails to offer or respond to any mitigations, even when the Sacramento Metropolitan AQMD offered staff time to work out an off-site mitigation plan.  Jones reminded the Benicia council that San Luis Obispo County is examining a similar crude-by-rail proposal, and Phillips 66 has voluntarily offered such off-site mitigations.

Eric Lee, a City of Davis Planner, made a plea for the City Council to uphold the decision of their Planning Commission who voted on February 11 not to certiy the final Environmental impact report and denied Valero’s permit.  After submitting written comments three times and offering constructive suggestions to address some of the issues raised, no mitigations or reasons for the lack of them, was offered.  He added that Davis believes that legally the local jurisdictions are not pre-empted by federal rail regulations , that uprail cities  are entitled to have our comments addressed in the EIR and that Benicia has a legal obligation to safeguard the public.

“I continue to be concerned about the Valero Crude-by-Rail Project regarding the significant air quality impact,” wrote Senator Lois Wolk in a letter read at the hearing by her staff, Alex Pader. She recommended specific steps, and if they cannot be met, then the project should not move forward.  She reminded the city council members that her own obligation is to protect the public from harm which she has done with two pieces of legislation on oil train safely, and that their obligation to safeguard the public is no less.

Marilyn Bardet, spokesperson for Benicians for a Safe and Healthy Community, encouraged the City Council to use their ethical judgement, and read all the material from the last years plus what is pouring in now to inform themselves at this crucial juncture in the decision process because the state of California is watching.

She urged them to deny the continuance to get an opinion from the Surface Transportation Board (STB) which could have been requested years ago. (The continuance will take a month for lawyers to prepare and 3-6 months to get a reply, if the CTB decides to issue a response.) Instead, she urged them to uphold the decision of the Planning Commission.  She pointed to a new 69-page letter from Dr. Phylis Fox stating that this project is not sustainable and does not support AB32.

As Marilyn explained that the Valero project is bad for Benicia, bad for the uprail communities, and bad for the planet, other members of the group unrolled 4,081 signatures opposing the project of which 1,204 were signed by Benicians, enough to win any election in town.

The busload from Sacramento and Davis were allowed 15 minutes total, so only eleven of the thirty spoke. “You may make more tax revenue with the project…but at what price?  In Dixon we turned down a proposed race track that would have brought more revenue but also terrible long-term repercussions to our community,” (Jo Ellen, Dixon)   “You have a legal and moral responsibility to protect all of us uprail,” (Chris Brown, Sacramento).

After a break, a mix of voices pro (12) and con (16) spoke for up to five minutes each as the mayor pulled cards.  The speakers were in random order, but to make it easier to follow, they are grouped here those who spoke in favor of Valero’s project, and those who spoke against it.

The first speaker for Valero said, “we have a tremendous thirst for oil; therefore, don’t we have a responsibility to produce it?”

Jasmine Powell, resident of Benicia, said Valero constantly strives to increase revenue as a business should, but never risks its outstanding safety record as indicated by its high OSHA ratings.

Seven other Valero workers and supporters urged granting the continuance to get the STB opinion.  They spoke of their trust for Valero’s high safety standards and their support for the company and the project.  One speaker believes the money from Valero is vital to Benicia.

On the other side, many urged the City Council to uphold the Planning Commission decision, define their legacy, and protect the children. One spoke of serious traffic congestion backing up onto the freeway.  Another addressed the hidden and unacceptable “true costs” all the way back to the source of the crude.  Rick Stierwalt, resident of Benicia, described how seldom rail bridges are inspected and the resulting dangers.

Frances Burke of Davis spoke of the Planning Commission’s work as “epic,” and made an eloquent plea for the uprail communities not to be dismissed as collateral damage.  Furthermore, since fossil fuels are a dinosaur, she urged the City Council not to build the future of Benicia on a dying industry.

Don Mooney , an environmental lawyer form Davis, said he envied them the chance to be a part of changing course.  “We still use gas, but it’s not the direction we’re going. It is a step back, maybe several because crude-by-rail puts people at risk,” he said.  Instead, he urged taking Benicia forward.  He said in his 25 years in environmental law, he had not seen a case with more uniform opposition, where so many have stood up for the same reasons opposing the project.

Catherine Black simply read the list of officials and organizations opposing the project for 5 minutes, naming all seven Air quality Management Districts, all 22 cities and 6 counties who belong to SACOG, all the agencies such as the Office of Spill Prevention and Response right up to the Attorney General who sent letters on this project.

The hearings and deliberations will continue April 18 and April 19 in the Benicia City Chambers.  They are open to the public.

Contact Lynne at lnittler@sbcglobal.net for more information about upcoming hearings on April 18 and 19.  It is not too late to send your own letters to the Benicia City Council. Go to www.yolanoclimateaction.org for details about sending letters.