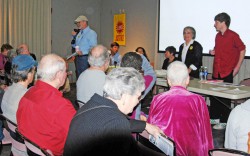 Oil train danger to Davis is averted for now

Reposted from the Davis Enterprise From page B5 | February 14, 2016  By Lynne Nittler and Jean Jackman

It has been an exhausting and dramatic week for Davis activists and those from Sacramento and other cities uprail from the proposed Valero Refinery expansion in Benicia.

Ten of us have traveled from Davis in two carpools to testify on the Valero crude-by-rail project. We have participated actively in the stages of a complicated public review process that began in 2013. Now, a final environmental impact report is up for a last public hearing before the Benicia Planning Commission.

A city of Davis official and a representative of the seven regional Air Quality Management Districts also spoke.

We’ve been here before, and we were met with grateful hugs from our friends in Benicia, though we came to protect our own vulnerable city as much as theirs.

The Valero refinery wants to bring two 50-car trains through Davis daily carrying highly volatile crude oil from North Dakota and other places. That would be 1.5 million gallons daily. It all hinges on whether Valero can get a permit to build a rail loading station.

Fortunately, the California Environmental Quality Act gave our region legal standing, and our governmental agencies and individuals used it fully with letters when the draft EIR failed to include any mention of uprail impacts. The CEQA process protects people and the environment! Without it, the uprail communities like Davis would have had no voice at all. We will defend it fiercely from those who would weaken or dismiss this legal recourse.

The earlier revised draft EIR recognized 11 “significant and unavoidable impacts” uprail but dismissed them all as “impacts without mitigations” by claiming “federal pre-emption” of the railroads.

For the third time, our Davis City Council and Yolo County Board of Supervisors sent letters and urged the Planning Commission not to certify the FEIR. The Sacramento Area Council of Governments, which represents 22 cities and six counties, sent a letter severely critical of the FEIR, calling for the Benicia Planning Commission to “provide full and adequate responses to our comment letters,” and “to fully evaluate all measures to mitigate the significant environmental impacts that this project will inevitably have on our communities and our residents.”

The sticky big issue is the interpretation of federal pre-emption. The contract attorney for Benicia insisted that it is illegal to raise objections to anything regarding the trains because that is all governed by the feds. The Benicia city staff and the contract attorney recommended allowing the refinery to go forward.

Last week, San Luis Obispo county staff demonstrated a different take on the federal pre-emption issue. They recommended denying an expansion of the Phillips 66 Santa Maria Refinery, stating that the benefits were outweighed by safety concerns. The San Luis Obispo Planning Commission will finish listening to testimony (more than 300 people submitted cards to speak), weigh the merits of the project in the light of public sentiment both written and the information provided in the final EIR and vote sometime in March.  Phillips 66 may appeal the County Planning Commission decision to the county Board of Supervisors.

Fortunately, among those who testified in Benicia were two lawyers from Sierra Club, two speakers for the Stanford Law School Center representing the Center for Biological Diversity and two attorneys from Adams Broadwell Attorneys on behalf of SAFER California. All six of them put forward strong cases that the FEIR does not meet CEQA, cannot be certified and that the Benicia staff interpretation of federal pre-emption is not correct.

A recent Washington Post article was titled “Trains are carrying — and spilling — a record amount of oil.” It stated that “more than 141 unintentional releases were reported from railroad tankers in 2014 … a nearly six-fold increase over the average of 25 spills per year during the period from 1975 to 2012, according to records of the federal Pipeline and Hazardous Materials Safety Record.”

Neighbors who witnessed 14 tanker cars derail and explode near Mount Carbon, W. Va., likened the fireball to a scene from the apocalypse. We are all familiar with the grisly Canadian Lac-Mégantic wreck that wiped out the downtown near the Maine border and killed 47 people.

Public comment ended at 11:30 p.m. Wednesday night. The planning commissioners listened politely and attentively to five-minute public comments by more than 70 people, often personal, sometimes brilliant, and all but six opposed to the expansion. They also allowed visual PowerPoints such as the one put together by Davis resident Elizabeth Lasensky, which showed oil cars rolling past hordes of people at Picnic Day, tank cars traveling over the Sacramento River (a drinking water source for many communities) and the path of oil cars through downtown and next to the Mondavi Center.

In Sacramento, 13,000 children attend 17 schools in the blast area — the area vulnerable to an accident. Our California state Capitol is also in the blast zone.

After four nights of deliberation, the Benicia Planning Commission unanimously chose not to certify the final FEIR and denied a project permit. It is likely that Valero will appeal the commission’s decision to the Benicia City Council. For detailed reporting, see www.beniciaindependent.com. Read some of the Davis testimony at www.yolanoclimateaction.org.

We activists let out a big sigh of relief … for now. And we feel immense gratitude to the public service, endurance and respect demonstrated by the volunteer Benicia Planning Commission.