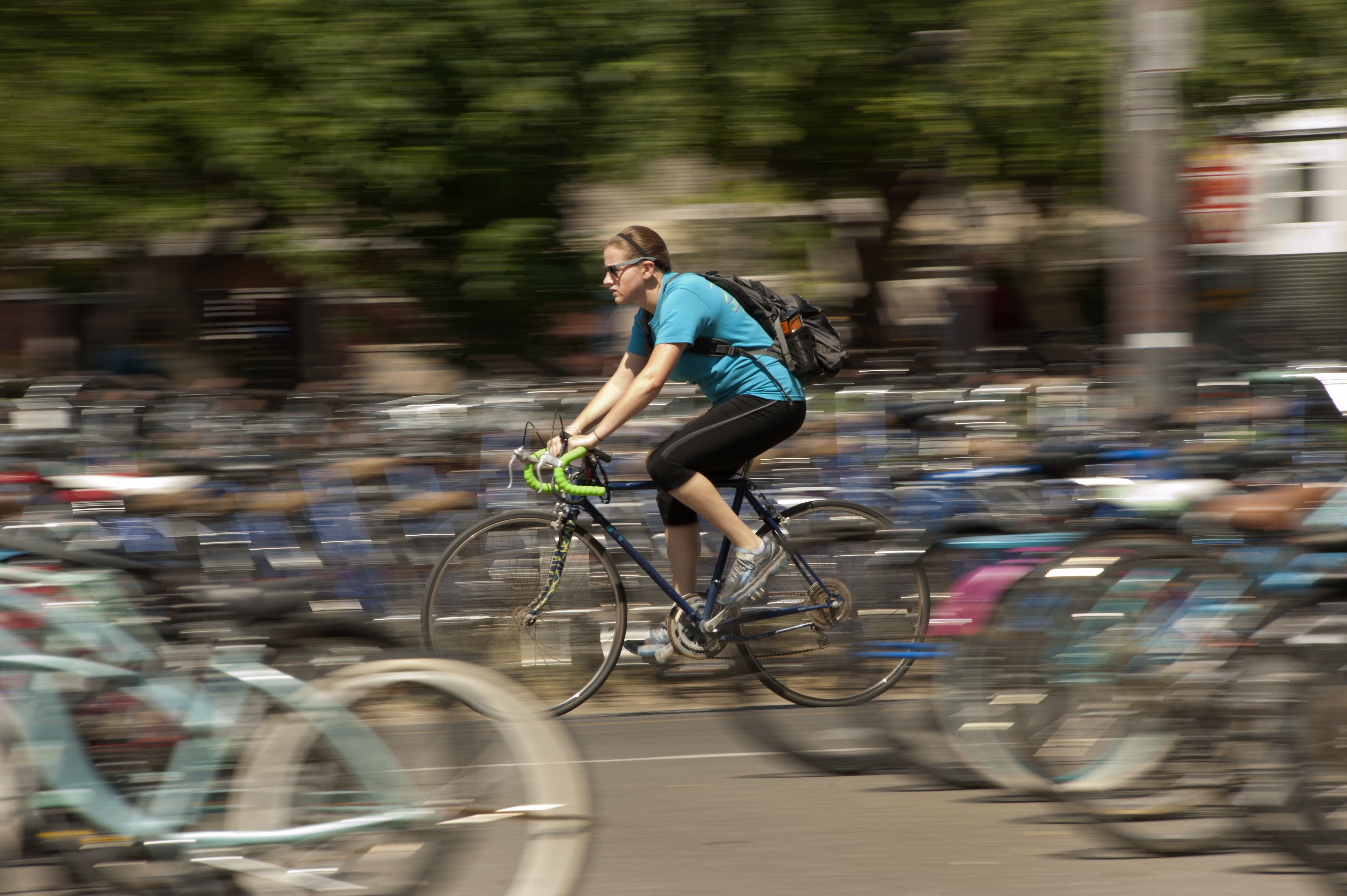 (By Judy Moores) When I asked Leslie Mancebo, whose official title is “transportation demand and marketing coordinator” for UC Davis’ Transportation and Parking Services (TAPS), what she did, she mentioned, “ ‘TDM!”

At my puzzled look, she explained, “TAPS manages a program called the goClub to encourage the use of six main modes: bike, walk, bus, train, car and vanpools. In addition to issuing parking permits, maintaining parking lots, roads, bike paths and walk-ways, putting up signs and installing bike racks, TAPS offers incentives to those who use green transportation modes as well.”

“My job is to oversee the goClub TDM or “transportation demand management,’ which includes lots of education, selling bus passes, and finding ways to reduce the need for additional parking lots now and in the future. We want to keep everyone safe – whether walking, biking or driving, which means educating new students and welcoming everyone into our UCD ‘bike culture’. And we want to be good stewards of the environment, too.”

“With regard to education, we promote biking to new students, do on-road training, and give out bike-lights to everyone who needs one. We have a great on-line video that anyone can watch to learn how to negotiate campus and town safely on a bike (bikesafety.ucdavis.edu).”

When asked about the annual Campus Travel Survey, conducted with the help of the Institute for Transportation Studies, Leslie stated, “The 2013-14 report found that there has been a 9% point increase in the number of bikers on the campus since the first survey in 2007 or 47%. This mode share is the best of all campuses in the country.”

She continued with a hint of pride in her voice, “Last year, TAPS was recognized by the League of American Cyclists with “Platinum” Awards as both a bike friendly business and a bike friendly university. UC Davis is the only campus in the country to be ‘Double’ Platinum!”

Leslie credits TAPS “goClub” (goclub.ucdavis.edu) with UCD’s success. The goClub, open to all UC faculty, staff and students who agree to give up having a single-vehicle parking permit, promotes eco-friendly modes of transportation and offers incentives to its members, such as, two complimentary parking permits each month, emergency rides home, bus and train discounts, drawings for prizes, and a variety of others.

As we finished the interview, Leslie noted that Cool Davis and TAPS share broadly overlapping goals. While Cool Davis focuses on encouraging Davis households to reduce their transportation footprint, many of those same households work or study at UC Davis. She is pleased that TAPS will be a Cool Davis Partner. “There will be many ways that we can work together to reduce the carbon footprint of UC Davis and the city of Davis.”

Way to go, Leslie! Cool Davis is pleased to welcome to TAPS as a new Cool Davis Partner and Coalition member.

Lindsey Terry gives a tour of her electric bicycles from Rad Bikes, a "Rad Wagon" and a "Rad Runner," as part of Davis Driving on Sunshine 2020. Kick your car to the curb! Davis Media Access Davis City Valley Clean Energy ... See MoreSee Less

Lindsey Terry gives a tour of her electric bicycles from Rad Bikes, a "Rad Wagon" and a "Rad Runner," as part of Davis Driving on Sunshine 2020. Kick your c...

The #pandemic has seen a huge surge in #bike sales and Napa Valley is seeing more bikes on the trails than ever before. There is hope that growing support for biking will stick around. Read more in this article by @NapaRegister 🚲 ❗️ 🚲
https://napavalleyregister.com/business/bikes-boom/article_22ba4256-ceb0-5dd4-934a-74793f664e77.html