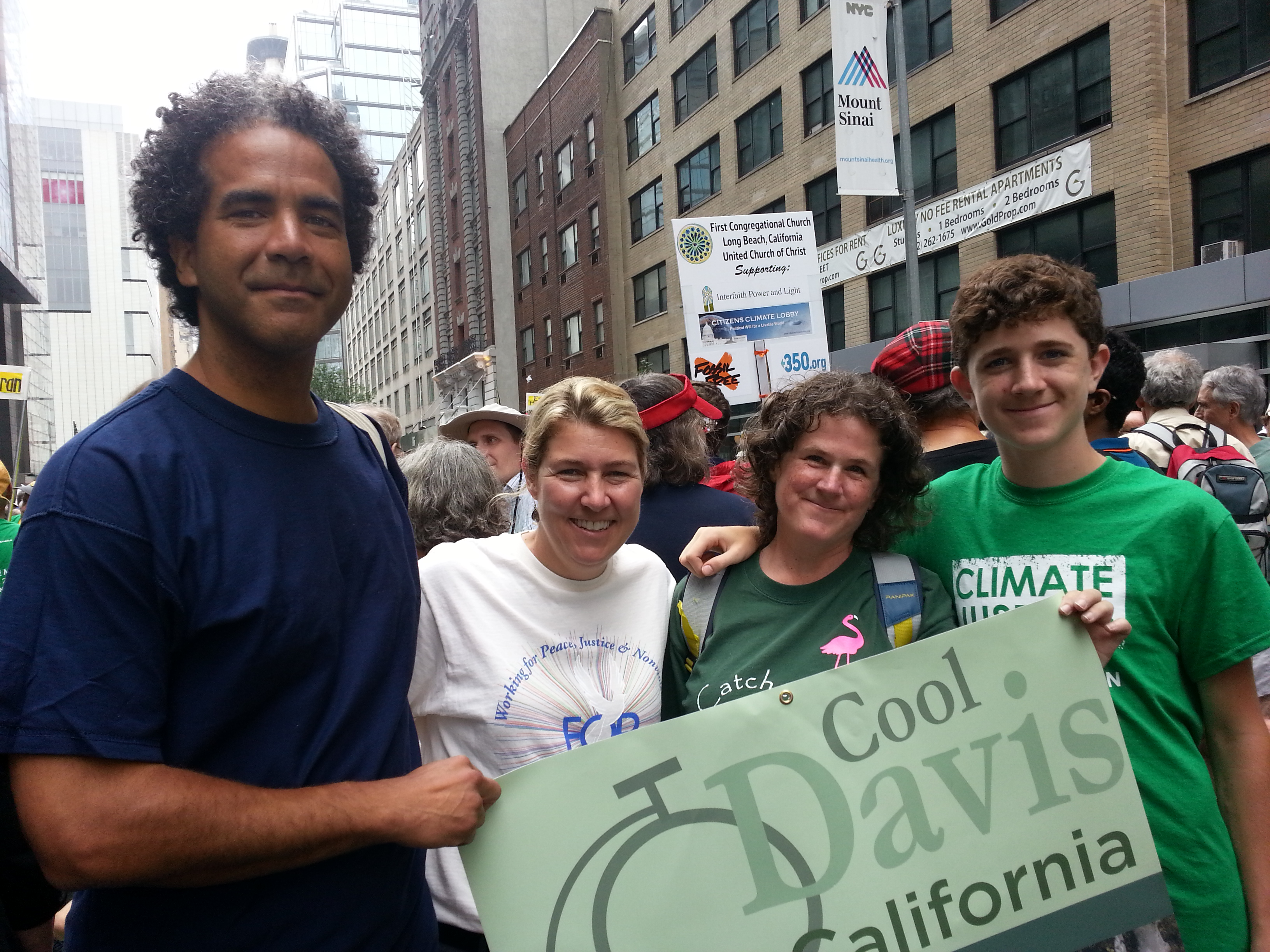 Why We Represented Davis Organizations at People’s Climate March

(By Kristin Heinemeier) My son — Holmes Junior High School student Peter Holderbein — and I have only two heads between us, but on Sept. 21, we were wearing many hats, as we participated in the People’s Climate March in New York City.

We carried the flag for Cool Davis at the march, “boots on the ground,” as it were, for Davis’ community-based nonprofit and its strong commitment to moving the ball forward on climate change locally.

We were also representing our church, Lutheran Church of the Incarnation, and its GreenFaith Action Team, as well as the Lutheran Office of Public Policy-California, an advocacy arm of the Evangelical Lutheran Church in America, created to take positions on social and moral issues, and to share Lutherans’ concerns with policy makers.

And just to round things out, we were also representing the Davis Women Energy Associates: an informal networking group of professional women who work for energy efficiency and renewables, which I (an engineer at the UC Davis Energy Efficiency Center) founded in 2013.

We also could have represented any of a number of other perspectives: scientists and engineers, students, Minecraft and Halo aficionados, single moms against gun violence … not to mention lefties — both in handedness and politics — people with curly hair and cat lovers against the bomb!

“It was like being caught up in a river of humanity”

However, as the march was organized with different “contingents” of marchers — such as labor, indigenous peoples, scientists, LGBTQ, students — we had to choose. So while carrying four different banners alternately, we marched along with the interfaith community, which was well-represented with its own staging area, and about 10,000 marchers joining early for an interfaith prayer service, music and speeches.

As a Christian, I feel that nature is God’s gift to us and it’s beautiful! We cannot continue to treat it like our own personal ashtray. In fact, LCI has a Green Mission Statement that says, “Sharing Christ’s Light daily, we love and care for God’s creation. Through prayer, reflection, action and advocacy, we strive to honor our interdependence with all of nature and grow our compassion for the Earth and all that dwell within it.”

In line with LCI’s mission to honor the Earth, the Rev. Daniel Smith and the congregation of LCI gave Peter and me a ritual of blessing as they sent us off to New York!

“We are done waiting. Deal with climate change now!”

We had trouble figuring out how to wear so many different hats at the same time, and visibly convey their different messages. But I suppose each of us represents our own unique collection of perspectives. At least for me, the message from all of these perspectives is the same: “We are done waiting. Deal with climate change now!”

I wanted to be part of the People’s Climate March because I am growing more and more alarmed at the likely impacts of climate change, and the inability of our society to pull up its socks and do something about it. At some point everyone needs to put their feet where their mouth is and say “No more!”

Although I liken the experience to being caught up in a “river of humanity,” I was glad that there was a massive turnout, and I hope that the sheer volume and energy of the march will communicate to the United Nations Climate Summit delegates the humanity and the power of this movement.

For me, the key message of the march comes from the great philosopher and environmentalist Dr. Seuss, from “Horton Hears a Who”: “We are here, We Are Here, WE ARE HERE!” I hope the U.N. delegates will finally hear us, and will be too embarrassed to take lukewarm action with the whole world watching, and will be inspired to stick their necks out. I hope President Obama feels that we have his back in taking a strong position and making a difference in the future of the planet.

It’s not enough to simply think good thoughts, or even do good acts. Sometimes you have to get on your feet and make some noise.

The importance of including youth in the movement should not be underestimated, and early experiences with advocacy can have a lasting effect. I started on my own path of activism by walking the precinct with my mother in Detroit, to canvass for George McGovern’s campaign for president.

I remember that vividly and I got the message that it’s not enough to simply think good thoughts, or even do good acts. Sometimes you have to get on your feet and make some noise.

Since then, having lived in Berkeley (where people protest at the drop of a hat!), I’ve been involved in quite a few protests from reproductive rights, to no nukes, to no war. But none of them have given me the same sense of urgency as this march, so I think I shouted even louder at this one.

Peter noted that “as a teenager, young people have a lot more voice than we think, and we should be more involved in decision-making.” He added that if Obama and the world leaders assembled for the climate summit had experienced the march from the streets, like he did, there’s no way they could turn their backs on this crisis.

While I wanted to explain to him that unfortunately, it’s usually way more complicated than that, I decided that … maybe he’s right! If it would move just one key decision-maker, it could make a big difference.

Continuing to advocate for the planet through activities such as volunteering at the Cool Davis Festival in October, spearheading GreenFaith activities at LCI, and participating in the planning of the Climate Conference sponsored by the Interfaith Alliance for Climate Justice and hosted by LCI next spring, neither Peter nor I have any intention of keeping quiet now.

— Kristin Heinemeier, a Davis resident, is a principal engineer with the Western Cooling Efficiency Center at UC Davis.