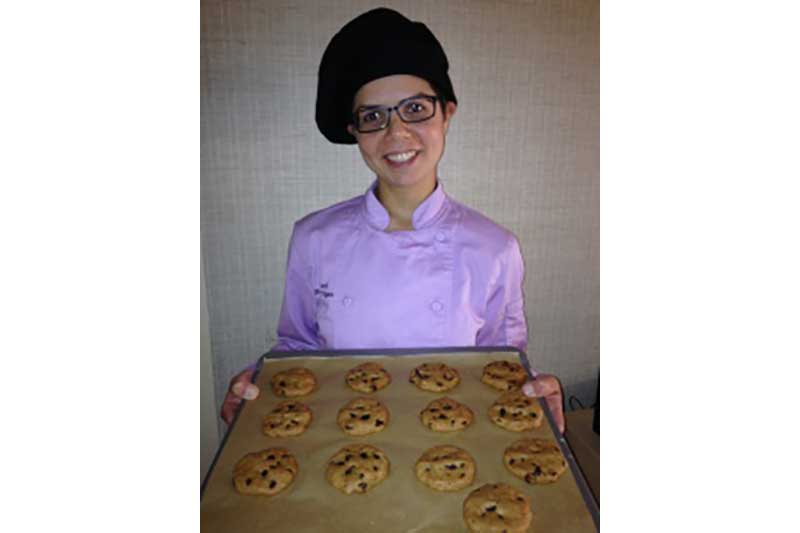 Parvaneh, whose Persian name translates to “butterfly,” is on a sweet mission to introduce Davis to vegan desserts that are both delicious and healthy. She started her business less than a year ago, and is delighted that it is growing and receiving positive feedback from happy customers. Looking ahead to the future, she hopes one day to have her own vegan café in Davis. But for now, she is looking for additional local venues to carry her products.

“So how did you become a Vegan,” I said, continuing the interview.

“At home in Iran, eating meat was part of my cultural and religious heritage. When I first moved away from eating animal products, my relatives and friends predicted my health would suffer. But as I moved closer to a completely plant-base diet, I felt better: ‘lighter,’ happier and healthier than ever.  But it was not until I came to the United States, I learned that I had become a “vegan.”

“So what brought you to California?”

Parvaneh confessed, “I married my American pen pal, Alex Gray, who happened to be from Davis. We started writing when he was in college and studying Farsi. I was in Iran and wanted to perfect my English.”

She goes on to explain, “After 4+ years of writing, we decided to marry. We met for the first time in Turkey, and agreed that we were making the right decision.”

After arriving in Davis and with a growing interest in vegan cuisine, Parvaneh did her own research and taught herself to cook. For a year now, she has had her own commercially licensed kitchen and strives to run a zero waste business.

Butterfly Vegan Bakery provides healthy desserts in an eco-friendly way. The bakery goods are made super low fat, low-sugar, oil-free, and butter-free. Parvaneh uses only natural sweeteners, such as maple syrup. With a menu of more than 25 kinds of cookies and cake bars, and over 10 kinds of muffins and pies, there is something for everyone’s taste and almost all can be made gluten-free as well. The only packaging the business uses is biodegradable or recyclable. Also, bicycle delivery is available, and Davis orders are delivered FREE.

Butterfly Vegan Bakery desserts are sold by the Davis Food Coop and can be ordered online at parvaneh@butterflyvegan.com or by calling her. (202) 505-1363.

Butterfly Vegan has closed its bakery. They will offer information and tutorials on healthy baking in the future.