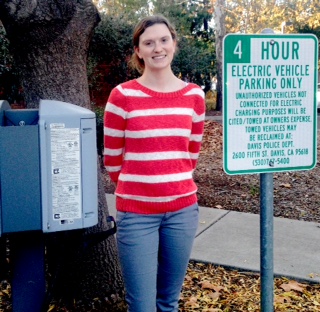 Shelby Kelley is working to better transportation with Cool Davis

(By Sam Webb) Shelby Kelley is the newest addition to the CivicSpark team as a recent graduate from the University of California, San Diego. She is tasked with improving walkability, increasing electric vehicle ownership, and getting more people to bike around Davis.

Originally from the small town of Leggett in Mendocino County, which boasts of a population of 122. In this picturesque setting she got to live surrounded by trees and nature, and gained an appreciation for the natural environment.

While at school Shelby got an internship helping a masters student on her project focusing on algal biofuels. She was given the opportunity to take over the work being done and continued developing her own research. For her senior thesis she grew and recorded algae strains and their potential for biofuel use.

“If we don’t live responsibly, future generations will only be able to see the wildlife that I grew up surrounded by in zoos. It’s important to take more than humans into account when choosing how to live your life.”

Shelby is one of two children, and her sibling, a younger brother, is attending community college in Fortuna. Her mom teaches science, social studies and PE at the local high school in Leggett and her dad owns his own auto repair business. Growing up, Shelby was always in the shop and eventually worked as a secretary and assistant for her dad. It is no surprise that she has a love for cars, especially electric vehicles, and is excited to work for Cool Davis as the transportation lead.

As a graduate, Shelby has been looking for work that aligns with her Environmental Systems degree. Shelby says, “If we don’t live responsibly, future generations will only be able to see the wildlife that I grew up surrounded by in zoos. It’s important to take more than humans into account when choosing how to live your life.”

During her job search she found the AmeriCorps CivicSpark position on craigslist and applied immediately. Shelby has had a roommate and friends who have participated in AmeriCorps programs with only good things to say so she willingly accepted the job. Signing up for CivicSpark meant she would be making a positive impact on climate change actions being done in a community instead of taking the first full time position because it was simply a job.

Outside of work Shelby enjoys being active and participates in many sports, but her favorites are volleyball and basketball. She watches Greys Anatomy, is a H-U-G-E Harry Potter fan and also collects children’s books, keeping an eye out for unique, older books.

She has only been to Davis once before in high school as part of a youth leadership group, but is excited to learn more about the town and help build community capacity to deal with the effects of transportation on climate change.