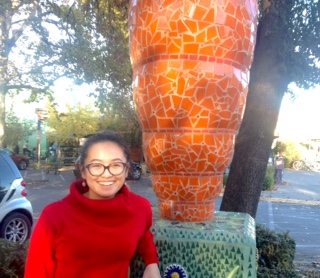 (By Sam Webb) “This is going to be fun, what an interesting and challenging project to be a part of,” says Pachia Vang who makes up one of three CivicSpark members to join Cool Davis.  “Climate change is something we are all going to deal with and I wanted to join this program and learn the skills to make environmentally sound choices as a professional.”

Pachia joins the CivicSpark team from Sacramento area, specifically Rio Linda, and will be focusing her work on household consumption; specifically, waste, water and food. She will working in the community, building capacity to reduce consumption and its related greenhouse gases.  Her sponsor, the CivicSpark program is a Governor’s Initiative of Americorps partnered with the Local Government Commission and has a total of 48 members working in nine different locations around the state.

Originally from South Sacramento, she now lives in what she describes as a sometimes hectic family of 9. The house consists of her parents, two sisters, brother, sister in law and niece, not to mention the multitudes of chickens and two cows roaming the backyard.

As the classic American success story, her parents immigrated to escape the Secret War in Laos that displaced them as refugees to Hmong camps in Thailand. Initially settling in the East Coast, her parents moved to California where they met and started a family.

After graduating high school, Pachia enrolled in Sacramento City College where she studied anthropology for three years before transferring to UC Berkeley. Continuing her anthropology studies, she took the opportunity to study abroad in South Korea, teaching English and international cultures. She ran a youth program for Hmong High School students and workshops providing cultural, educational and resource access to the Hmong community.

Pachia is very involved in her community and currently tutors at risk youth in Woodland every Tuesday and Thursday. As a committee member for HmongStory40 she is part of the project’s art and cultural exhibit team in Sacramento. This project celebrates the 40 years of the Hmong community in the US and will showcase art, textiles and renditions of different scenes throughout Hmong History.

Pachia realized her passions for art and textiles relate to fostering mindful behavior and the community value that is embedded in the environmental work that is being done. CivicSpark will challenge her, providing skills that build on her anthropology major and will help her in the future work she hopes to do in community engagement projects. As part of the CivicSpark experience she is also excited to learn professional skills such as project management and environmental advocacy.

Pachia enjoys cooking as well as DIY projects, arts and craft work. As well as being a big Harry Potter fan, both the books and the movies, her favorite TV shows are the comedy sitcoms such as Parks and Recreation, The Office, How I Met Your Mother and Community. Right now she listens to mostly electronic music, but considers herself well versed in all types of music and can enjoy just about anything.

Cool Solution for sustainable living. Discover high impact, carbon-reducing actions and ways to save through tax credits, rebates, and grants.

The #pandemic has seen a huge surge in #bike sales and Napa Valley is seeing more bikes on the trails than ever before. There is hope that growing support for biking will stick around. Read more in this article by @NapaRegister 🚲 ❗️ 🚲
https://napavalleyregister.com/business/bikes-boom/article_22ba4256-ceb0-5dd4-934a-74793f664e77.html