Home > Inspiration > At the Pond: Thanks, activists 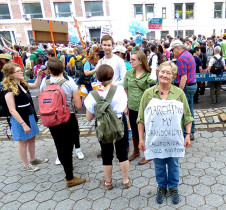 At the Pond: Thanks, activists

Cross posted from the Davis Enterprise on September 21, 2014

Happy autumn. Last Monday was the fall equinox. The sun crossed the equator and our days are now getting shorter than our nights. Changes — always a part of our lives.

Thank you to all who helped with the annual California Coastal Cleanup last weekend at many locations: 28 people cleaned the North Ponds led by Ed Whisler and 34 worked at the West Ponds. Thanks to those who showed up for the Davis Climate Action Day in Central Park, yours was one of 2,808 events held in 162 countries in solidarity with the People’s Climate March in New York.

I was thrilled to be a part of the New York march with 400,000 kindred spirits. You can’t imagine a more diverse, humorous, cooperative, kinder event. Music: Vermont shape-note singers followed by Haitian voodoo drummers and dancers. All ages, colors, shapes and sizes. Kids, babies, people in wheelchairs. Nuns in tennis shoes, Buddhist vigil groups, people marching just for the birds.

Folks were so patient when it became more of a stand than a march due to huge numbers. An eight-hour stand/march and yet people kept up their good vibes, kept repeating their little dances, skits and neighborliness with people around them.

There was not much coverage of the 400,000-person march. Guess we need stabbings and riots and murders and nastiness to make the news.

We are in a time of climate chaos. Climatologists are predicting mega droughts across the American Southwest. Global warming threatens the survival of more than 170 species of birds that live in California. Worldwide, 1300 bird species face extinction. How can this not pose threats to human health? Worst of climate predictions are the most likely. 500 Days to avoid climate chaos. And on and on about drought, fires, political instability — a product of climate change.

Join with others who want to take some action for meaningful change.

Then with the days getting shorter, there is plain old SAD — seasonal affective disorder. It’s easy to feel pessimistic and discouraged.

But there is a way to beat the blues. There’s no better tonic than action. One: Focus on some good environmental events that have happened in California. Two: Experience time in the habitat we thankfully have close by. Three: Join with others who want to take some action for meaningful change.

Some of the good climate change events that have happened in California and Davis: Our Davis City Council and staff responded to the proposed Benicia Valero crude-by-rail project with comments that displayed thoroughness and courage. The Sacramento Area Council of Governments, representing 22 cities and six counties, also submitted critical comments in spite of oil company pressure. California passed the first major groundwater regulations. We became the first state to outlaw single-use plastic bags.

West Ponds, North Davis Ponds, Yolo Basin, the Davis Wetlands, the UC Davis Arboretum, Tuleyome, Putah Creek Council — all have generous volunteers offering their sweat, time and expertise, leading tours and working on numerous projects — so that we can enjoy regional areas and enhance them.

And what action can you take to help our planet? Don’t know what to do? All of the groups above welcome volunteers. Then there is Cool Davis, Sierra Club, Yolo MoveOn, Davis Bike Club and Davis Bike Collective. It’s much more fun taking action with others.

It felt so powerful at the People’s Climate March, when we all stopped for two minutes of silence in commemoration of the first victims of the fossil fuel industry. People were present whose neighborhoods have been wracked by fracking and polluting refineries, people whose homes were lost due to record flooding, people whose water has been contaminated by oil spills.

Then we broke that silence with lots of noise. That’s what we united to do; make lots of noise about global warming and climate change until we waken our leaders to take bold action. Anyone who has ever marched in solidarity knows that it is hard to explain the power one can feel with that.

Many of us have marched for civil rights, or to stop the war in Vietnam. Now we have climate chaos, and to arrest it we will need a war effort with all of us working together. Start by informing yourself.

Get a friend to sit down with you and go to watchdisruption.com on a computer. It’s a 52-minute movie that will inform you; arm you with intentions, ideas.

And to change everything we need everyone.

Go to Facebook, Friends of North Davis Ponds to see the list of 175 birds spotted by Chris since 2005 in the area and the list of mammals and amphibians spotted by Ed Whisler. Facebook: Friends of West Pond has a rich collection of photos and videos.

And kiss each day.

— Jean Jackman is a Davis resident. Her columns appear monthly. Got a question, comment, correction? Contact her at JeanJackman@gmail.com.