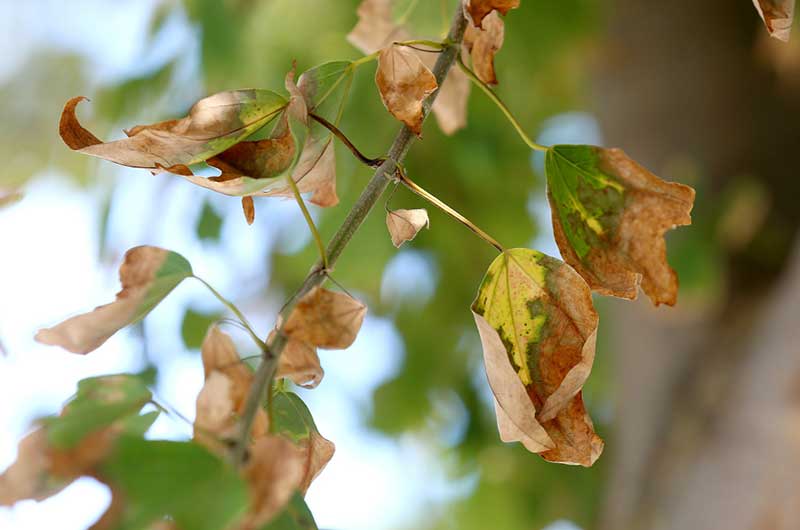 Cross posted from the Davis Enterprise | Photo by Sue Cockrell/Enterprise

Got a brown lawn? You might have a dying tree, too.

As trepidation about the city’s plans to raise water rates and calls for conservation sink into Davis’ conscience, the city’s urban forestry manager says many people have simply let their lawns die and have forgotten to water their trees.

Rob Cain said of his 20-year career in urban forestry. Cain added that he was not yet old enough to work in the last big drought in the late 1980s, much less the late 1970s drought.
Cain is working hard these days identifying and getting ready to take care of at least 65 city street trees and counting that have died for lack of water. That doesn’t figure in many more on private property that are suffering.

Tree Davis is teaming up with Cain to get the word out about deep-watering trees at a cost of pennies per month for 10 gallons each week. Eight pennies, if you go by current water rates. Fifteen of them, if proposed water rate increases go into effect.

That’s chump change compared to how much McAleer said trees boost property values according to the U.S. Forest Service: 12 percent.

First things first: Get rid of turf or shrubs around the trunk of your trees, McAleer said. Replace that with mulch.

“Then we recommend taking your hose or a 5-gallon bucket and soaking the tree depending on how much water it needs or how hot it is,” he said.

Tree Davis says the difference between city street trees and private trees — totaling an estimated 15,000 trees across the city — are that city trees are within 10 feet of a road or public utility. Still, those city trees need water, too, and Cain isn’t quite able to go around watering them all.

Young trees take extra-special care in the first couple years or so of their life. McAleer said careful watering and pruning of the trees, as well as stabilizers as a defense from the north wind, will help young trees grow into healthy, well-rooted and more easily manageable trees than those allowed to grow up wild in their first years.

“Tree selection is an issue, too,” he said. “It’s a thing people have gotten better at over time.”

Unfortunately, trees grow slowly, and the city is stuck with some bad choices in the past, like planting coastal rain-loving redwoods in arid Davis. However, they do look great, McAleer said.
“The look of the tree is important for most people, but for us it’s the right tree in the right place,” he said.

Cain said the city has a master list of advisable trees to plant in the city — ones that use less water, may not necessarily be native, but will drop less tree debris than others not on the list.

Cain said he’s seeing more trees added to the death list “every day.”
Needless to say, trees dying in Davis is a cause for environmental concern, McAleer said. Trees provide oxygen, suck up carbon, storm water and — oh so important this time of year — provide shade.

Plus, with his 22-year-old organization started by Lois Wolk, who is now a state senator, trees have proven to be important to local residents for quite a while.

"Slow and steady wins the race. Walking poles help. We used the same down sleeping bags we purchased when we arrived in Davis 50 years ago. Patched but still a delight. And the same, easy-to-put-up-in-five-minutes tent we’ve used for years. Good camping gear pays for itself many times over." ... See MoreSee Less

Wildflowers are blooming in profusion, even crowding the hiking path just two hours away in the Eldorado National Forest where you can go and hike and camp for free. And you can do extreme social dist...

At the Pond: Free camping, hiking, cooler weather via @alldenews

Wildflowers are blooming in profusion, even crowding the hiking path just two hours away in the Eldorado National Forest where you can go and hike and...