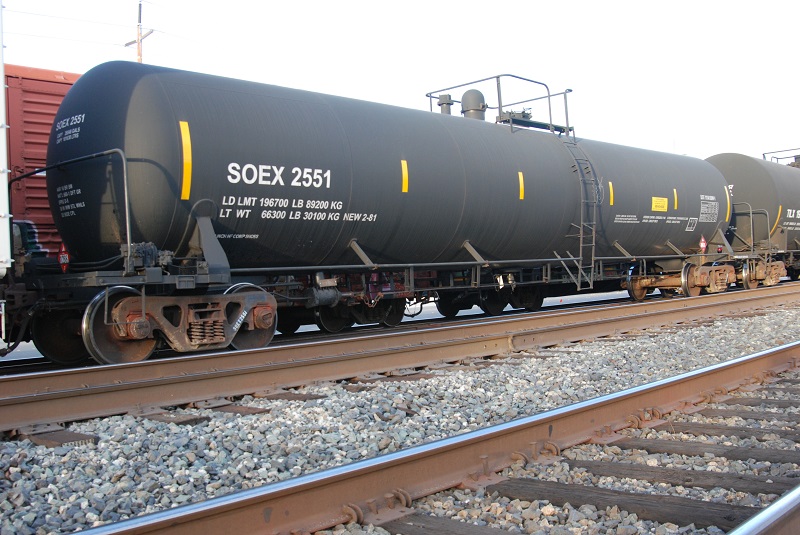 North Dakota Bakken crude oil production is booming, and oil companies are desperate for a fast, convenient way to transport their crude oil to refineries across the U.S. A vast network of railroads crisscross the nation, making “unit trains,” long trains of 100 oil tank cars or more, an efficient and flexible method of transportation.

We don’t know just how many oil trains came through Davis in 2013, but if Bay Area refineries such as Valero in Benicia have their way, crude oil trains will soon be coming through Davis every day.

Never mind the added carbon dioxide entering the atmosphere by burning Bakken Shale oil.  Never mind that California and the US should not be expanding or even facilitating fossil fuel infrastructure at a time when we should leave fossil fuel in the ground and pursue renewables instead.

But the long trains of tank cars with their volatile cargo pose an immediate health and safety risk.

But the long trains of tank cars with their volatile cargo pose an immediate health and safety risk. Last July, 47 people perished in a massive fireball when a train containing Bakken crude derailed and exploded in the Canadian town of Lac-Megantic, Quebec. Four more oil trains have derailed in Canada since then.

Increasing numbers of accidents and spills

In November, a train carrying the same Bakken crude derailed in Alabama. Twelve of the cars exploded, fortunately not in a populated area. In the last week of December, another 18 tank cars carrying Bakken crude derailed and exploded two miles outside of Casselton, North Dakota. The town was urged to evacuate to avoid the plumes of toxic smoke from the ensuing fires that burned for more than a day.  Soon after, another oil train derailed and exploded in Canada.

The propensity for these tanker cars to rupture and explode on impact make them the Ford Pinto of the rails. Furthermore, it’s becoming clear that the chemical composition of Bakken Shale oil itself is highly explosive.

Trains carrying the same highly flammable material in the same outdated DOT-111 tank cars already pass through the center of our home town. The propensity for these tanker cars to rupture and explode on impact make them the Ford Pinto of the rails. Furthermore, it’s becoming clear that the chemical composition of Bakken Shale oil itself is highly explosive.

The tank cars mostly transport the flammable Bakken crude from North Dakota, but some Alberta Tar Sands bitumen also passes through Davis. On the way to the five Bay Area refineries, the tank cars pass through Roseville, Sacramento, West Sacramento, Davis, Dixon, and Suisun, crossing sensitive natural areas including the American and Sacramento Rivers, the Yolo Bypass, then cutting through the protected Suisun Marshes to travel alongside Interstate 680 to Benicia.

Train companies extol the safety of oil trains, but recent accidents clearly show that the health and safety of our families and community are put at risk with each train. The risk is increasing as each of the five Bay Area refineries plans to process more Bakken and tar sands crude, from both increased crude-by-rail and boat shipments. Valero Benicia is only one of several proposed Bay Area projects that may impact Davis.

Last summer Valero petitioned Benicia to allow the oil refinery to enlarge its train terminal in order to increase its production by 70,000 barrels of crude every day. That’s enough to fill 100 sixty-foot tank cars with highly flammable crude oil. The Benicia Planning Commission has the power to approve the new rail terminal….or turn it down. Responding to pressure from citizens and a study prepared by the National Resources Defense Council, Benicia is currently preparing a draft Environmental Impact Review (EIR) for the project that will be available for written public comment approximately the end of January.

So what can Davis citizens do? Though the city of Davis cannot regulate trains that pass through it, we are far from helpless. Since significantly increasing the number of trains to Benicia affects us in Davis, concerned citizens and our elected representatives can take advantage of the 45-day written comment period on the draft EIR report. Citizens can work with our city council and county board of supervisors to submit comments with supporting evidence that address at least the following concerns:

• The old DOT-111 tank cars need to be upgraded or replaced by safer tank cars with thicker shells and puncture/rupture-resistant shields, stronger valve fittings to prevent spills and fires if the cars should derail, and tanks that can withstand corrosive sulfur. The recent oil company order for 60,000 new DOT-111 tank cars should be cancelled unless they are upgraded models. This will be very costly for the industry but protecting the public is critical.

• The Bakken crude has proven to be more corrosive, sulfurous, or loaded with explosive gas than previously thought, and large amounts of vapor pressure can build up to dangerous levels. Already the Pipeline and Hazardous Materials Safety Administration (PHMSA) has issued a safety alert to notify the general public, first responders, and shippers and carriers that recent derailments and resulting fires indicate that the type of oil being transported from the Bakken region may be more flammable than traditional heavy crude oil. PHMSA is reinforcing the requirement to properly test, characterize, classify and where appropriate sufficiently degasify hazardous material (known as flaring) prior to and during transportation. Trains of Bakken Crude should be placed in a higher risk hazmat category. Accurate labeling will in turn determine how the Bakken crude can be transported. The proper management and transport of the Bakken crude may also be costly, but safety demands it as trains run through city centers across the country.

• Safety regulations for rail transport including regular inspections must be thoroughly reviewed and then strictly enforced by the federal government. There is evidence that enforcement has been lax.

• Problems caused by under-crewed trains, track failures, speeding downhill, obstacles on tracks and other problems that have all caused derailments in recent months need to be specifically addressed by the federal government.

• Remove the exemption for rail shipments of hazardous materials for the Emergency Planning and Right-to-know law, so communities at risk can be informed of risks they are subject to if they are living or working near rail lines. This includes the nature, volume and frequency of hazmat shipments and what to do to be prepared in case of an accident. Emergency responders need to be aware of any hazards posed by the materials being transported through their communities, and plans for a coordinated response need to be developed.

• The health, safety and environmental concerns of all up-rail communities need to be taken into consideration and fully mitigated, according to the outcome of the ongoing investigations of recent derailments and explosions and the degree of exposure to risks.

Davis has an opportunity to reach out to its neighbors in Roseville, Sacramento, West Sacramento, Woodland, Dixon, Vacaville, Fairfield and Suisun who will share the same risks to their health and well-being as crude-by-rail transportation increases.

It is critical that Davis and all up-rail cities get involved at this point. It would be wise for the up-rail communities to make comments in concert to amplify their effectiveness. Davis has an opportunity to reach out to its neighbors in Roseville, Sacramento, West Sacramento, Woodland, Dixon, Vacaville, Fairfield and Suisun who will share the same risks to their health and well-being as crude-by-rail transportation increases. The Board of Supervisors for Yolo County should also be invited to join in a united response, along with environmental groups such as Natural Resources Defense Council, Sierra Club Yolano branch, Sierra Club Mother Lode chapter, Yolano Climate Action (a Cool Davis working group including 350 Davis, move-on, etc.), and other interested groups.

Building a strong coalition now will help as Tesoro Martinez and Wes-Pac Pittsburg Energy have proposals for more crude-by-rail that also may come through Davis. Ultimately, a strong voice will give additional leverage to demanding intervention at the federal level.

The Davis Natural Resources Commission (NRC) has added crude-by-rail transport and comments for the Benicia Valero EIR to their January 27th meeting agenda at City Chambers at 6:30 p.m. All are welcome to join in the discussion.

For more information including studies by the Natural Resources Defense Council, an eleven-page commentary by attorney General Kamala Harris, and a photo gallery, and an annotated list of articles, visit www.yolanoclimateaction.org