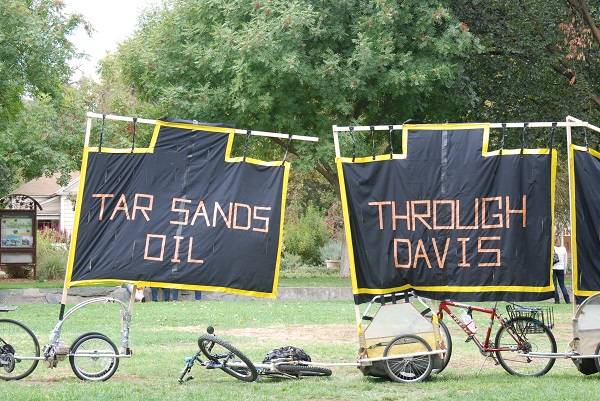 Just one accident and we will all feel the burn
In our eyes, with our lungs sulphurized

On September 21, a group of dedicated Davis activists drew the line on tar sands crude, along with 145 other protest actions across the country. The thick bitumen should be left in the ground, not mined at the expense of Alberta’s temperate forests using harsh chemicals that result in toxic tailing ponds and down-stream pollution, then hauled across the country by rail eventually through Sacramento and Davis on the way to bay area refineries.

According to a recent report by Forest Ethics, those refineries are now the equivalent of coal-burning power plants, thanks to the high sulfuric content of the bitumen they now accept. The report cites Benicia’s Valero plant as one of the top five sulfur dioxide producing refineries in the country, and now Valero is requesting an additional rail terminal to receive 70,000 barrels of crude more per day.

A handful of activists made five cloth 8 x 8 foot “oil tankers” pulled in bike carts with the message, “No dirty tar sands oil through Davis! Stop Climate Chaos. 350.org.” In their first attempt to bike from west Davis to central Davis, the north wind tore the banners. But the discouraged bikers transported the bike carts by van to the calmer downtown area, mended the shredded banners and soon the parade of 32 was circling Central Park and waving to the crowds.

Meanwhile, the one and only fall rain storm darkened the skies. Just as the bikes made a dramatic backdrop around the Rotary Stage and others set up the microphone for speeches, the rains began. Eve Bessier sang her original Valero song in a drizzle. Kim Stanley Robinson spoke in a downpour. Anya McCann truncated her address on meatless Mondays to a few sentences and Kerry Daane Loux finished in fewer words still. The hoped-for Farmers Market crowd stayed under the market awning too far to hear even Eve’s strong voice.

This demonstration was not just a cameo appearance. Those of us who have uncovered the truth of these rail tankers of dangerous crude oil passing through Davis will continue to speak out to awaken our community to a present and escalating danger.

To subscribe to the list serve, email lnittler@sbcglobal.net with join list serve in the subject line. Give the first and last name and email address you wish to use to subscribe. If you are persistent, you can sign yourself up at yolanoclimateaction-subscribe@lists.riseup.net

Visit the Yolano Climate Action Central website for information, the calendar of events, carpool options, and resources. www.yolanoclimateaction.org is a go-to place for local climate actions and events of the greater Davis area. Many of the items sent by the list serve will also appear on the website as well as other resources. It will be easy to arrange carpooling to events on the website.

Check dates for climate actions on the Yolano Climate Action Calendar.
You can access the calendar of events with postings from all the various groups easily from the website or copy this address into your browser: https://www.google.com/calendar/embed?src=gvh6hemmsj0j27u9qavei0pe8g%40group.calendar.google.com.