Home > Transportation > I Believe in Riding a Bike to Work 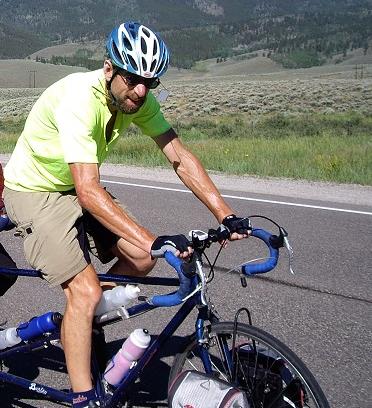 I Believe in Riding a Bike to Work

I commute 180 days a year to Winters High School where I teach English. Like most people who ride a bike to work, I love it. Sometimes I think of a great lesson plan. Sometimes I obsess over a difficult interaction with a student. And sometimes the ol’ mind wanders and watches the world for a glorious hour and a half. I’ve never missed the first robins of spring or the pungent almond blossoms bursting open. For a good part of winter, The morning commute is black except for my headlight and the stars. At 6:30 a.m. Putah Creek Road is empty, so I often turn off the light. It’s a slice of the sublime.

Like most people who ride a bike to work, I love it.

Bicycle commuting is not always joyful. The bluebirds are not always singing. Sometimes it’s cold, wet, or it’s cold and wet. There are days when I’ve taken the wrong gloves. By the time the fingers start feeling the pain, I’m two miles from Davis, and it’s too late to turn back, so it’s a scream fest the rest of the day. I’ve been sprayed by crop dusters every now and then. But no matter how bad the commute is, when I don’t ride, I get the anxious feeling that something isn’t right, like when you brush your teeth but forgot to floss.

Students and friends sometimes tell me this commute verges on heroic. But that is wrong. I decided to try it one day and liked it. And then a second day, and then soon it was part of my life, and I couldn’t image a life without it. I imagine with a little imagination, most people could commute by bike to their work. It’s a built-in daily workout. Its carbon footprint is minuscule. The price of gas would no longer matter.

I decided to try it one day and liked it. And then a second day, and then soon it was part of my life, and I couldn’t imagine a life without it.

My commuter is a 1991 Giant Cadex that has over 80,000 miles. Often students ask about it. The other week, I told them that if I have a heart attack and die in the classroom, I’d like them to cremate me and fill the bike tubes with my ashes. They were grossed out, and it probably wouldn’t work, but I do love that bike. I suppose that if someone were to take a poll five years after graduation and ask students what they remembered from Mr. Biers-Ariel’s class, the majority would answer, “He’s the guy who rode his bike from Davis.” If that were the case, I wouldn’t be sad.

Check out Matt’s book, The Bar Mitzvah and the Beast : One Family’s Cross-Country Ride of Passage by Bike for more of his commentary on biking and life.