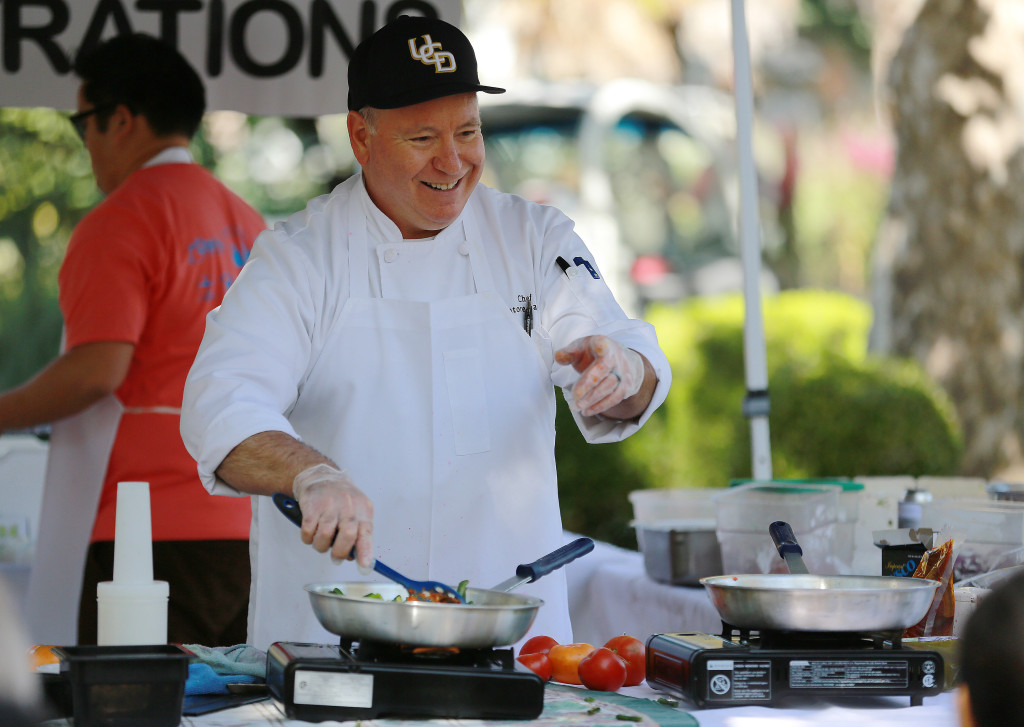 Cross-posted from the Davis Enterprise, one of Cool Davis’ sponsors for the festival

A rich aroma of sizzling garlic and green beans in a bubbling orange-colored curry wafts skyward from a smoking cast iron pan.

An audible “mmm” is heard, emanating from somewhere within the crowd that’s gathered to watch the cooking demonstration at the Cool Davis Festival in Central Park on Saturday.

UC Davis Chef Sal Gagliano was responsible for the fragrant display. And besides the tasty indulgence it offered (in the form of free samples), it fit thematically with the annual festival’s environmentally friendly purpose.

“All this produce is sourced from (UCD’s) Student Farm,” Gagliano explained. “I go out there with the grower and see what’s fresh and vibrant, and that’s what I’ll cook with.

“It’s organic produce that’s grown really just across the street, no more than five minutes away. That’s as good as it gets when it comes to reducing a carbon footprint.”

Gagliano’s cooking demonstration was just one in the vast array of activities designed to inspire local residents to reduce their carbon footprints. This is the third annual festival.

Her “unplugged kitchen” tactics were complemented by a booth set up just a few feet away, where Solar Cookers International representatives spoke to people about how to cook with the sun.

These insights are significant, given that Davis city staff found in the greenhouse gas inventory it conducted in 2005 that more than 75 percent of local emissions were generated simple daily activities — cooking being one.

And across Central Park’s verdant grounds was a less appetizing — for humans, at least — exhibit that answered what people could do with the extra scraps that come along with cooking: feed them to worms.

That’s right, Worm Endings Unlimited’s Debbie Stevens explained that worms can convert organic waste into a reusable form of compost and keep it out of the landfills.

And judging by her business card pseudonym, “The Worm Lady,” Stevens is committed to the all-natural composting method. She explained how that began:

“My impetus was when I moved to a condominium and didn’t like throwing out all the kitchen garbage. I knew that worms could eat all the junk and turn it into beautiful soil.”

Other solutions galore were on display for community members who attended the festival — from energy-efficient appliances to plug-in electric vehicles.

There were also interactive activities that had locals reflecting on how much they’ve done to reduce their own carbon footprints.

At one booth there was a cylindrical tower full of pebbles, each representing the different efforts people have made to reduce greenhouse gas emissions.

A woman crouched in front of the booth was asking her young daughter, “do we usually bike places?” To which the girl nodded, and the mother replied, “then grab a stone!”

The more than 3,000 estimated attendees also were treated to some light-hearted entertainment: jugglers, bubbles, face-painting and live music.

“And its success is owed to the coordination and cooperation of an awful lot of people,” Loux added. “Everyone did an inspiring job of getting people interested in carbon footprint reduction.”