Home > Consumption > Market Team Helps get us All to Zero Waste 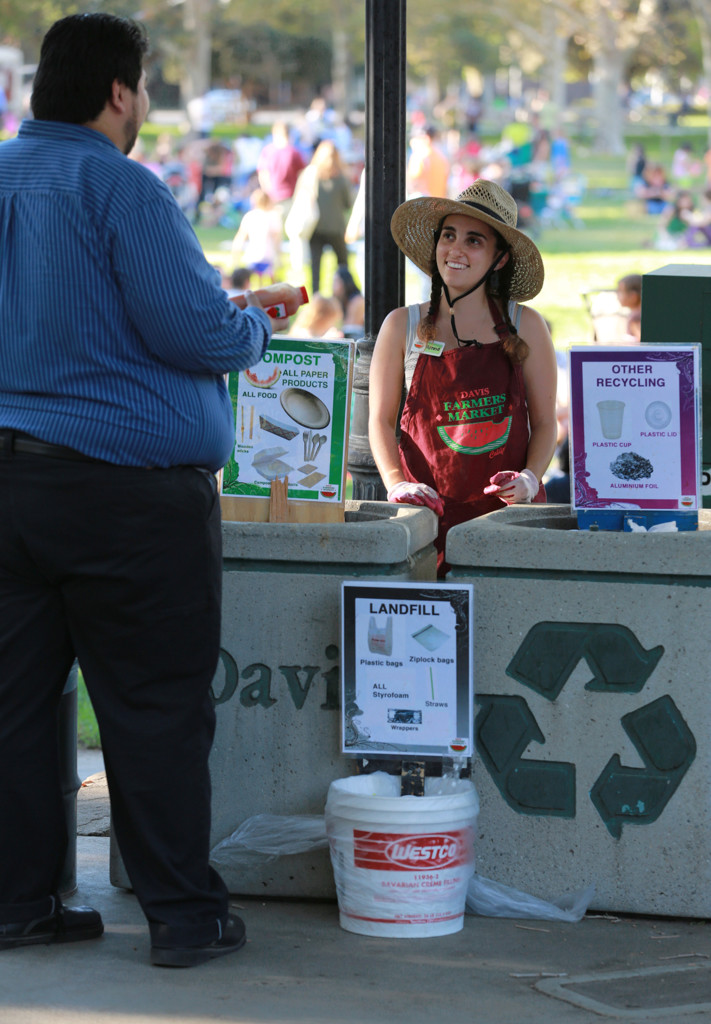 Market Team Helps get us All to Zero Waste

This article is cross-posted from the Davis Enterprise. It was written by Anne Ternus-Bellamy.

When was the last time someone cheerfully welcomed you at a garbage can?

If you regularly attend Picnic in the Park, probably quite recently.

That’s where the Zero Waste Team,composed mostly of UC Davis students, helps Davis Farmers Market patrons separate and dispose of their garbage, and in the process, divert more than 90 percent of waste from the landfill.

Standing beside receptacles, the team instructs people on what goes in compost, recycling or landfill.

“I always joke and say so when people ask me what I did over the summer,” she said. “And it’s true, we do a lot of that. But it isn’t really about the trash. Our waste system works well enough for people if you ignore the environmental factors. You put your trash in a bin, and you forget about it. We take our trash situation for granted.”

However, she said, “We overlook the fact that our trash goes somewhere, and it is crucial for people to realize and really understand that the trash can doesn’t magically convert waste into thin air. The importance of us being at the Farmers Market isn’t really about diverting trash from the landfill at one place at one time, but sending more people home with the idea that zero waste is needed everywhere.”

Onabe was one of three interns working Picnic in the Park during the summer. With UCD back in session, more students will now be joining the Zero Waste Team to help out at the campus farmers market as well. That market debuted Wednesday at the Silo on the UCD campus.

Hanna Morris, coordinator of the Zero Waste Team and a fifth-year environmental science and management student, said most Picnic in the Park visitors are enthusiastic about sorting their garbage.

Most Picnic in the Park visitors are enthusiastic about sorting their garbage.

“They’re willing to put in the extra five seconds it takes,” she said.

Others — more often out-of-towners than locals — may go along with it grudgingly, she said, or even “passively protest” by simply piling all their garbage on top of a container and walking away.

“I’ve gotten a few complaints,” Onabe said, “but most of the trouble was people (who) simply don’t care. There were people who dumped plastic bags full of trash into the compost without a second look, and people that would glance at the signs and decide that their ice cream belonged in the recycling. It is frustrating, especially if you are standing right next to them ready to help. Even worse, I had to dig out the ice cream.”

“But most people thank us,” Morris said, “even if they are surprised to have people greeting them at the trash cans.”

Morris said the amount of Farmers Market garbage headed to the landfill has dropped over the years, but some still accumulates every Wednesday. Plastic shopping bags, straws, diapers and various items people bring from home are most common.

“Community members can help by bringing their own reusable stuff to the market,” she said.

Like Onabe, Morris started as a Zero Waste Team intern, eager to do her part to reduce waste while also enjoying her favorite thing about Davis — the Farmers Market. Now as coordinator, she’s paid by the Davis Farmers Market Association.

She and the other team members are proud of what they’ve accomplished at the Farmers Market and hope to see the success spread throughout the community.

“I think we have more trouble reducing landfill waste outside of the Farmers Market,” Onabe said, “because things like composting bins and compostable plastic are not so readily available. I believe this is something we have to work on changing as citizens of Davis.”