Home > Events > Cool Davis Festival: Getting Cooler all the Time! 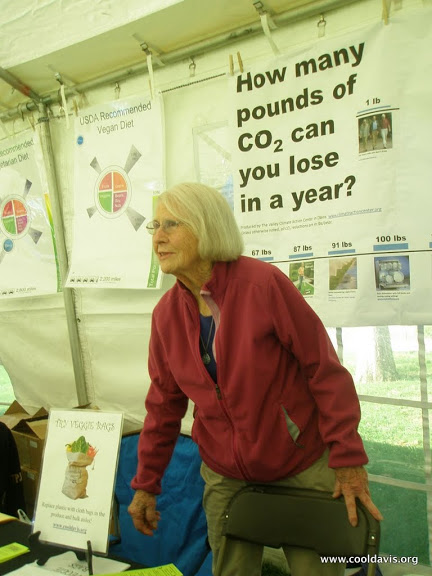 Cool Davis Festival: Getting Cooler all the Time!

This article is cross-posted from the Davis Enterprise, Sunday, September 15, 2013.

It’s a Festival! The City of Davis, officially named ‘Coolest California City’ in June 2013, is celebrating our One Cool City. Join neighbors and friends on Saturday, October 12, 8:00 am to 1:30 pm, at Central Park next to the Farmers Market for this fun, informative, community-based event. There will be entertainment, family activities, interactive exhibits and lots of information to reduce your carbon footprint through the choices you make about your home and garden, transportation, food and healthy lifestyle.

This is an important time to increase efforts to reduce greenhouse gases. Recent climate news warns that CO2 measurements in the atmosphere have now reached 400 ppm. As a point of reference, in 1970 the level was under 325 ppm, and for the 2000 years prior to 1900, the level held steady at about 275 ppm, according to an NPR.org article, May 10, 2013.

The article noted, “The CO2 number’s physical meaning is straightforward: out of one million air molecules, 400 are carbon dioxide. That’s 0.04 percent. But that small number packs a big punch. It is one of the clearest measures of how human beings are changing the planet and shows how much carbon we have put into the air. And carbon dioxide drives global warming.”

Human beings can change that outcome by working individually and as a community, nation and world to decrease our carbon footprint.

This is why Cool Davis was formed in 2010, following adoption of the City’s Climate Action and Adaptation Plan. “Cool Davis is dedicated to helping Davis succeed at reaching our adopted goal of carbon neutrality. Our vision is to get every household, business and community organization working on carbon reduction and then, together, to build renewable sources of energy into our collective footprint,” says Judy Moores, Cool Davis Foundation (CDF) Board President.

Adds Bill Heineke, CDF Treasurer, “While we are working on a global issue, the solution starts with each one of us and the individual measures we can take to reduce our personal climate impact.”

Davis citizens can learn how to contribute to these goals at the Cool Davis Festival.

Put the Festival in your Calendar!

The Cool Davis Festival is happening Saturday, October 12, at Central Park between 8:00 am and 1:30 pm alongside the Davis Farmers Market.

The Festival is free. So come on out. Ride your bike, take a walk or get on the bus. Unitrans is offering free bus transportation all day, Saturday, October 12.

Festival Exhibits and Advocacy
The Cool Davis Festival will have representatives of local climate advocacy groups and exhibitors showing solutions related to transportation, the built environment, your house and garden, and consumption, such as health/nutrition, shopping and other lifestyle choices.

Start at the Cool Solutions Center on the green. Residents can pick up a checklist to see how far along their household is toward carbon neutrality, and to assess their next energy- and cost-saving steps. Completing the questionnaire puts visitors in the free Cool Davis drawing for great prizes. Visitors can select a free Cool Davis Veggie Bag to replace the plastic bags offered in the produce aisles, and you can use it as a model to make more.

Three hours of food and household product demonstrations will provide both the how-to and tastes of great recipes using fresh Farmers Market produce, including ‘Unplugged’ low energy meals with Chef Debra Chase and ‘Healthy, Low-Cost Meals for Small Households” featuring UC Davis Chef Sal Gagliano, owner of cookingpartys.com. For the first time this year Dan Flynn, of the UC Davis Olive Center will conduct olive oil tasting and provide insights about olive oil production around the world. Solar cookers International will be onhand to talk about cooking with the sun.

Bike Circus and Plug-in Electric Vehicle Show & Tell
On Third Street, Davis Bicycles! is creating a bike circus with a bike safety course and other cycling activities such as bike polo for everyone to join.

At the other end of the park, Plug-in Electric Vehicle Show & Tell will feature Chevy Volt, Nissan Leaf, plug-in vehicles from Ford and many others, with local owners and car dealers answering any question under the sun about electric cars.

Individual actions add up!
In face of serious warnings and evidence of a climate crisis, Davis residents can focus on how each individual action reduces our collective carbon footprint. Converting just one household trip per day to a bike ride or a walk has an impact. Reduce, reuse, and recycle as a way of life reduces waste. Look ahead to incorporate environmentally sensitive choices into actions and planned purchases. These and other relatively easy steps can do a world of good.

“We are already known as an engaged community, and the city is working on specific activities to encourage people to reduce greenhouse gas emissions, so we’re getting cooler all the time,” said Chris Granger, executive director of the non-profit, all-volunteer Cool Davis organization. “Join us on Saturday, October 12. Be part of the solution, and have a great time, too!”

For more information, go to www.cooldavis.org.