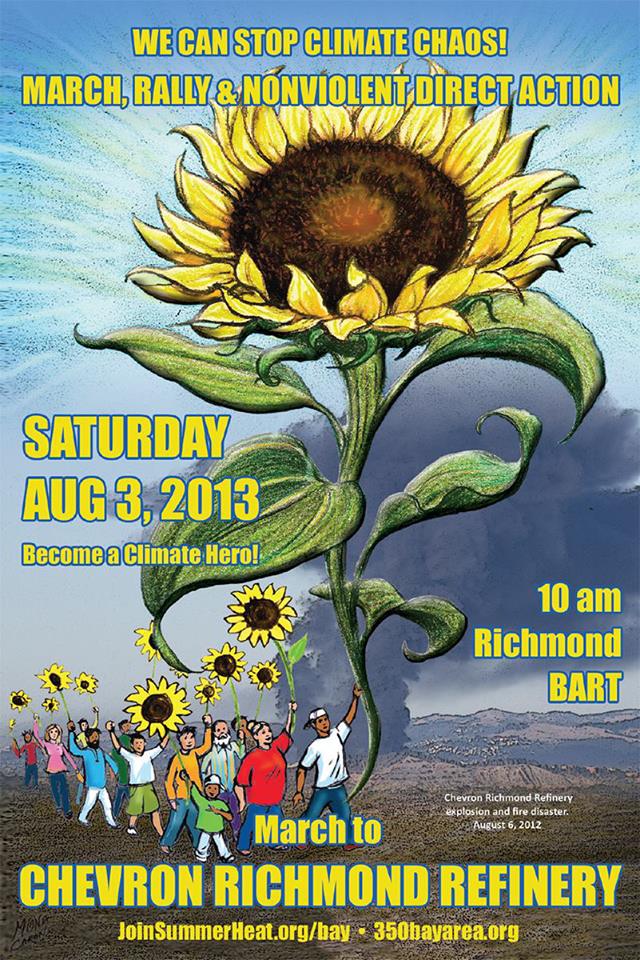 Come and join Davis residents protesting at the power of Big Oil over our politics and lives by attending a march and rally to the Chevron Refinery on Saturday August 3.

The march and rally which will leave from Richmond BART station at 10am on August 3 will walk to the gates of Chevron’s refinery. It will commemorate the infamous explosion and fire of a year ago, whose toxic mushroom cloud sent 15,000 Richmond residents to emergency rooms and is still causing serious health problems.

The march, led by a children’s brigade, will conclude with nonviolent direct actions carried out by affinity groups, some involving sunflowers, known for their ability to absorb heavy metals from the soil. These actions will be carried out peacefully and carefully separate from those who cannot or do not wish to risk arrest.

Since last year’s disaster, Chevron has failed to replace the sulfur-corroded pipes that led to the explosion, and it plans to bring in yet more high-sulfur, carbon-intensive tar sands crude for refining, with serious potential impacts on Bay Area air quality and even greater impact on our atmosphere.

This high-profile mobilization, part of 350.org’s nationwide Summer Heat campaign, brings together over 50 local and national organizations: the Richmond Progressive Alliance, Communities for a Better Environment, the Asian Pacific Environmental Network, the California Nurses Association and many local unions, as well as national environmental networks and social justice organizations.